Taking place two years after Jedi Knight: Mysteries of the Sith, Kyle Katarn is a Jedi Oucast, having given up on his training and returned to his mercenary ways - and long-time love interest Jan Ors. Alerted by a possible threat comign from Imperial Remnant space, Katarn and Ors discover that the Remnant is conducting experiments on crystals capable of storing the power of the Force.

With first-person missions that takes Katarn to Yavin IV, Bespin, the Hutt enclave of Nar Shadda in a quest to prevent the Imperial Remnant from destroying the Jedi Academy he had turned his back on.

After returning to the Jedi Academy and spending the following two years to complete his training, Katarn and his apprentice - Jaden Korr - discover a secretive Sith cult working with the Imperial Remnant. Pursuing a series of clues they are led through the Expanded Universe until they reach Korriban where the future of the Jedi is played out.

There's a mindblowing variety of options, with all kinds of exclusives - such as USB memory sticks, enamel pins, steelbooks, art cards, posters and booklets - packaging variations and money-saving bundles so head over to Limited Run Games and check out the region/DRM free selection on offer. 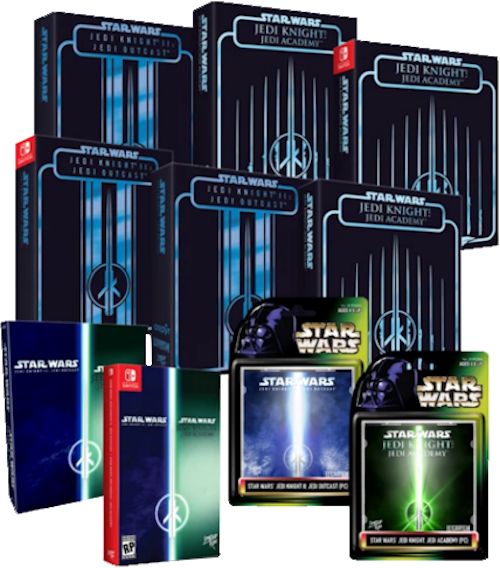 Starting at 10am and then again at 6pm ET this Friday (April 24th), Limited Run Games will be taking pre-orders for Jedi Knight II: Jedi Outcast and Jedi Knight: Jedi Academy. While these are a release for the PC, they've never been available for the Playstation 4 and Nintendo Switch before!

The pre-order period close at 11:59pm on Sunday, May 24th and the finished product will typically ship around August or September.
SEND