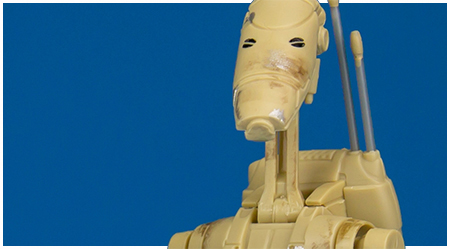 Rather than use flesh-and-blood warriors, the Separatists prefer mindlessly loyal soldiers that are easily controlled. Battle droids are dim-witted and no match for clone troopers or Jedi, but they weren't designed to be smart - they were designed to overwhelm Republic civilians through sheer numbers, something they do very effectively.

The Battle Droid featured on this page was released as part of the twentieth wave of The Black Series 2019 assortment. Officially revealed at the 2018 MCM London Comic-Con, the Battle Droid is a sculpt debut. It includes two backpacks: one standard, one commander, and a Battle Droid blaster. the blaster can be pegged into the standard backpack. The Battle Droid began shipping in February 2019 along with Padmé Amidala, Vice Admiral Holdo, Dryden Vos, Mace Windu, and Han Solo (Mimban) action figures.

« Back To The Black Series 6-Inch