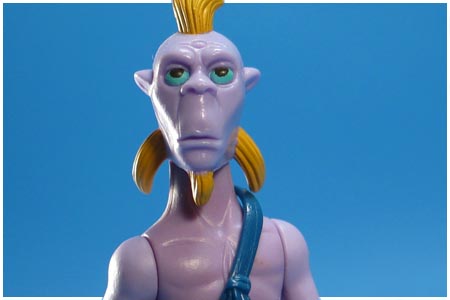 Of all the figures in the first and only- wave, all but the A-Wing Pilot and Boba Fett were unique. The Artoo-Detoo (R2-D2) figure was a repaint of The Power Of The Force Artoo-Detoo (R2-D2) With Pop Up Lightsaber figure and the See-Threepio (C-3PO) figure was a repaint of The Empire Strikes Back See-Threepio (C-3PO) With Removable limbs figure. The Boba Fett came with a Stromtrooper blaster moulded in black plastic. Only the Droids and The Power Of The Force versions of Fett have the black version of the weapon. All other figures were completely new sculpts.

A second wave was underway and planned for a 1986 release but never saw production. The second wave, had it hit shelves would have included Admiral Screed, Gaff, General Koong, Jessica Meade, Mon Julpa, Mungo Baobab, Kleb Zellock, and a domestically released Vlix figure.

Back To The Droids Photo Archive