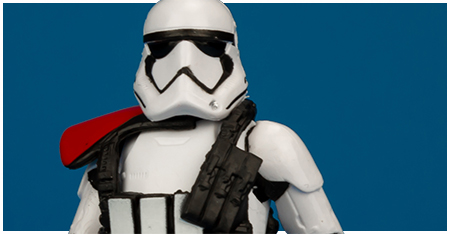 Technically speaking the First Order Stormtrooper Officer action figure featured on this page is a new character since it is the debut release of The Last Jedi armor configuration of this ranking member in the Supreme Leader's armed forces, but it utilizes parts previously offered. It was released as part of the third wave of action figures in Hasbro's Solo branded Star Wars Universe Force Link 2.0 3.75-inch collection. It began hitting shelves in September 2018 along with the awesome A New Hope Darth Vader, and Force Link 2.0 versions of the previously released Return Of The Jedi Luke Skywalker and The Last Jedi Rey (Jedi Training) action figures.

Back To The Solo - Star Wars Universe Force Link 2.0 Collection