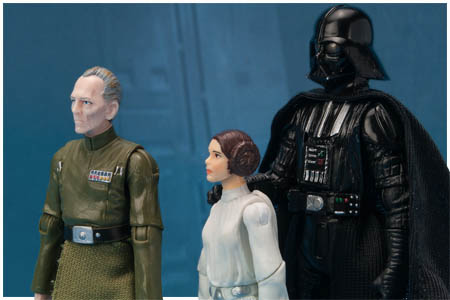 About Damn Time
Answering the pleas of thousands of collectors, the fifth wave of figures in Hasbro's 2012 Vintage Collection gave us, for the first time ever, Grand Moff Tarkin from A New Hope on a Kenner card. In addition to this the wave also offered four other brand new figures including Odd Ball (Clone Pilot) from Revenge Of The Sith, Nikto (Skiff Guard) from Return Of The Jedi, Starkiller (Vader's Apprentice) from The Force Unleashed, and Shae Vizla (Old Republic Bounty Hunter) fromThe Old Republic.