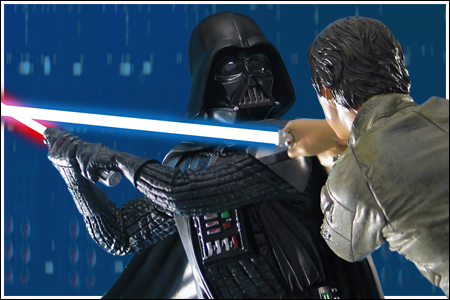 I Am Your Father Diorama
Sideshow Collectibles revealed one of the most dynamic additions to their Star Wars diorama collection on June 2nd, 2011. The 'I Am Your Father' Luke Skywalker Vs. Darth Vader diorama respected the source material like never before and looks like a frame right out of the epic battle that pitted father against son seconds before the revelation that shook the original Star Wars Generation to the core. This statue went up for pre-order one week later and began shipping in the last week of April 2012.

Back To Sideshow Collectibles