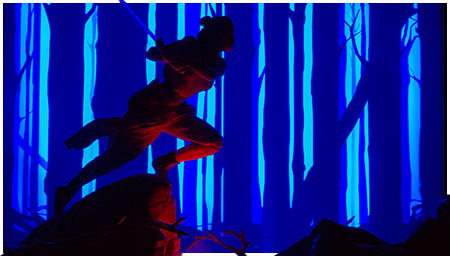 As the ice-covered tundra of Starkiller Base crumbles, Rey channels the raw power of the Force to defeat the dark warrior, Kylo Ren. Experienced with her salvaged quarterstaff from Jakku, Rey finds that years of practice at hand-to-hand fighting serves her well when she is forced to use a Lightsaber in combat.

When her blue-bladed Lightsaber - one passed through generations of Force users - clashes with Kylo Ren's unconventional fiery blade, Rey recalls the words of Maz Kanata: "Close your eyes... Feel it. The Light. It has always been there. It will guide you."

Though Rey has yet to receive full training, her connection to the Force is as undeniable as she is resilient. While the young scavenger once dismissed herself as "no one", Rey soon realizes that her life is being shaped by the mysterious power of the Force.