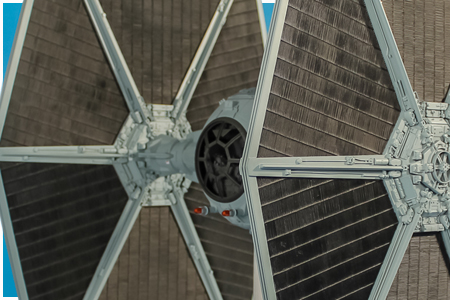 eFX Prop Replica Model - Limited Edition - A New Hope
The Imperial TIE (Twin Ion Engine) Fighter is one of many iconic symbols of the evil Galactic Empire. TIE Fighters are single-pilot starfighters and at only 8.99 meters long, they were designed for the fast paced dogfights with the Rebellion's X-Wing starfighters. The short ranged TIE Fighters were stationed on Star Destroyers and the Empire's ultimate symbol of oppression, the Death Star, so that they can be easily deployed throughout the galaxy.

The Standard TIE Fighter was the basis for other variants of the TIE series of starfighters including Darth Vader's TIE, also seen in A New Hope, the TIE Bomber in The Empire Strikes Back and the TIE Interceptor seen in Return of the Jedi.
Product Packaging

Text and Photography by Chris Wyman