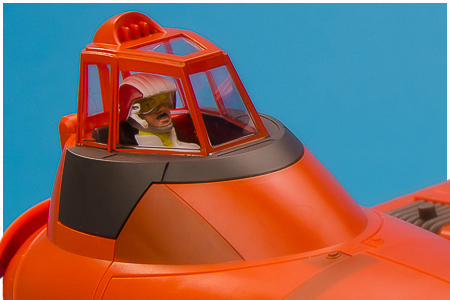 The Empire Strikes Back
At the point The Vintage Collection 2010 VC11 (Twin Pod) Cloud Car Pilot was released, there have only been four figures released of this character, and all four have had to take liberties in their design since all that ever physically existed were a couple of carved heads in the models ILM used to film the scenes on Bespin in The Empire Strikes Back. Of all four figures, the VC11 (Twin Pod) Cloud Car Pilot is arguably the most authentic, as it was based on the design art for the film.

Hasbro revealed four of the figures in the first wave of The Vintage Collection at the UK Toy Fair in January 2010, but the first wave, which also included new figures based on Dengar, Leia (Hoth Outfit), Han Solo (Echo Base Outfit), Luke Skywalker (Bespin Fatigues), the generic and very Kenner-esque AT-AT Commander, C-3PO (See-Threepio) with removable panels, the first ever single carded Dack Ralter and Darth Vader along with repacked 4-LOM and Boba Fett figures; wasn't fully revealed until the International Toy Fair the following month. This assortment began showing up in July 2010.