It's OUR anniversary and YOU get the presents! 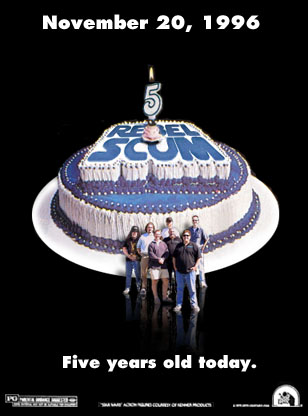 Rebelscum celebrated five years of publishing Star Wars collecting news on November 20, 2001. While the page was around before the first news was posted, it's really the news that filled, and continues to fill collectors' needs. On November 20, 2001 we had one heck of a Rebelscum giveaway drawing!

Back then the site was a solo operation run by Philip Wise and was known as "Philip's Star Wars Pictures, Toys and Thoughts". Quite a bit has changed since those early days - the site has been redesigned, renamed, and now has a staff of seven dedicated Star Wars enthusiasts.

Between Adam Pawlus and Mark Hurray, they answered over 1,500 collector questions in our Q&A column and our polls have had over 175,000 votes tallied on 101 topics since the beginning. Rebelscum's support of the customizing community continues with the Customs Listserver in operation even since before this anniversary, October of 1996. It spawned the popular customs website FFURG.com and we are nearly to 150 weekly Custom Figure Critiques, never missing a week since we started almost three years ago. And finally, the collector's Collect To Collect Code Of Honor is proudly displayed and linked on countless collecting websites, helping to educate people on exactly what a scalper is.

Besides all this, one thing has remained fairly constant, however, and that would be our giveaways, of which there have been well over 200 winners since our first on January 31, 1999.

Who remembers the live webcast of the Theater Edition Jedi Luke contest? How about the "Win It Before You Can Buy It" Episode One Battle Droid giveaway? Over the course of the years Rebelscum has handed out tons of Star Wars loot, some of it nearly impossible to get, including complete sets of Special Edition movie passes, limited-edition LEGO Star Wars bricks, countless Bo'Marr Monks and Muftak/Kabe two-packs, Wal-Mart POTF figure posters, and more recently the popular Ultarama Display Systems.

In honor (honour) of our anniversary we decided to hold a Anniversary Giveaway Bonanza! Thanks to our Anniversary Celebration Sponsors, and Rebelscum Staff, we got more cool prizes than you can shake a gaffi stick at - and rather than simply handing them out at random, we drew names to determine a picking order. That's right, the first name drawn got to pick first from a veritable treasure chest of loot! You can always count on us to do something a little different... The name drawn second got second pick, third got third pick, and so on until we reached the bottom of the cargo hold!

So, what is included in this Anniversary Giveaway Bonanza? Check it out:

Two LEGO Blockade Runners
With more than 1,700 pieces, this giant Corellian Corvette model is so detailed and realistic youll be ready to launch your own covert mission against the Empire! (Two ships, one ship per winner)
Sponsor: LEGO

Official Tataouine Tours Guidebook
Don't leave home without this terrific guidebook! Perfect for use in the field, or just quiet reading at home.
Sponsor: Tataouine Tours

2 Boxes Jabba's Palace Expansion for Star Wars CCG
Jabba's Sail Barge, the Rancor, the Sarlacc Pit, Bib Fortuna and a host of aliens will enter into the game in this expansion. (Two boxes, one box per winner)
Sponsor: Decipher

2 Boxes Reflections Expansion for Star Wars CCG
Each pack contains a new foil card - either a rare card not foiled in previous expansion sets, or a special preview of a rare card from the Boonta Eve Podrace expansion. (Two boxes, one box per winner)
Sponsor: Decipher

2 Boxes Tatooine Expansion for Star Wars CCG
Tatooine introduces material from Episode I: The Phantom Menace into the galaxy of Star Wars CCG for the first time! (Two boxes, one box per winner)
Sponsor: Decipher

Box of Jedi Council Expansion
This expansion set acts as an additional toolbox for experienced players and an entry point for newcomers, as the focus of the action shifts to Coruscant, Jedi Council, and the Galactic Senate.
Sponsor: Decipher

Box of Battle of Naboo Expansion
Can you hear the powerful rumbling of battle tanks, the buzzing of energy weapons charging up, the echoes of Gungan attack cries? Theres a battle coming...
Sponsor: Decipher

Box of Duel of the Fates Expansion
This expansion set introduces completely revised starship battle rules, as well as new mechanics for lightsaber dueling ... a dangerous but effective way to deal with Force-attuned opponents.
Sponsor: Decipher

Box of Boonta Eve Podrace Expansion
This expansion set adds tremendous gameplay to the Episode I environment, offering fans the excitement and exhilaration of Podracing scenes that made Star Wars: Episode I so memorable.
Sponsor: Decipher

Box of Scum and Villainy Expansion
Featuring stunning 3-D computer modeled imagery and compelling gameplay based on the classic Star Wars trilogy- choose to play as the Alliance, the Empire, or the Independent scum and villainy of the galaxy.
Sponsor: Decipher

TIE Interceptor
The TIE Interceptor, as seen in Return of the Jedi swarming off the Rebel Fleet's attack on the new Death Star, features exploding wing action and a TIE pilot figure!
Sponsor: Planet Action Figure

Legends in 3D Emperor Palpatine Bust
Hand painted and made from cold-cast porcelain, this cool 9" tall bust is sculpted by Greg Aronowitz and makes for a very impressive display piece.
Sponsor: M and M Collectibles

Rebelscum T-Shirt
Throw away all your other shirts - this is the only item of clothing you'll ever need. Perfect attire for every occasion!
Sponsor: Rebelscum

Rebelscum.com Hat
Be the envy of all your friends with this official Rebelscum head gear!
Sponsor: Rebelscum

Wal-Mart POTF2 Action Figure Poster
Featuring a visual checklist of POTF2 action figures, these Wal-Mart mail-away posters were an instant hit among collectors and are mighty hard to come by these days...
Sponsor: Rebelscum

Ten Sets Wal-Mart Episode 1 DVD Preview cards
Each set contains all four cards that were handed out around the time of the Episode 1 DVD release. The cards could be scanned at preview kiosks where clips of the DVD would play. (Ten sets, one set per winner)
Sponsor: Rebelscum

Three TIE Interceptors
The TIE Interceptor, as seen in Return of the Jedi swarming off the Rebel Fleet's attack on the new Death Star, features exploding wing action and a TIE pilot figure! (Three ships, one ship per winner)
Sponsor: Rebelscum

Bespin Guard
Where would Lando be without his mighty Bespin Guards? And who doesn't love troop builders?
Sponsor: Rebelscum

Jawa Force Original Artwork
Your chance to own a piece of the Internet's first online comic!
Sponsor: Jawa Force

LEGO TIE Fighter
One of the most feared sights in the Empire is a TIE fighter coming up behind you! Especially this onewith the first ever LEGO stormtrooper!
Sponsor: LEGO

Two LEGO A-Wing Fighters
Fearless Rebel pilots zoom through the skies in the speedy A-wing. It has two wing-mounted pivoting blaster cannons, and a cockpit that opens and closes. Comes with one Rebel pilot and a mechanic. (Two sets, one set per winner)
Sponsor: LEGO

Two LEGO Technic Stormtroopers
He stops, looks, aims and fires  all at your command! Working parts allow you to control the stormtrooper's arms by a wheel in the back. (Two sets, one set per winner)
Sponsor: LEGO

Two LEGO Technic C-3PO Sets
Build your own C-3PO, just like Anakin does! And like the C-3PO from Star Wars, this one has real moving parts. (Two sets, one set per winner)
Sponsor: LEGO

Boba Fett - Jeremy Bulloch Autograph
Own the autograph belonging to the most feared bounty hunter in the galaxy!
Sponsor: Mr. Jeremy Bulloch

Deluxe Bacta Tank Luke
One of the most highly anticipated Star Wars Power of the Jedi offerings ever is the deluxe Luke Skywalker in Bacta Chamber. Features include a tube you can blow into, creating Bacta bubbles galore!
Sponsor: AisleSniper.com

That's 117 anniversary presents! For two weeks we accepted daily enteries into the contest - the more folks entered, the better their odds of winning. Then, on the evening of November 20th, we drew names and listed them, as they were drawn, right here. A Winner's Circle Chat was held in the Rebelchat area with all the names on that list will determine who will receive what. A thanks to everyone who entered - even if you didn't win, you can still look forward to many more great give-aways over the course of the next five years!