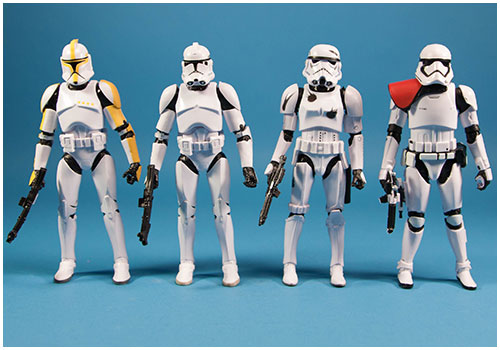 PHASE I CLONE TROOPER COMMANDER: Created in secret by Kaminoan cloners, the first Clone Troopers were deployed to protect the Jedi during the battle of Geonosis

IMPERIAL STORMTROOPER: Under the tyrannical rule of the Empire, Stormtrooper legions ruthlessly crushed resistance across the galaxy.

FIRST ORDER STORMTROOPER OFFICER: Equipped with sleek armor and powerful weapons, the Stormtroopers enforce the will of the First Order.

This army builder set was revealed on September 4th 2015, aka Force Friday, and is essentially a 6-inch version of the Clone Trooper to Stormtrooper Evolutions set that was released as part of the Revenge of the Sith line in 2005, expanded to accommodate a Stormtrooper from the First Order. The set began shipping in early November, nearly a month sooner than originally estimated.

« Back To The Black Series 6-Inch Exclusives