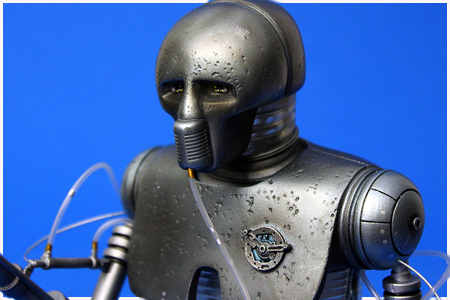 2010 Premier Guild Members Exclusive Mini Bust
2-1B (Too-Onebee) was chief surgeon for the Rebel Alliance on Hoths Echo Base. This highly-skilled surgical droid has treated a variety of injuries and patients, most notably Luke Skywalker. Attending to the young commander on several occasions, 2-1B revived Luke from a state of dormo-shock after a prolonged exposure to the Hoth elements. After Lukes confrontation with Darth Vader on Bespin, 2-1B affixed Luke with a cybernetic hand.

Gentle Giants 2-1B mini bust, with its limited production run of only 1,980 pieces to commemorate the 30th anniversary of The Empire Strikes Back, was originally intended to be a Star Wars Celebration V (Orlando 2010) exclusive, but production delays pushed it past the maximum shipping date. Rolling with the punches, Gentle Giant offered this light-up collectible to their Premier Guild Members.