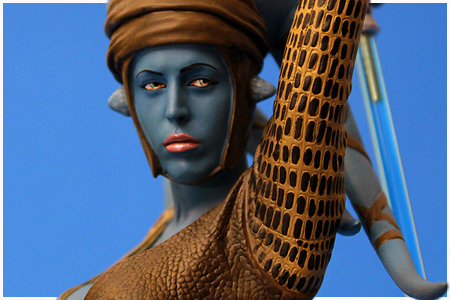 Collectible Mini Bust
Like her fellow Jedi, Aayla Secura become a general during the Clone Wars. During the Outer Rim Sieges, she was station on the colorful world of Felucia. As General Secura approached the opposing Separatist forces, Chancellor Palpatine activated Order 66, and contacted Aaylas clone officer, Commander Bly, via hologram. The executive command identified the Jedi as traitors to the Republic. Bly loyally carried out the order, raising his blaster rifle against his Jedi general.

When released in 2008, the Aayla Secura mini bust was only the sixth female bust in Gentle Giants Star Wars collection. It features a removable Lightsaber blade, which allows the collector to display the bust with or without the lit Jedi weapon.