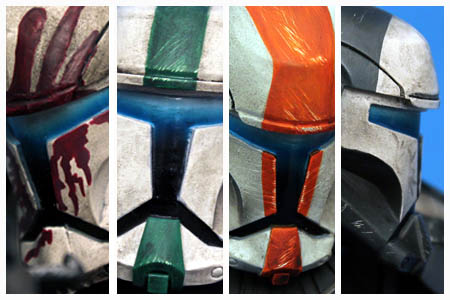 Collectible Mini Busts
Equipped with specialized weaponry like the DC-17m rifle, special tactical visors, and Katarn-class body armor, the Republic commandos can infiltrate the deepest, darkest reaches of the Separatist strongholds. The Clone Wars were won or lost, more often than not, due to the efforts of small, annoymous squads of Republic commandos, working behind the scenes and deep behind ememy lines to do what larger armies could not. These highly-detailed mini busts, based on the original Lucasfilm costumes and props, where sculpted and painted by Gentle Giant Ltd.

Each one of these Mini-Busts was also available seperately as an exclusive and each had a run of 1,300 pieces in addition to the 200 available through this special Limited Edition Collectors Set.