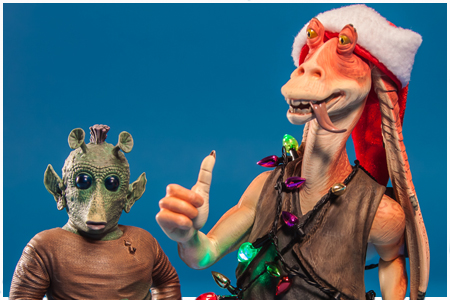 2012 Premier Guild Exclusive Holiday Deluxe Mini Bust Set
For years, Star Wars fans have been asking for Jar Jar Binks in Mini Bust form and for years, its been a huge hole in many collections. Now, the wait is over! Love him or hate him, hes in integral part of the Prequels and no Episode I shelf would be complete without him. Gentle Giant excels at making CGI and helmeted characters above all else and this piece is no exception. With the optional addition of a Santa hat and lights, he also makes the perfect Christmas decoration. W. Wald gets some love too and comes packed in with Jar Jar making this quite the formidable Episode I Deluxe 2-pack..
Product Packaging