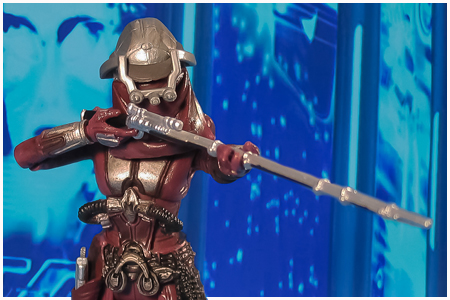 Attack Of The Clones
The VC30 Zam Wesell action figure from the fourth wave of The Vintage Collection is the absolute definitive version of the Attack Of The Clones bounty hunter. Not only did this figure feature super articulation that is perfectly balanced with a screen accurate silhouette, it came packed with everything you'd want including both a drawn and open switch out veils, a removable helmet with articulated binoculars, a removable Mabari Armorweave Kama with functional holster, an arguably removable right forearm, a KYD-21 blaster and a KiSteer 1284 projectile rifle. Sure, you don't get the crazy assassin centipede dudes*, but since they weren't technically hers, we aren't complaining.

The fourth wave of action figures in The Vintage Collection focused on the characters and costumes featured in Star Wars Episode II: Attack Of The Clones. The assortment which also included the all new VC29 Kit Fisto, the repacked VC31 Obi-Wan Kenobi, the much-needed updated VC32 Anakin Skywalker (Peasant Disguise), the debut VC33 Padmé Amidala (Peasant Disguise), the slightly retooled definitive VC34 Jango Fett, the retooled VC35 Mace Windu, the kit-bashed VC36 Senate Guard and the repainted VC37 Super Battle Droid was the first to be released without a special send away offer form or sticker. Of all the figures in this wave, only the VC31 Obi-Wan and VC34 Jango figures were repacked in future assortments, and as such only these two figures can be found with send away offers.
U.S. Product Packaging
North American Tri-Logo Product Packaging