Use the force to find and rescue Princess Leia from the Death Star. The battle against the dark side returns to mobile!

With a comical take on the Star Wars Trilogy that revolutionized pop culture forever, LEGO Star Wars II includes even more of the family-friendly LEGO action, puzzles and humour that earned the original LEGO Star Wars such popularity and acclaim. 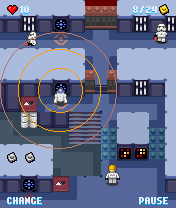