LEGO: Fan Takes UCS Falcon To New Heights
Posted by Jeremy on June 24, 2019 at 05:48 PM CST
First reported by Beyond The Brick, via their Twitter feed, is this stupendously super-sized modification of the UCS Millennium Falcon which creates the impression that the model is making the jump to lightspeed. 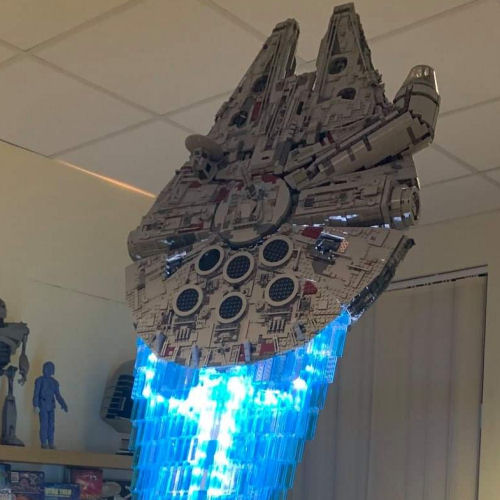 Measuring an estimated 2.2 metres high, the construction is comprised of a light-weight metal support attached to a custom-made internal structure which holds the lighting kit and hides the wiring. The contrail, for want of a better word, is made up of transparent elements - largely 1x2x6 bricks which disguise the supporting metalwork and help to diffuse the light. We can only assume that the green base plate is a temporary measure to hide the horizontal platform.

Diligent observers - whether LEGO or Star Wars - will notice some interesting items on the shelves in the background. and readers interested in this biggest LEGO set ever - 75192 Millennium Falcon - should head to LEGO's online and retail stores, where it is still available, priced $799.99.
SEND