LEGO The Rise Of Skywalker: Create Your Own Saga
Posted by Jeremy on February 11, 2020 at 07:27 PM CST
For the millions of LEGO fans around the world the release of a new Star Wars movie means new sets but, inevitably, its not always possible for LEGO to capture every new environment, vehicle or character.

Thankfully because of the community that LEGO has fostered theres an almost unlimited pool of talented creators to step forward to fill in the gap. And step in they did! Almost from the second that the first teaser was released at Star Wars Celebration 2019 in Chicago, builders started to dig through their spare LEGO bricks to assemble their own visions. Not knowing the full scope of the movie they improvised and employed their own imagination and interpretations to help complete the telling of the final chapter of the Saga. 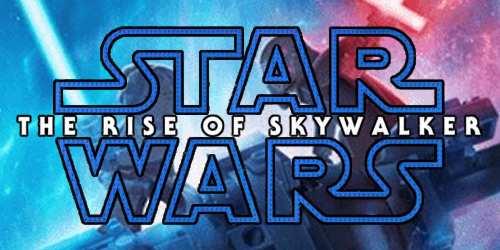 The shocking announcement that Emperor Palpatine is alive(!) turns everything upside down for the First Orders Supreme Leader, who immediately sets off on a campaign to fortify his power over the galaxy.

On the hunt for a vital clue that will lead him to the most significant threat to his authority - the Emperor Risen - Kylo Rens search takes him to the ruins of Darth Vaders castle on Mustafar where a Sith wayfinder is said to be hidden. With the rest of the Knights of Ren at his side he slashes his way to the secure the lost Sith artefact. With it plugged into his TIE's navicomp the Supreme Leader of the First Order follows the path to a lost Sith world where the original phantom menace reveals himself, his new fleet and his plans for domination. 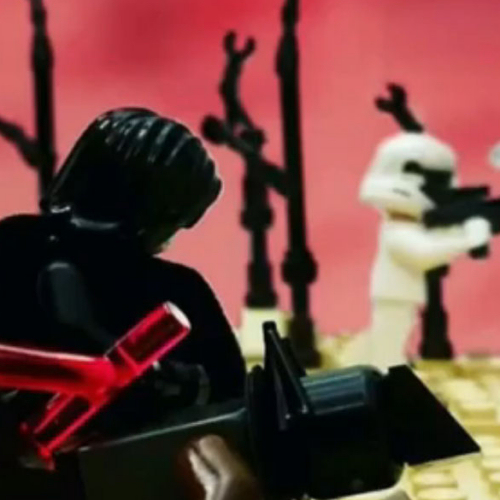 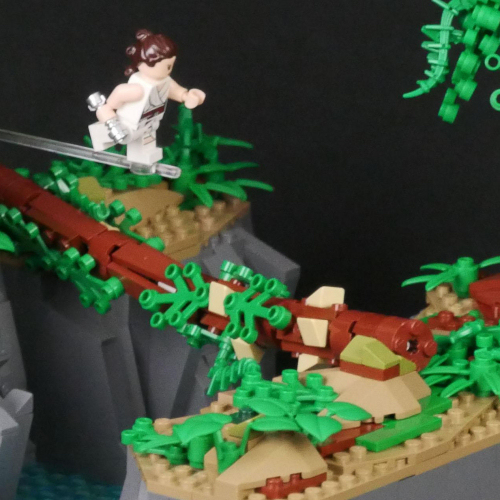 On board the Millennium Falcon the Resistance rushes to rendezvous with Boolio, a sympathiser with vital information for General Organa and then on to the Resistances new hideout on Ajan Kloss where, as a counterpoint to the frenetic pace that has been set so far, Rey demonstrates serenity, grace and poise as she undergoes her extended Jedi training.

This lush world provides plenty of hazards and tests of skills that would make for a great playset - swings, levitating boulders, target drones and a new Leia minifigure to accompany Rey in her Jedi training garb.

The discovery that the Resistance has a mole in the First Order leads to the realisation that Palpatine is alive and well, and plans are made to stop him. A scrap of well-remembered information points the Resistance to Pasaana - and it is here that Leia puts all her eggs in one basket and sends her best to find the next clue on Pasaana.

Arriving in the middle of a celebration, the team of Resistance heroes soon find themselves in the company of Lando Calrissian, whose timely arrival saves the heroes from local First Order troops. Once the danger has passed they hotwire a pair of skiffs and head off into the desert, pursued - again - by the First Order, who have arrived in greater force. 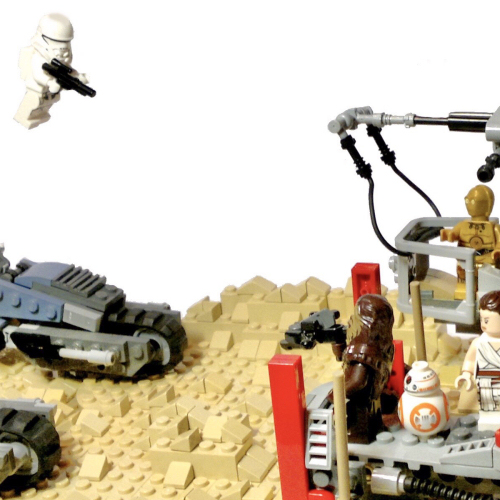 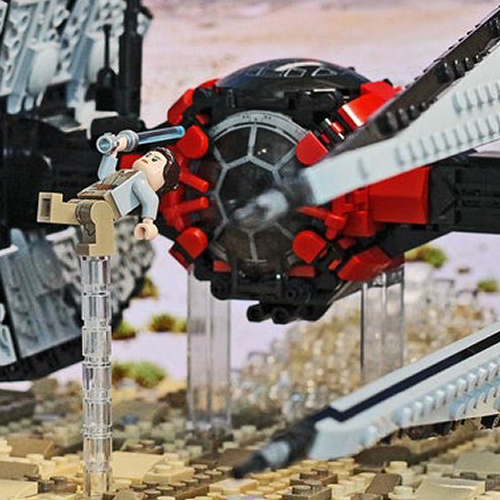 Lead by Kylo Ren, flying his latest modified TIE Interceptor - the TIE Whisperer - he faces off with Rey while his troops harass Poe, Finn and the droids. During the duel in the desert Rey, in a display of her Force powers, destroys the First Order troop dropship that Chewbacca in chains has been led into.

During a respite in hostilities the heroes of the Resistance makeoff in the Bestoon Legacy, the abandoned ship owned an assasin who had been not only tracking Rey but had hunted down the Sith artefact that the Resistance needed to move on to the next stage of their adventure. As well as finding the Sith dagger on board they discover the jittery droid D-O. 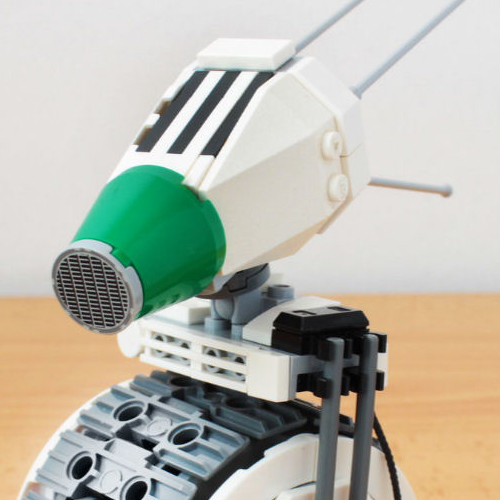 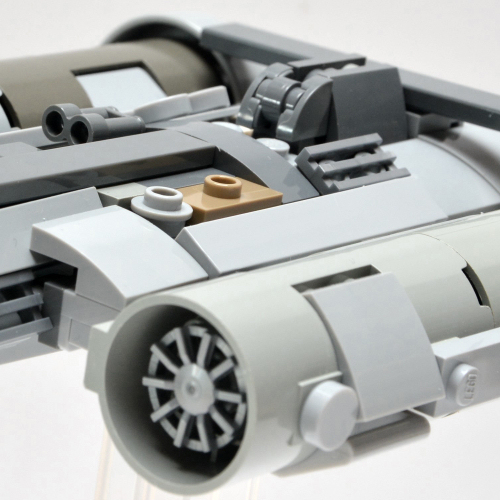 Making their escape the Resistance party heads to the occupied world of Kijimi in the next stage of their quest. Their arrival coincides with a First Order curfew and lockdown, forcing the Resistance party to tap into underworld resources in order to find the legendary droidsmith Babu Frik. 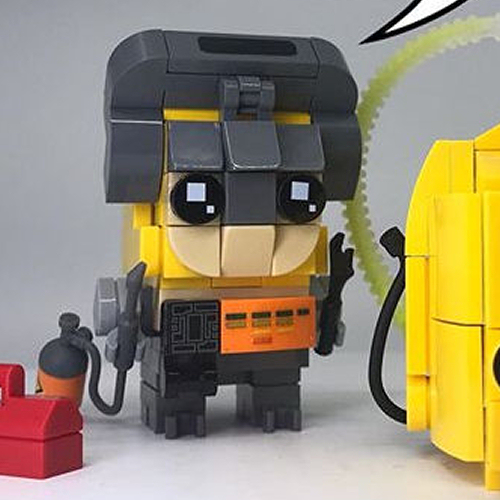 With the necessary clue to the next stage of their mission secured the gang heads to the ocean moon of Endor, but not before sneaking onboard a First Order and antagonising Kylo Ren. After a rough landing on Kef Bir they find - much like on Reys homeworld of Jakku - significant sections of detritus from an older war" adorning the surface. 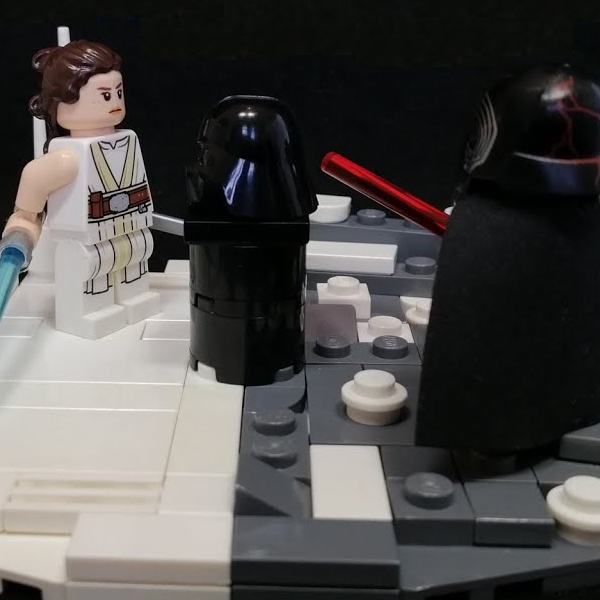 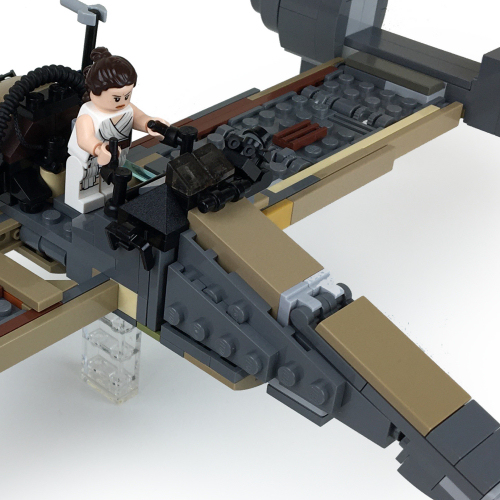 Taking a sea skiff, Rey crosses the monstrous waves to reach the wreckage of the second Death Star where the last remaining Sith navigation beacon rests. Hidden in a chamber that adjoins Emperor Palpatines throne room, Rey duels a Dark Side projection of herself and then faces off against a more corporeal Kylo Ren. 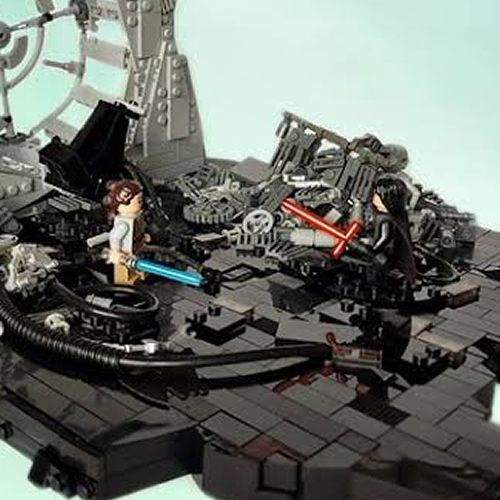 Mortified with the truth about her lineage and her close brush with the Dark Side, Rey flees to the same isolated outcrop on Ahch-To that Luke Skywalker hid himself away on. With the TIE Whisperer and Sith wayfinder that she liberated from Kylo ablaze she faces a life of solitude. Until, that is, her old Master steps out of the flames and convinces his would-be apprentice that the path he took isnt the one for her. Reys reward is Red 5, which Luke raises from its watery grave, allowing Rey to carry on with her mission to face her grandfather.

Back on Ajan Kloss, at the temporary base of the Resistance, the Resistance fleet faces the fact that they have to confront both the First Order and Palpatine's new Final Order and so the rag-tag assemblage of whatever capital craft and starfighters the Resistance has been able to beg, borrow and steal heads off to Exegol with the flight data transmitted by Rey.

Having reached Exegol ahead of her compatriots, Rey heads deep into the Sith Eternals fortress - passing a number of gruesome cloning tanks. Squaring up to her grandfather and, hanging from his umbilical, her comrades in arms go toe-to-toe with the Sith fleet high above. 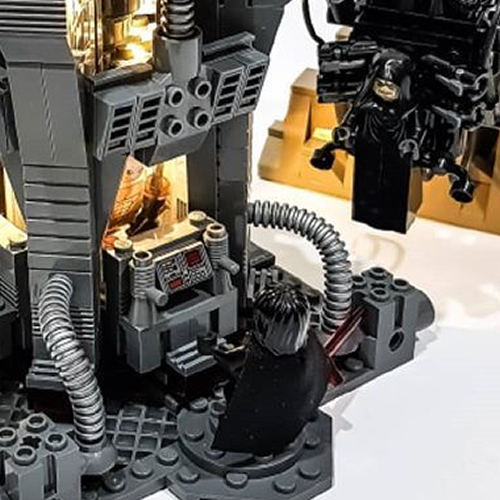 Now redeemed as Ben Solo, the Supreme-Leader-that-was turns scavenger and finds a serviceable TIE Fighter in the wave-soaked wreckage of the Death Star and navigates the Unknown Regions and safely passes through the battle raging in the skies above Exegol, Ben races to catch up with Rey to be by her side. His entrance doesnt go as planned, however, and he is waylaid by the dark warriors he used to run with. 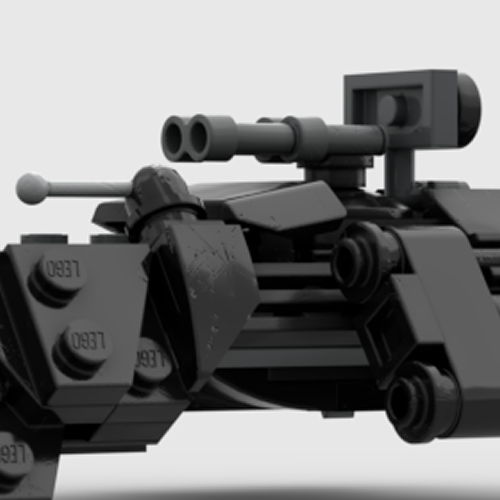 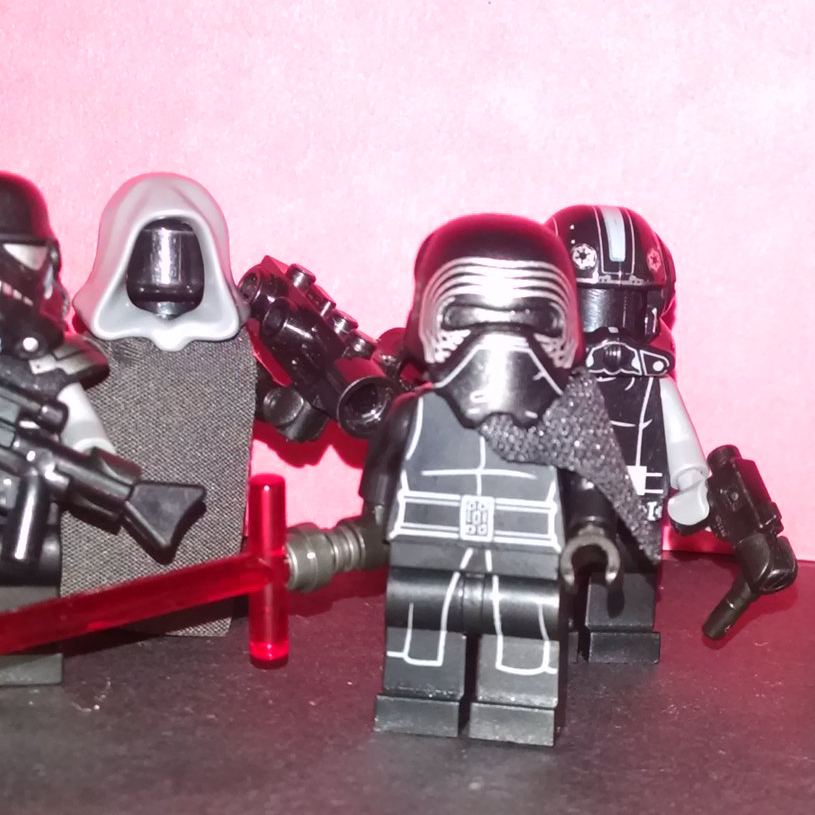 High above the planets surface the Resistances two-pronged assault on the Final Order has begun, with the out-numbered fleet doing their best to provide cover for the ground invasion who are now adapting to riding their four-legged steeds across a First Order Star Destroyer hull. Dropped off on the deck of the First Orders command ship the Resistance assault team do their best to prevent the Sith fleet of planet-killing Star Destroyers from breaking atmosphere. 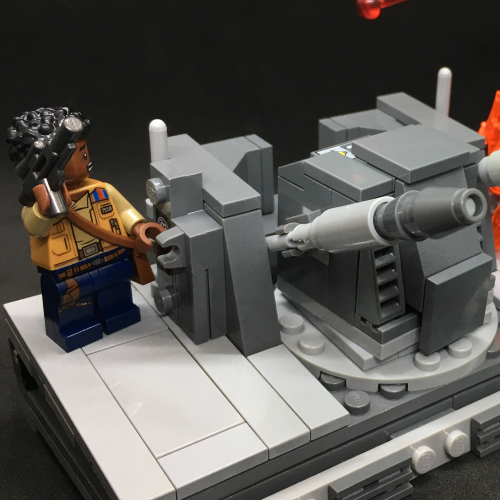 Far below on the surface of Exegol, Rey turns down the Emperors offer of an immortal throne and the Sith hits the fan with the full weight of the Sith Eternal being thrown at the last Palpatine and her one-man entourage, Ben Solo. Under the combined onslaught of the elite Sith troopers and arcane Sith magic, Rey collapses to the ground, beaten and defeated while Ben gets cast into a chasm.

With the arrival of Lando and his panoply of spaceships and starfighters from the length and breadth of the galaxy youd expect that there would be quite a few set possibilities, but apart from a few flying Easter Eggs there isnt much detail and picking out individual participants is difficult.

Rey sees that the atmo battle isnt going well and pulls herself together for one final stand of defiance that ends Palpatines plans. The day - and the galaxy - is saved! 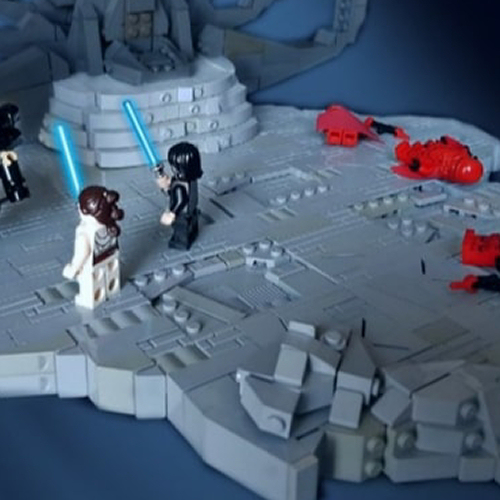 While Rey pays quiet homage to her Masters by burying the last artifacts of the Jedi Order 2.0, all that remains is to tour the galaxy to witness the celebrations as world after world realises that the Skywalker Saga is over.


Regardless of what you see on the big screen when you watch The Rise of Skywalker, remember that, just like those builders who made all the examples shown in this article, when you look at a pile of LEGO bricks you are actually looking at possibility.

Do you feel inspired by these creations and want to start making your own custom LEGO sets - or maybe you already have a few of your own? Head over to the LEGO Star Wars customising section of our forums and see where it takes you.
SEND