The Art of (LEGO) Star Wars: Brotherhood Workshop
Posted by Jeremy on May 24, 2020 at 12:34 AM CST
When it comes to LEGO stop-motion movies Brotherhood Workshop is the force to be reckoned with; if you haven't already checked out the Youtube channel you've probably come across the work they did for LEGO during its Greatest Battles Are Built By You series of child-inspired short movies that ran through 2019.

For the most part Brotherhood Workshop is Kevin Ulrich, a storyteller and miniscale movie maker who has made it big. At the age of five Kevin was drawing story-driven sketches, at age eight he was writing short novels, and by 10 he was writing, recording and producing his own Star Wars radio dramas. His move into LEGO movies came in 2000 when he discovered 1349 Studios Steven Spielberg MovieMaker set. After saving up the necessary $180 his father offered him a hand-held video camera instead, and from there - armed with a computer, tape recorder, a pen and a notepad - he taught himself the art of LEGO stop-motion movie-making.

His amateur animatics continued through middle and high school, and inspired him to study film production at university. After graduating he picked up work as a freelance animator, video editor, writer and director at DreamWorks, NBC, WETA Digital, Lucasfilm, and Disney.

Tactically situated somewhere between the Lars Family Homestead and Bag End, Kevin works from his home studio - which, he admits, sounds a lot grander than spare bedroom. Splitting his time as a freelance animator and a semi-professional YouTuber, Kevin has set himself up as one of the premiere LEGO stop-motion animators. 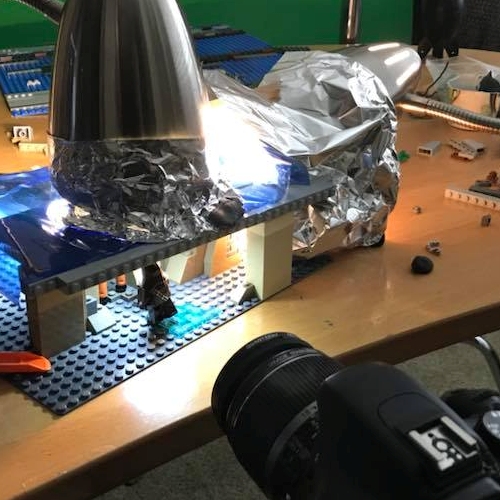 Taking time away from his work, Kevin spoke to Rebelscum about his self-made movies and to debate which trilogy is better.

RS: Who is Brotherhood Workshop? How many people do you work with?

KU: At this point, it's mostly just me. I will occasionally work with a handful of others when a task involves a skill set I don't have (certain VFX, graphic design original music, specific LEGO builds), and my wife Celina often helps with the writing. But the bulk of it is just me in my home studio.

RS: Can you give us a brief explanation of your process - or is it impossible to condense?

KU: It depends on whether I'm creating a video for myself or for a client.

If I'm making a video for myself, inspiration comes from various places, such as watching a movie, having a conversation, or just by juxtaposing a few objects (often LEGO) together that suddenly spark my imagination. When that happens, I will mull over the idea for a few days, playing it out in my head, and essentially creating the video in my mind before I ever start to animate. Once that is done, I gather the necessary elements, sit down, and crank it out.

When making a video for a client, they often will come to me with an idea and ask me to flesh it out. I usually go to my wife, and the two of us will brainstorm 10 or more options and then let the client pick one. We then turn the idea into a full script. Once that is approved, I build the environments and create a storyboard taking photos of the sets and characters. This helps me to think through the project ahead of time and deal with any problems before animation actually begins. Once the storyboard is approved, I start animating. 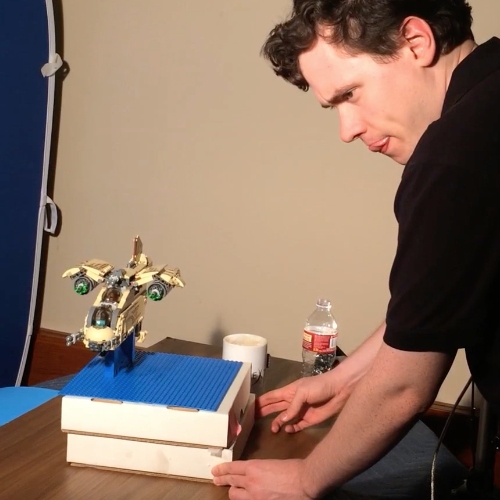 Going into further detail, Kevin explains that 60 hours of animating equates to one minute of finished footage - this doesn't include the effort that he puts into pre-production, set design, or post-production either - and typically the time taken to make a 60 second video can range between 16 and 200 hours!

Asked what advice he had to share with people wanting to try their hand at making LEGO stop-motion movies, Kevin's stand out piece of advice was not to expect to be great on your first try. Secondly, just get on with it and don't wait until you have all of the "right" tools before you start.

"When I started all I had was a handycam, a tape recorder, and some LEGO bricks. I wasn't even able to digitize and edit my footage on a computer until I had been animating for over 3 years. Focus on what you CAN do, not what you CAN'T do. It's the only way to move forward, both as an animator and in life as a whole."

RS: Given the time and effort it goes into creating these movies it's a wonder you have time for anything else. How do you find the energy?

KU: I have found it to be a matter of momentum. If I'm in the habit of working crazy hours, it's much easier to keep going than if I slow down and try to start again. When I first started my channel in 2012, I was working a full-time job as a video editor, and I would animate on nights and weekends. This went on for nearly three years until in 2015 I had enough income from client work that I was able to quit my day job and focus on animation full time. I still work a lot of hours when I need to hit deadlines, but it's easy to work hard when you love what you do. 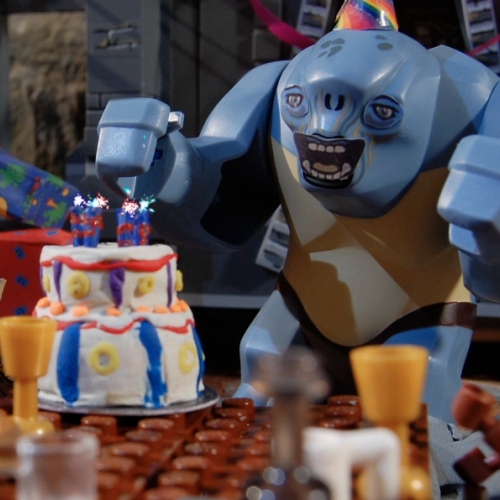 Having walked neatly into our trap we tackled the burning issue of the balance of Star Wars and Lord of the Rings movies in his Youtube channel because, of the more than 100 movies he has made, only ten of them are from a galaxy far, far away.

RS: So, Tolkien's trilogy vs Lucas's - which is your favourite?

KU: Tolkien all the way. I LOVE LOVE LOVE Star Wars, but I emotionally resonate with Tolkien on a much deeper level. It's fun to go on adventures in a Galaxy Far Far Away, but Middle Earth feels like home.

And it was his love of Hobbits, elves, dwarves and long walks after unexpected parties that caught the eye of LEGO.

"They first noticed me in 2013 because of the Lord of the Rings content I was posting on my YouTube channel. They reached out and asked me to produce a couple of shorts for their "Hobbit" line of sets. Then in 2014, I won a brickfilming contest for "The LEGO Movie" which gave me much more attention. I was able to develop a relationship with several departments at the LEGO Group, and I've been doing jobs for them off and on ever since."

Recognising that most of his movies are somewhat irreverent he doesn't worry that he is going to rise the ire of the fans he is trying to entertain. Instead of making fun of the movie itself he takes moments from the film and plays them out differently - and with a touch of comedy

"I've never been worried about going too far because I've never felt like my videos were mocking Star Wars, but rather playful love letters." he explained.

A perfect example of this is Chirrut vs. Everything, created for How It Should Have Ended, which Kevin says is his favourite Star Wars brickfilm. He explains that even though it doesn't have the best lighting or set design,"man is it fun to watch". Check it out below and try not to laugh!


As well as working for Lucasfilm to promote Rogue One and How To Train Your Dragon for DreamWorks, Kevin also contributed his animation skills towards a unique publicity campaign that replaced an entire segment of TV commercials with brick-motion facsimiles.

It's his work with LEGO that he is fondest of, and has immersed him in such franchises as DC Super Heroes, Jurassic World, Star Wars, The Hobbit, Marvel Super Heroes, Speed Champions, The LEGO Movie, Ninjago and LEGO Batman.

RS: Without breaking any NDA's, what is it like to work with LEGO?

KU: It's been awesome, and the longer I work with them the better it gets. At first, there was a bit of a learning curve, trying to understand how best to represent their brand and what aspects of my work resonated with their ethos. But the longer I work with them, the more I understand what they are wanting from each video. I just miss working on Middle Earth videos, and I hope they do a new castle theme soon!

RS: Many artists who work in the medium of LEGO dream of working for LEGO. You've achieved that - what's next?

KU: Just about every good thing that has happened in my life came as a surprise. When I first started making YouTube videos, I was trying to court the attention of Peter Jackson and crew. So when LEGO reached out to me, it was a complete change of course. Rightly or wrongly, life has taught me to focus on using each day to the fullest instead of focusing on a distant dream that might never happen. I'm pretty happy with my life as it is, but I have my eyes opened for when the next surprise opportunity comes knocking.

Being mindful of how much time and effort Kevin puts into his animations - and answering interviews from fans - we wanted to know how he spends his rare moments of free time. His answer was, sadly for these times of coronavirus confinement, a list of places and activities that involve socialising, exercise and travel. Hopefully he is able to find an alternate means of channeling his energy - no-one wants you to burn out Kevin!

On a final note, Kevin recommends checking out Dylan Woodley and Forrestfire101 for the kind of jaw-droppingly awesome animation that he hopes Brotherhood Workshop will one day achieve.
SEND