LEGO UCS Republic Gunship Updatoid
Posted by Jeremy on May 30, 2020 at 12:35 AM CST
With the annual Fan Days - normally a physical get together of LEGO blogsites from around the world but this year occurring online due to limitations on travel and social gathering - taking place at the moment there's a whole raft of LEGO news coming out, but sadly LEGO Star Wars doesn't feature very highly. Lucky for us Brick Fanatics was able to get a couple of questions concerning the progress of the Ultimate Collector Series Republic Gunship, which was revealed through LEGO Ideas following a recent fan poll, answered by LEGO lead designers Jens Kronvold Frederiksen and Michael Lee Stockwell:

Development on LEGO Ideas sets often starts before the set is approved. Was any development done on the Republic Gunship before it won?

Jens: To be quite honest we didnt have anything before the poll, we had done a little bit of thinking on the Nebulon-B and also on the TIE Bomber  but that was more coincidence. I would say the Nebulon was more to be sure we could deliver it, because of the structure. We were very much in doubt if it was at all possible to make at that size, so we were experimenting a little bit. But with the Gunship, we were sure we could do it and we hadnt started any work.

Michael: We are knee-deep in development now. Were hard at work, definitely.

It is interesting to read that some development work has been done on the other two options and based on a recent conversation between Rebelscum and Jens Kronvold Frederiksen the primary area of concern in the design of the Rebel medical frigate (Nebulon-B), seen at the end of The Empire Strikes Back, was the connecting structure between the forward and aft sections. Jens was able to reveal that once the LEGO Star Wars team had overcome problems ensuring the connections were strong enough they would continue to develop this model.

This information pre-dates the LEGO Ideas poll, which attracted more than 40,000 votes - the single largest Star Wars set ballot conducted by LEGO - that ran in January 2020. 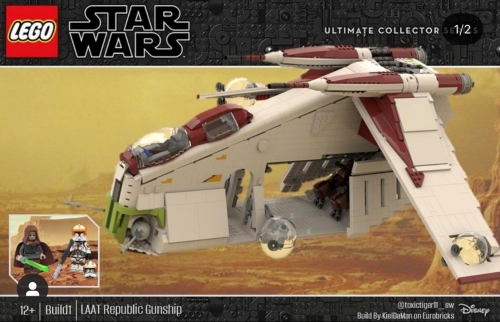 When probed for a release date Jens explained "Our development side takes time at LEGO, so we hope that people will just be a little bit patient. It is going to happen, but we cant mention the launch date yet."

While an official release date hasn't been announced, Rebelscum has been tipped off that this new Ultimate Collector Series set is likely to be made available in 2021. Standard scheduling procedure for direct-to-consumer (i.e. LEGO online/branded stores exclusives) UCS sets is typically April/May and September/October so you either have eleven or seventeen months to decide where you will display it.

Head over to Brick Fanatics where you can checkout the rest of the interview.
SEND