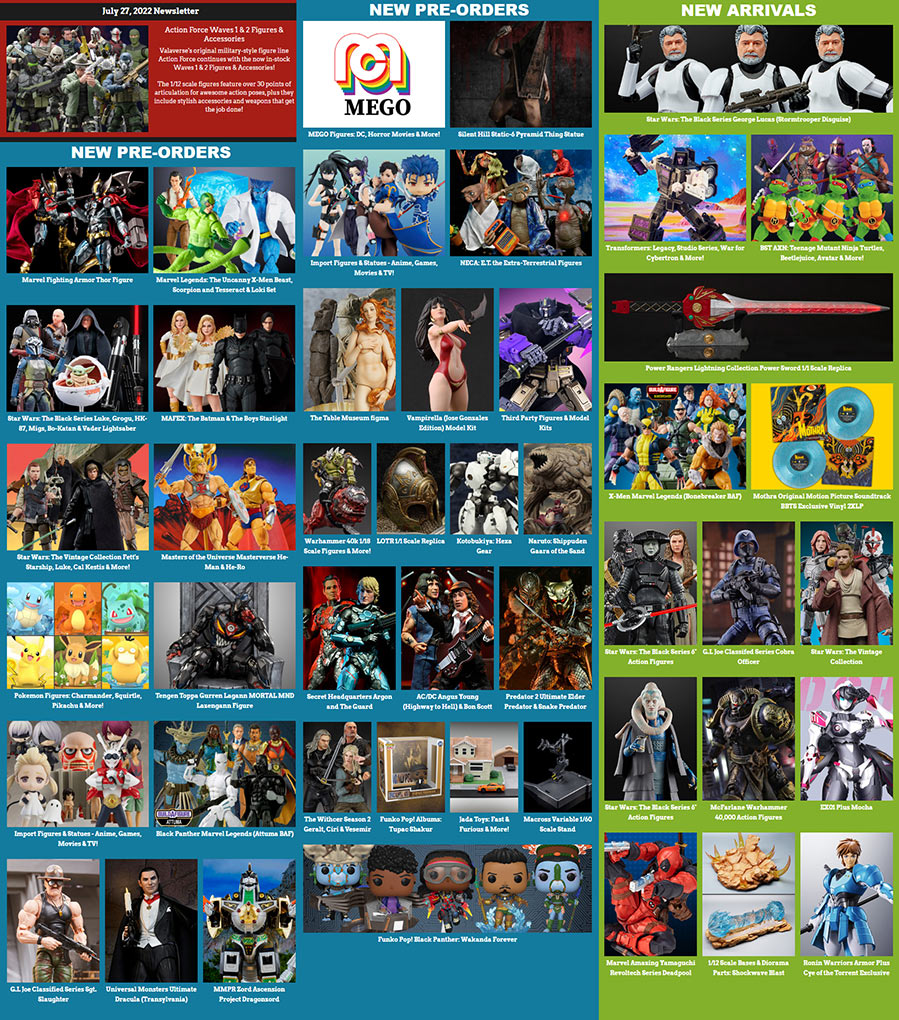 --------------
NEW PRE-ORDERS
--------------
What if Tony Stark integrates each of the Avengers super power into an armor? - Check out the Marvel Fighting Armor Thor Figure! Scorpion & X-Mens Beast have been added to Marvel Legends Retro Collection, plus Loki is available as a Marvel Legends figure with a life-size tesseract, dont let him get away with it! Grogu, Luke, Bo-Katan and more have been added to Hasbros Star Wars: The Black Series! Starlight from The Boys and The Batman have joined the MAFEX line-up! Luke, Cal Kestis & more have joined the Hasbro Star Wars: The Vintage Collection! Its been 84 years. Well not quite but it has definitely been 40 years with Masters of the Universe! Add to your Pokemon collection with the adorable figures from Funism! From CCS Toys comes a nearly 10-inch tall figure of Lazengann from Tengan Toppa Gurren Lagann! Check out the lates additions to the Import Figures & Statues Page! Wakanda Forever! Characters from the upcoming Black Panther Movie have joined the Marvel Legends Series! The Sgt Slaughter figure comes ready for action to the G.I. Joe Classified Series! To celebrate the 90th anniversary of Universal Monsters' acclaimed silver-screen classic, NECA announces an Ultimate action figure of the most famous vampire of them all Dracula! The crackle of unreleased energy. The smell of ozone. The feeling that something big is about to happen when you know you are in the calm before the storm. Welcome to Zord Ascension Project, the next evolution of Lightning Collection! Mego has released figure from DC, Horror Movies & More! Find your favorite movie, anime, TV & video game characters like Chun Li, Shinobu Kochou & more on the Import Figures & Statues page! E.T. phone home NECA presents our favorite extra-terrestrial! Bring some of the most famous works of art to your shelf with The Table Museum figma! X-Plus brings us a plastic model kit of Jose Gonzalez's gorgeous cover art for Vampirella's comic No. 19 "Super Special Issue"! Lots of Third Party Figures and Model Kits like the Legend Reborn LR-03 The Ash Lord Model Kit are now available for pre-order! Joy Toy's 1/18 scale world of Warhammer 40K continues with Squighog Nob On Smasha Squig! Prepare for battle with the LOTR King Theoden replica! Kotobukiya has released more Hexa Gear model kits! HEX Collectibles presents the Gaara Ultimate Diorama Statue in 1:8 scale from Naruto Shippuden! From Secret Headquarters, the new superhero movie coming this August exclusively to Paramount+, featuring the likenesses of Owen Wilson and Michael Peña, these 7" scale action figures are fully equipped to save the world! The rock legends Bon Scot and Angus Young are now NECA figures! The Snake and Elder Predator from Predator 2 have joined the NECA Ultimate series! Dark Horse gives us Geralt, Ciri & Vesemir form The Witcher season 2! Tupac is back as a Pop! Albums figure! Help Dom and his crew as they continue their global exploits in the unstoppable franchise built on speed! At last -- a display base designed especially for Arcadia's 1/60-scale "Macross" models! This unique base can support your "Macross" Variable Fighters in any of their forms! Funko Pop! brings the world of Black Panther: Wakanda Forever to life!

------------
NEW ARRIVALS
------------
We pay homage to George Lucas and his remarkable accomplishments in film with a likeness of the director himself, clad in the distinctive armor of an Imperial stormtrooper  now in stock! Harness the power of Energon with the newly arrived Transformers Legacy Series Commander Decepticon Motormaster robot toy! The Loyal Subjects presents the Teenage Mutant Ninja Turtles & more - add them to your cart today! The Power Sword Replica from the original 1993 TV series is now in stock! Wolverine and other X-men Marvel Legends figures from the Bonebreaker BAF have arrived! The BBTS Exclusive Mothra Vinyl Record is instock! Lots of Star Wars: The Black Series figures are now in stock! The newly arrived Cobra Officer figure comes ready for action, with multiple points of articulation for high poseability and 9 character-inspired accessories. Obi-Wan, Bo-Katan, BBTS ARC Trooper & more have arrived from Hasbros Star Wars: The Vintage Collection! Not even the Space Marines are safe from the lure of Chaos - nor are we safe from adding the in-stock McFarlane Warhammer 40k action figures to our carts! From Big Fire Bird, the EX-01 Plus Mocha is here and ready for battle! The Merc with a Mouth has arrived as an Amazing Yamaguchi! As some Shockwave Blast to your 1/12 scale display! The Ronin Warriors Amor Plus Cye of Torrent from Bandai Spirits is here!
SEND