BBTS News: Voltron, Transformers, Mortal Kombat, DC MAFEX, MOTU, Umbrella Academy, Mega Man, Zelda, TWEWY, Evangelion & More!
Posted by Joey on July 28, 2021 at 04:05 PM CST
--------------
NEW PRE-ORDERS
--------------
Introducing the VOLTRON, a new CARBOTIX series that Blitzway has ambitiously prepared. In order to perfectly reproduce the Voltron that appears in the anime, Blitzway carefully analyzed the five lions. Free-moving joints that could reproduce their dynamic poses in the animation, while maintaining perfect proportions while in their lion states. The female Ninja Robot Nightbird who played an active part in the original Transformers animated series episode 17 is now available as the Masterpiece "Nightbird Shadow"! Storm Collectibles next Mortal Kombat figure is Kintaro! The Umbrella Academy action figures are here! Based on characters from the hit Netflix show, this lineup promises to delight fans. These highly articulated 1:18 scale figures allow you to pose the character to fit your imagination! Based on the Return of Superman storyline, the MAFEX Cyborg Superman is a highly detailed figure. Cyborg Superman features a high level of articulation for acting out all of your favorite scenes, along with a fabric cape, multiple hands, with blaster and blast effect part! From the classic video game The Legend of Zelda: Skyward Sword comes a rerelease of figma Link! From the Rebuild of Evangelion film series, the ROBO-DOU EVA Unit-01 Test Type is a non-scale figure standing about 10 inches tall with 48 points of articulation. Add your favorite General Mills cereal mascot to your collection with these action figures! 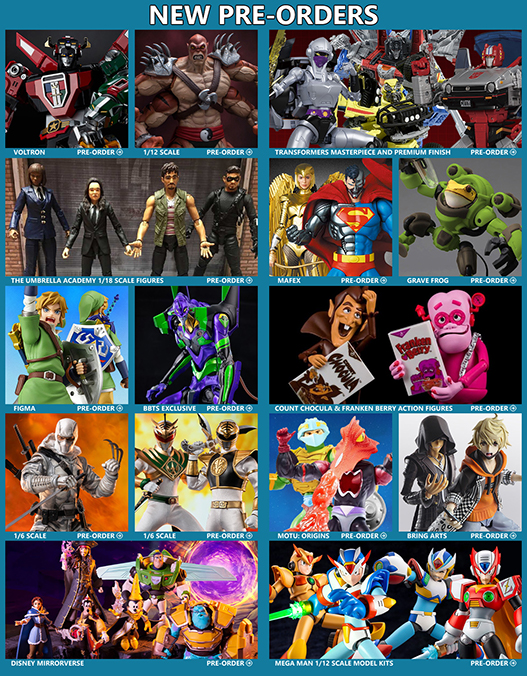 ------------
NEW ARRIVALS
------------
New arrivals are here from the Masters of the Universe: Origins line including Deluxe H-Man, Skeletor and Clamp Champ! From MacFarlane Toys comes the latest addition to the Mortal Kombat line of figures! This 7 inch scale Kabal figure features 22 points of articulation and a high level of detail based on his looks from the Mortal Kombat XI video game. Robin is back in stock from McFarlane's DC Multiverse series of figures. Hot Toy's 1/6 scale Spider-Man, from Far From Home, is ready to swing into your collection wearing an upgraded suit! 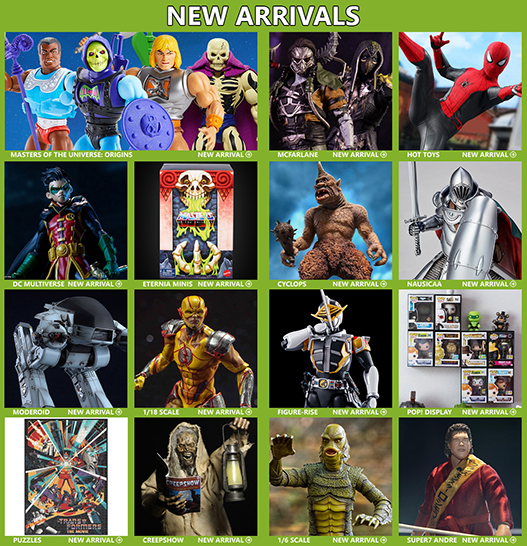