Expand Your Mind - Battle of Christophsis
Posted by Liam on March 7, 2022 at 09:15 AM CST
Hey there, Rebelscum fans! This week on the site were looking at one of the most pivotal battles in the course of the Clone Wars. Not only did this victory seal the Republics dominance over a pivotal hyperspace lane in the Outer Rim, but it provided one of the most important moments in the history of modern Star Wars. This is where Anakin Skywalker first met Ahsoka Tano, and officially adopted her as his padawan. Make sure to stay tuned throughout the week for more articles, insights, videos, and information on the best merchandising content.

When The Clone Wars was being developed, something George Lucas had in mind as he finished up work on the prequel trilogy was introducing a new generation of fans to the galaxy far, far away through a new character that they could relate to. Over the course of plotting out the first Star Wars 3D animated series, it was decided that giving Anakin or Obi-Wan a new, young apprentice would help change the dynamic between the two before the events of Revenge of the Sith. 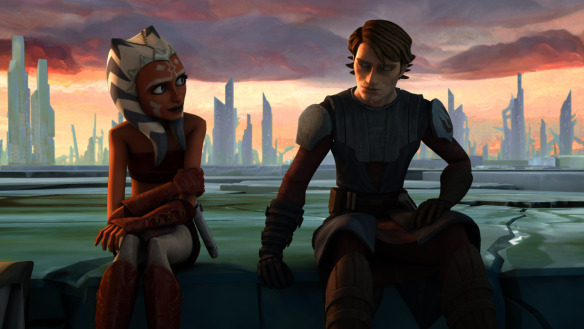 Ahsoka Tanos introduction in the film Star Wars: The Clone Wars presented an unknown quality for the series moving forward, as her fate had not been previously established by the prequels. It also adds a new insight into Anakins character; how did he fare as a teacher? After Ahsokas surprise introduction, Anakin is initially not receptive of his new padawan, as he is in the middle of leading the conflict on Christophsis.

Its a hectic battle where the Republic forces are outnumbered and outgunned, and a Separatist shield generator has made it difficult for the combined clone forces of the 501st and 212th battalions to make any advances. Anakin and Ahsoka team up to go behind enemy lines, and in one particularly embarrassing moment for Anakin, hes nearly killed when Ahsoka brings down a shattered wall upon several droids approaching his location.

Although the early animation of the first stages of The Clone Wars would grow more defined in subsequent seasons, the Battle of Christophsis had the important role of introducing a childs perspective on the reality of war. Ahsoka learns her first lessons about conflict from an initial meeting with Captain Rex in a friendship that fans would watch grow for nearly 15 years.

Due to the nature of The Clone Wars timeline, several episodes of the series flashback to events that take place prior to the theatrical film itself. The first is season ones The Hidden Enemy, in which Captain Rex and Commander Cody look for a conspiracy within the Republic Army when they suspect there could be a traitor in their midst. Its revealed that the turncoat is none other than the clone Sergeant Slick.

Season twos Cat and Mouse featured a space conflict where Anakin Skywalker teams up with Admiral Yularen to take down the legendary villain Admiral Trench. In order to stop a Separatist victory, they must adopt the use of an experimental stealth ship with a cloaking device. Christophstis also plays an important role in the newly-introduced High Republic era.

What do you think, Rebelscum fans? Were you surprised to learn that Anakin Skywalker would be getting an apprentice? Do you like The Clone Wars prequel episodes? Let us know in the forums, and as always, may the Force be with you!