Force Casting - The New Jedi Order!
Posted by Liam on August 8, 2021 at 12:05 PM CST
Hello, Rebelscum fans! Were covering The New Jedi Order this week on the site with themed articles relating to the groundbreaking nineteen novels that chronicled the Yuuzhan Vong invasion. Make sure to check out the "Expand Your Mind" base article that explains the history and importance of the storyline, and our "Timeline Breakdown" that explores connections to other Legends stories and a "Character Profile" of some of these series most popular characters. Subscribe to us on YouTube to catch Bobbys upcoming videos on this era! 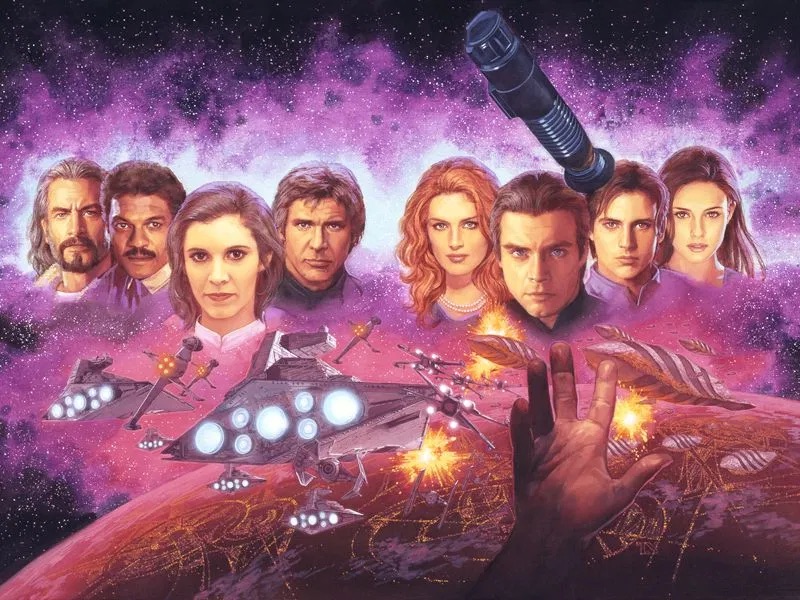 Years before the sequel trilogy came to fruition, fans speculated if Expanded Universe characters like the Solo twins or Mara Jade would ever be brought to life in a film or series. We still think that The New Jedi Order and the subsequent Legacy of the Force and Fate of the Jedi are among the best Star Wars stories ever told. It may be challenging to fit all these characters into a film or even a trilogy, but if done correctly, a Star Wars: The New Jedi Order series could be an epic drama series to rival Game of Thrones or Battlestar Galactica.

Its unlikely that well see an adaptation of The New Jedi Order now given that the events are non-canon, but its always fun to speculate, and who knows? Weve seen Disney introduce alternate timelines within the Marvel Cinematic Universe, and DC has created solo films like Joker and the upcoming The Batman that take place outside of the canon of the DCEU. Perhaps an alternate Legends universe could return alongside the new stories developed for canon?

We put together our dream cast for what a The New Jedi Order trilogy or series would look like. Obviously, wed want the core actors back, including Mark Hamill, Harrison Ford, Billy Dee Williams, and Anthony Daniels. The events of The New Jedi Order take place only 21 years after Return of the Jedi, but the inventive digital de-aging technology witnessed in the season two finale of The Mandalorian certainly shows that actors appearances can be altered. Were going to try and cast for actors that can play these roles across adaptations of The New Jedi Order, Legacy of the Force, and Fate of the Jedi. 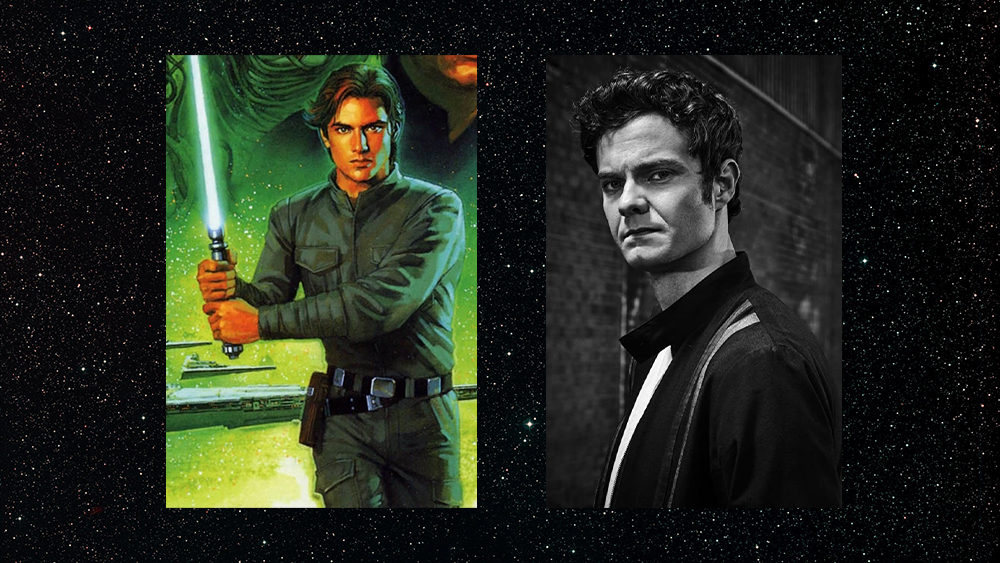 Jacen Solo is among the most complex characters in Star Wars Legends, an initially headstrong and often humorous character akin to his father whose chaotic upbringing leads him to the ways of the dark side. We think that The Boys star Jack Quaid could retain a lot of Harrison Fords charisma, and his dramatic chops suit him well for the darker turn later on. 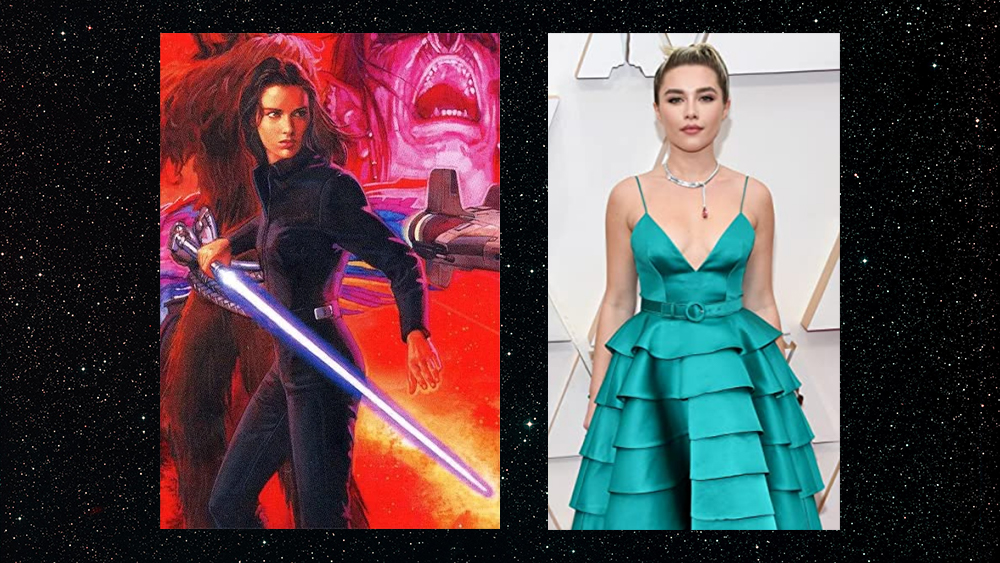 Ultimately, it is Jaina Solo who becomes the central hero of the New Republic, a skilled and thoughtful Jedi whose grace solidifies her as a leader, even during her challenging duel against her brother. Jainas development is significant, so we picked Florence Pugh, the skilled dramatic actress of Little Women and Midsommar who showed some serious action abilities in the recent Black Widow film. 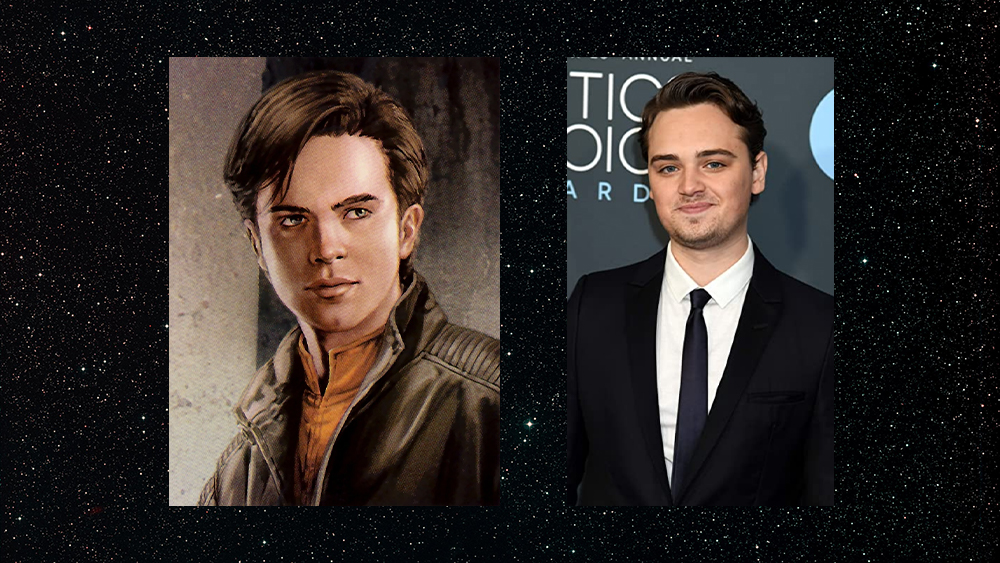 Anakin Solos death is among the most crushing events in all of the Star Wars Expanded Universe, and while an actor would need to make this tragedy an emotional event, they also need to have great chemistry and banter with the other Solo children. British actor Dean-Charles Chapman, best known as Tommen Baratheon on Game of Thrones and for his powerful role in the war film 1917, was able to make us fall in love with those characters before they met their eventual fates. 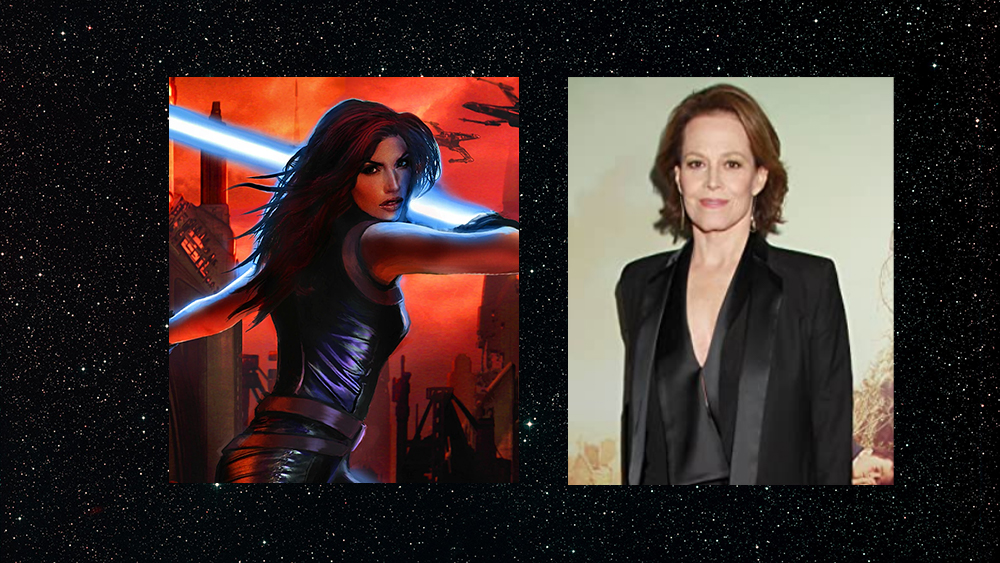 One of the most popular characters in Star Wars Expanded Universe (and probably Star Wars in general), Mara Jade demands a seasoned actress worthy of the role. Who better than another sci-fi icon, Ripley herself? We think Sigoruney Weaver would make a great foil for Mark Hamill, although it might make our collective Star Wars and Alien fan dreams explode. 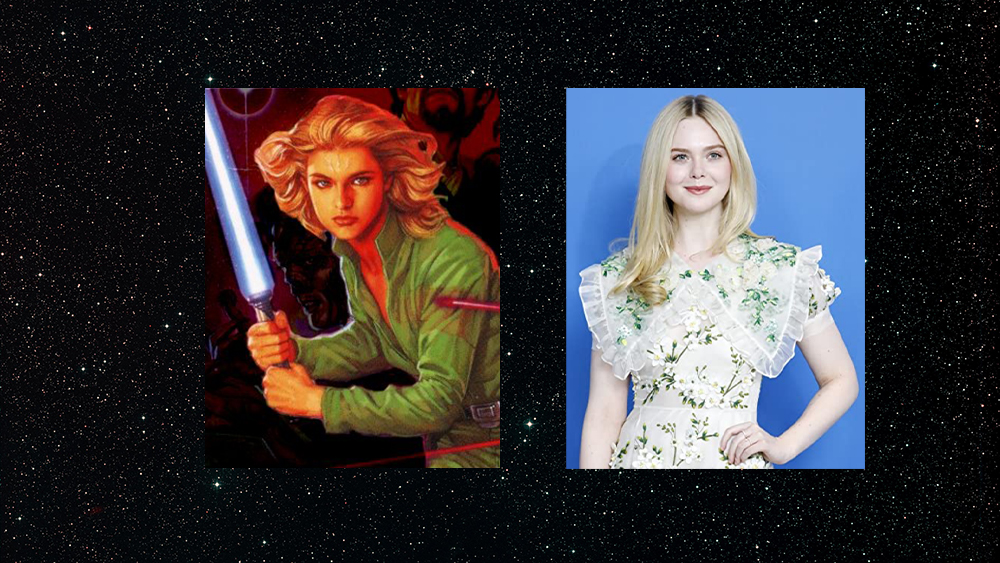 Tahiri goes through a lot as a character; raised by the Tusken Raiders on Tatooine, Tahiri is tormented during the Yuuzhan Vong invasion after the death of her lover Anakin Solo and the Vong torture after shes captured following the assult on the Jedi Praxeum. "Shaped" by the Vong into a hybrid, Tahiri is in touch with the living force, but later seduced to the dark side by Jacen Solo. We think this role requires a young actress who can show Tahiris growth, and while Elle Fanning is versed in sci-fi thanks to Super 8, shes proven to be one of the most versatile young performers of her generation in films like The Neon Demon, Teen Spirit, Live by Night, The Beguiled, Trumbo, and 20th Century Women. 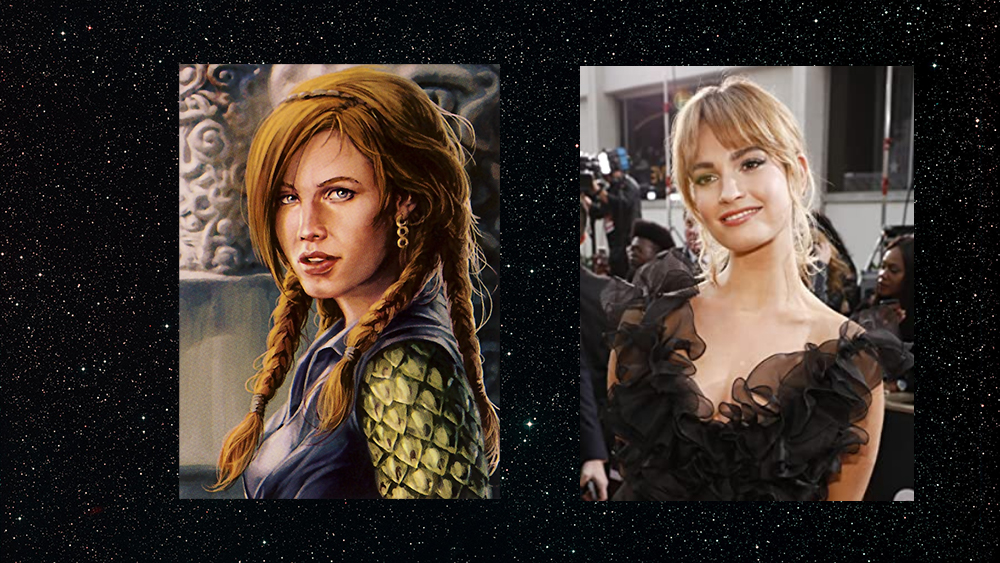 Born among the Hapan royalty, Tenel Ka Djo embraced the traditionalism of Luke Skywalkers Jedi Academy, taking to a strict and measured routine. The stern Jedi Knight would fall in love with Jacen Solo, but would bitterly fight against him during the Battle of Kashyyyk in order to protect their daughter Allana. The role requires an actress gifted at bringing action sequences to life who can also break down the characters tough exterior, so weve selected Lily James. Lily James is no stranger to playing royal characters given that she was Cinderella, but the actress who generally appears in British period pieces has shown a versatility that includes action-centric roles like Baby Driver and Pride & Prejudice & Zombies. 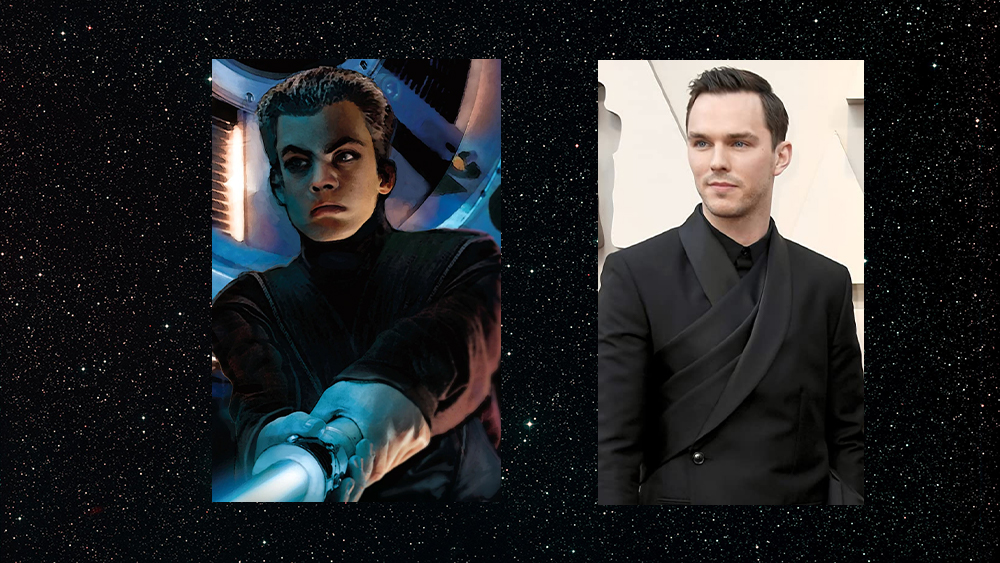 Ben Skywalker is an interesting character, as hes initially bound by loyalty to his cousin Jacen before his eventual turn. Fate of the Jedi really gets to explore the relationship between Ben and his father Luke, and the often comedic father-son banter produced one of the Expanded Universes most interesting story arcs. Nicholas Hoult can do pretty much anything, whether hes a ravid war-bred child in Mad Max: Fury Road, a scheming politician in The Favorite, or the geeky Beast in the X-Men franchise. 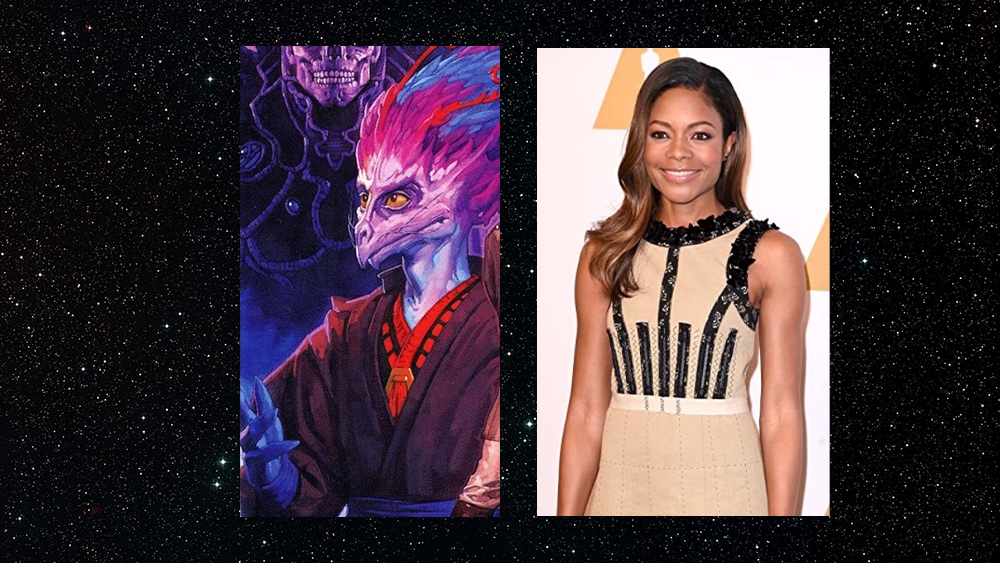 Vergere was a Jedi Knight of the Galactic Republic who was captured shortly after the events of The Phantom Menace by the Yuuzhan Vong, and she lived with the species on their homeworld Zonama Sekot for fifty years teaching the Vong about the galaxy. Ultimately an ally of the Vong, Vergere allied with the Sith acolyte Lumiya to attempt to turn Jacen Solo to the dark side of the Force. A member of the Fosh species, Vergere would need to be brought to life through either extensive makeup or motion capture technology. Naomie Harris is a British actress whose easily adapted to key action and science fiction films, including 28 Days Later, Miami Vice, Pirates of the Caribbean, and the James Bond films Skyfall and Spectre, but it was her twisted maternal performance in Moonlight that convinced us shed be perfect for Vergere.