LEGO Skywalker Saga: Deluxe Edition Box Art Unmasked!
Posted by William on August 27, 2020 at 09:52 PM CST
Gamescom 2020 finally gave us fans the first in-depth look at gameplay for LEGO Star Wars: The Skywalker Saga, revealing more about the game's features and characters, all while retaining that classic blend of LEGO and Star Wars that Traveler's Tales have been expertly crafting since 2005.

StarWars.com got an interview with Creative Director of Hubris Studios, Todd Elhart, who worked alongside TT, LEGO, Lucasfilm and WB Games to create the awesome cover for the game's deluxe edition, slated to arrive alongside the regular release next Spring. The cover features Lord Vader in all of his LEGO-fied glory, but if one uses the Force to slip off the cover, it reveals the pasty husk of what was once the Chosen One and Hero With No Fear, Anakin Skywalker.

All Deluxe Edition copies of the game will have the same slipcase cover, and yes, that does include the PlayStation 5 and Xbox Series X versions. It will also come with a character collection bundle pack featuring characters from Rogue One, Solo, The Mandalorian, and the upcoming series The Bad Batch. To be the cherry on the proverbial cake, it will also house an exclusive farmboy Luke Skywalker minifig, with a carton of Blue Milk and an accompanying mustache! 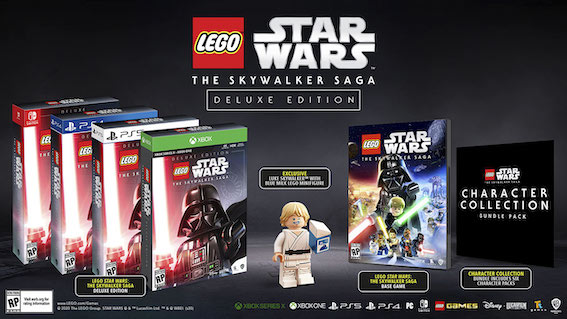 As of today (8/28/2020,) the Deluxe Edition doesn't seem to be up for pre-order as of yet, but it's safe to assume that it will go up as a separate listing, much like the Deluxe Edition for LEGO Star Wars: The Force Awakens did only 4 years ago. As always, stay tuned to Rebelscum for further updates!

And just in case you missed it, here's the gameplay reveal trailer from yesterday in all of its Yaddle-showcasing, blue milk-drinking glory:

Preordering the game through Best Buy will provide a sweet-looking steelbook case of LEGO Han Solo frozen in carbonite!