A long time ago in a theater probably not too far from your house, Star Wars was released -- May 25, 1977, long before the original space opera was rechristened Star Wars: Episode IV  A New Hope. To celebrate that 45th anniversary, Heritage Auctions is thrilled to offer in its July 22-23 Hollywood & Entertainment Signature® Auction two of the rarest and most coveted items featured in the film that spawned a never-ending franchise: a screen-matched stormtrooper helmet and a screen-used hero E-11 blaster shared by stormtroopers, Han Solo, Luke Skywalker and Princess Leia.

Weve got a good feeling about this.

Finding screen-matched props from Star Wars is virtually unheard-of, says Joe Maddalena, Executive Vice President at Heritage Auctions. Ive had the pleasure and privilege of offering several items from the movie that changed everything. But there is something particularly magical about the helmet and blaster. These recognizable, revered items were made for a movie that was turned down by studios before 20th Century Fox OKd a franchise that continues to thrive in the 21st century.

When George Lucas began shooting Star Wars in the Tunisian desert in March 1976, only six stormtrooper helmets were completed in time for filming. These first helmets were later dubbed sandtroopers by fans and ultimately by Lucasfilm. In addition to their custom, desert-worn weathering, these helmets also featured unique hand-painted detailing that differs slightly from all the other stormtrooper helmets finished and used later.

Of these six original sandtrooper helmets, only two are confirmed to exist in private hands. Heritage Auctions is offering one of the two.

In addition to being one of the surviving original first-produced and first-filmed stormtrooper helmets from the original Star Wars, this specific helmet can be conclusively identified on-screen across multiple sequences. It was also worn by one of the few stormtroopers who delivered dialogue  the very one who speaks to the bartender after Obi-Wan Kenobis, lets say, disarming encounter in the Mos Eisley cantina.

It also screen-matches the one worn by the stormtrooper who talks with the mysterious informant Garindan, then rushes his squad to Docking Bay 94 to stop the Millennium Falcon from fleeing the Mos Eisley Spaceport. His last words were, Stop that ship! Blast em! immediately before being gunned down by Han Solo.

The rushed, handmade nature of the original six stormtrooper helmets ensured that each would appear unique to an observant viewer when finished. The eyes and teeth were cut out by hand from the vacuum-formed shells, leaving noticeably varied results from helmet to helmet. The glossy white spray paint used on the helmets famously didnt take very well, leaving each helmet with a less-than-uniform finish. 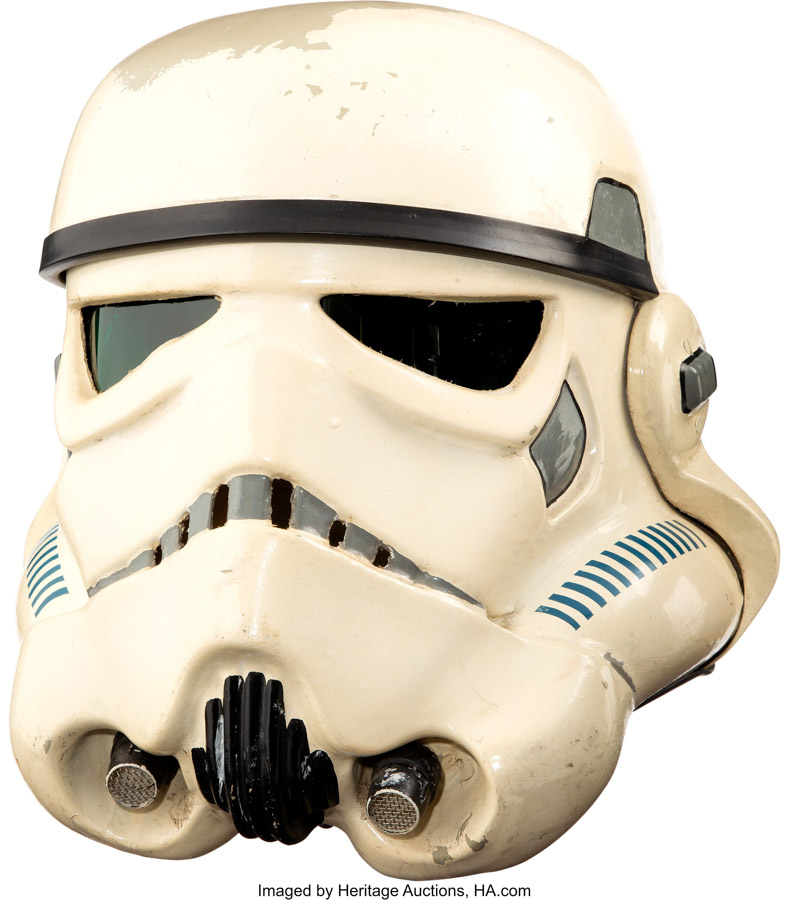 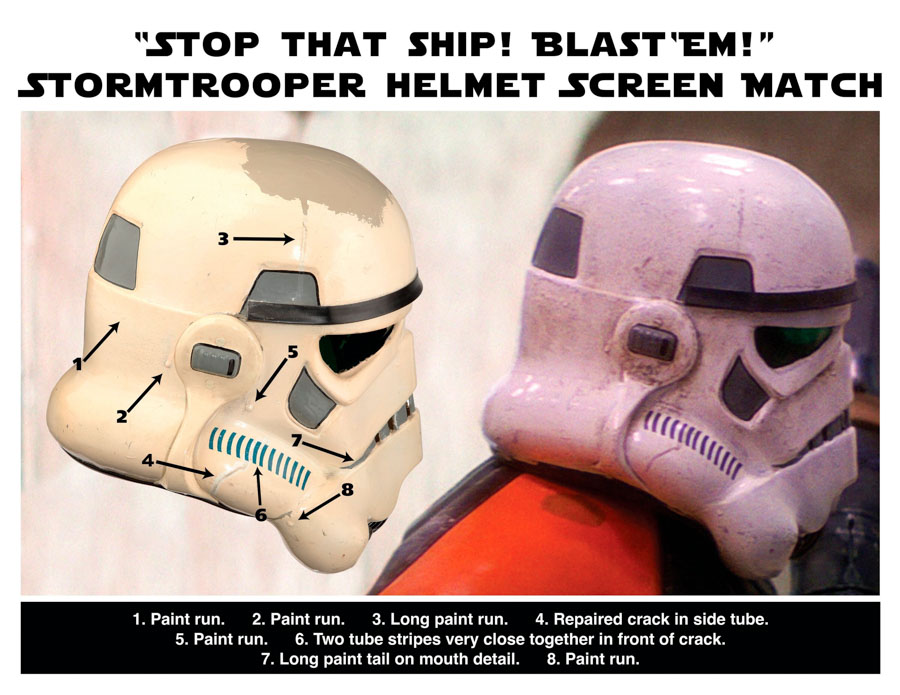 Another Star Wars centerpiece in this star-studded event is that screen-used hero E-11 blaster, which was wielded by both stormtroopers and Han, Luke and Leia during the Mos Eisley Spaceport shootout, the Tatooine scenes, some Death Star sequences  and during the beloved trash-compactor scene.

Bapty & Co., the legendary British theatrical armorer, based this science-fiction weapon on a British Sterling submachine gun, custom fabricating and dressing it specifically for the first Star Wars production. The front section of the blaster is an actual Sterling body tube with the central barrel replaced by a simple wooden dowel painted black.

Custom-made from aluminum, the grip and trigger guard are not standard. The rear section of the Sterling was cut away, and a solid aluminum billet cast specifically made by Bapty & Co. for these props was slotted into the rear of the gun. The billet extends from the rear of the Sterling tube past the ejector port and receiver, rendering the piece a non-working weapon. 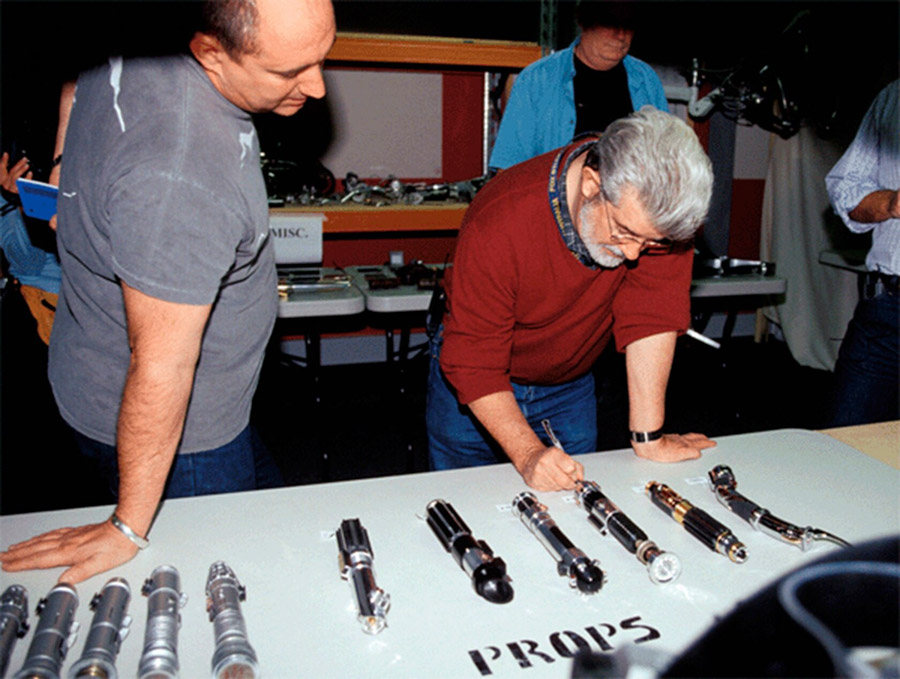 Ewan McGregor "Obi-Wan Kenobi" Hero Lightsaber Hilt from Star Wars: Episode III -Revenge Of The Sith (TCF, 2005). For production on the third and final film in George Lucas's Star Wars prequel trilogy, the props department was called upon to build an entirely new set of hero, close-up lightsaber props, including two alternate builds for Ewan McGregor's Jedi Master "Obi-Wan Kenobi." One group of Kenobi hero lightsaber props was produced to look similar to the legacy prop weapon Sir Alec Guinness's older, "Obi-Wan Kenobi" wielded in the original film (Episode IV) that this film (Episode III) needed to bridge the gap visually ultimately. Another handful of Kenobi hero lightsaber props were produced to resemble the lightsaber carried by Ewan McGregor's youthful, Obi-Wan throughout the previous two film installments, with the thought being the Jedi would ultimately transition between the two props at some point within the story of the film.

When it came time to create new hero Obi-Wan Kenobi lightsaber props for Star Wars: Episode III -Revenge of the Sith, the prop's builder was encouraged to "freshen up" the design from the previous films a bit to denote some passage of time and what resulted was a single notable modification - the addition of an enlarged emitter end cap with three holes that has caused eagle-eyed fans to nickname the other examples of this prop seen in the Lucasfilm Archive... "the salt shaker." This particular style hero prop was well documented and photographed during production, both with George Lucas and later on set with Ewan McGregor, but ultimately scenes with this lightsaber prop didn't make the final cut of the film. An incredibly rare opportunity to own a hero Obi-Wan Kenobi lightsaber hilt from the Star Wars Saga. Made from multiple machined metal parts assembled on a central core with additional metal greeblies, LEDs, and rubber o-rings. A screen used Obi-Wan Kenobi legacy style hero lightsaber hilt from Star Wars: Episode III -Revenge of the Sith sold at auction for $215,000 in December of 2020. Comes with a COA from Heritage Auctions.


Check out Heritage Auctions for lots more items available for auction. Do you have any authentic props in your collection? Drop your pictures in the forums!