LEGO Droid Commander - Powered By STEAM
Posted by Jeremy on February 13, 2020 at 02:57 AM CST
If you're of a certain generation there's an almost immediate association of STEAM with ornate Victorian technology, flying goggles and cosplay. For the strata of population that has arrived more recently and aren't yet old enough to ponder the idiosyncrasies of steampunk, STEAM is an approach to learning that uses Science, Technology, Engineering, the Arts and Mathematics as access points for guiding student inquiry, dialogue, and critical thinking.

First introduced to schools in the US during the early 21st century, the benefits of STEAM were quickly recognised and adopted in other education systems around the world hoping to not only increase literacy in those content areas but also expand existing work forces of scientists and engineers in increasingly STEAM-based economies. 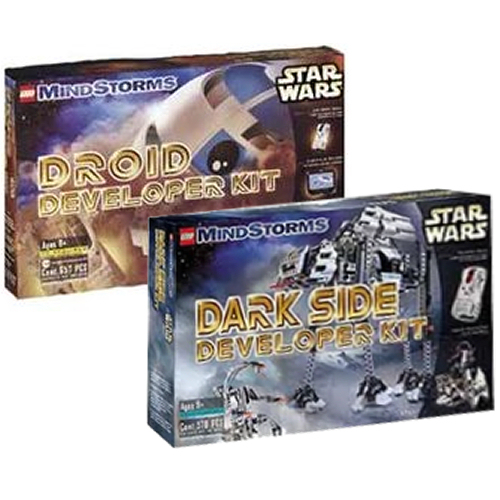 LEGO, who hooked in to the STEAM concept early on with their Mindstorms (which had two sister Star Wars sets - 9748 and 9754 - released in 1999/2000) and NXT programmable robotics packages aimed at teenagers, recognised the need to be at the forefront of introducing younger students to the approach of combining the STEAM subjects and so created a compatible learning experience by pivoting their early-learning toys and designing a number of coding packages - such as BOOST - that integrate with various LEGO sets.

Released in mid-2017, the original BOOST set (17101) is billed as a creative toolbox containing hundreds of LEGO elements and a programmable hub that contains a number of sensors, and a motor. The set, which is aimed at kids ages 7 and up, included instructions for five models that could be built, played with, programmed and controlled using an iPhone or Android app. Using the app, which interfaced with a specially developed version of MIT's Scratch coding language, kids were encouraged to work through a series of problem solving challenges to open up new build opportunities.

Critically, however, most children in the 7+ age group that 17101 Boost Creative Toolbox was aimed at already had exposure, through school curriculum and coding clubs, to the block-based Scratch programming language and found that the bespoke interface was too simplistic. Another failing - not by LEGO this time but of the kids - was that the end-users only really wanted to build Vernie, and being the progeny of Gen X-ers who remembered Short Circuit with fondness, were encouraged to do so by their parents. Even with a number of books supporting the technology it didn't prove to be as popular as expected. 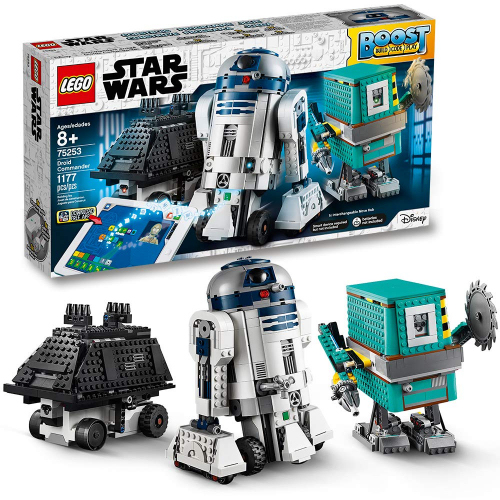 That didn't deter LEGO who announced their Star Wars version - 75253 Droid Commander - as part of the May The 4th Be With You event in 2019.

Taking feedback from consumer surveys and user groups LEGO reduced the number of models from five to three, a decision based on the observation that kids typically only built one BOOST model, leaving it intact for the rest of its life.

In order to encourage kids to build and learn the development team at LEGO determined that making the programmable hub interchangeable between the buildable robots would be the way to go, and so selecting three appropriate automatons became the next hurdle.

Early on LEGO realised that R2-D2 was a no-brainer. Being one of the heroes of the Star Wars saga and already having made appearances in the Technic, Mindstorms and Ultimate Collector Series themes, there was no contest. Casting their collective eyes around the rest of the Star Wars universe, the BOOST team quickly locked on to the Mouse droid from the Death Star and, instead of the more common power droid held by the Jawas on Tatooine, the teal* Gonk droid seen in the battle pits of Numidian Prime during Solo: A Star Wars Story.

This trio of models provided the team at LEGO with three different means of movement: rolling, driving and walking and so the designers turned to the Technic development team to help them create models that were equally toy-centric in the Star Wars universe and functional in the BOOST one. Unlike the builds in the original 17101 BOOST Creative Toolbox, which had to be broken down in turn to allow the next model to be constructed, the three Star Wars droids could be assembled - but not controlled - at the same time.

Controlling the robots is a re-developed app. Based off the original BOOST package, and still using the core Scratch visual programming language, the new platform has the end-user building each model through a series of story-driven problems - giving 75253 Droid Commander a unique interactive mission-based instruction manual.


With this latest BOOST incarnation aimed at the slightly older 8+ age group - with 12 year olds being the upper end of the ideal audience - Rebelscum roped in our junior resident reviewer, Oscar, who quickly got stuck in to the task of building all three Star Wars droids.

Of the three it was the Gonk he had the highest hopes for and was desperate to re-enact the battle bots scene in Solo, but because it walked "like its shoes were tied" and tended to fall over easily he moved his trials on to R2-D2. Despite scoring high for accuracy and looks this model didn't meet with his approval for the simple reason that it was "too upright" which made R2 look desperate for attention, explained Oscar. In the end his clear favourite was the Mouse droid which was both a stable and accurate build, though lacking in any exciting appendages (the Gonk was the clear winner there). 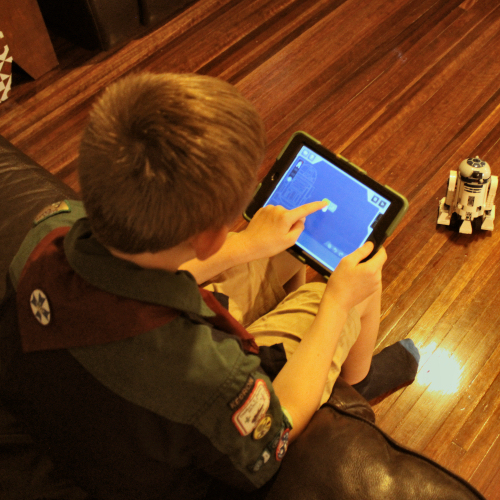 The new app, Oscar explained, had more of a game play feel to it and reminded him of the LEGO Star Wars video games. Based in Mos Eisley the builder is immersed in the instructional guidelines that create a story that moves the droids through their different phases of development. With each successful mission - i.e. step - the builder is rewarded with new phases of constructions and programming features. This leads the builder and droid through ever more complex situations - eventually ending up in a free play mode. Quite the lesson on life!

Moving on to the programming phase Oscar decided that this would be a good opportunity to get his Scout technology badge, so he invited Charlie, Jack, George, Alannah, Felix, Illiana and Maya - a group of 9 to 11 year old school friends - over to learn about robotics and experiment with both the 17101 Boost Creative Toolbox and 75253 Droid Commander packages.

All six had been hand-picked by Oscar for their LEGO building experience, problem solving skills and what kind of snacks they'd bring. (Alannah, who brought homemade cupcakes for everyone, won the last category.) With his team fully briefed on the history of robotics he gave them a demonstration on how to use the BOOST software to programme Vernie, from the BOOST Creative Toolbox (17101).


Having learned the basics of the interface the kids broke into groups to explore what the differences between the two sets were and expand their knowledge on the control systems. Given that all the in grades 5 or 6 this was achieved with ease, and they were soon setting each other tasks and creating obstacle courses for the robots to complete. Their reward for an afternoon of fun, learning, games and snacks was a quick session of free play using a third part remote control app (available on Android and iOS) a trial of building ingenuity, programming skill and good old human reflexes in a special BOOST combat challenge. Unsurprisingly this proved to be more popular than the set-piece programming. 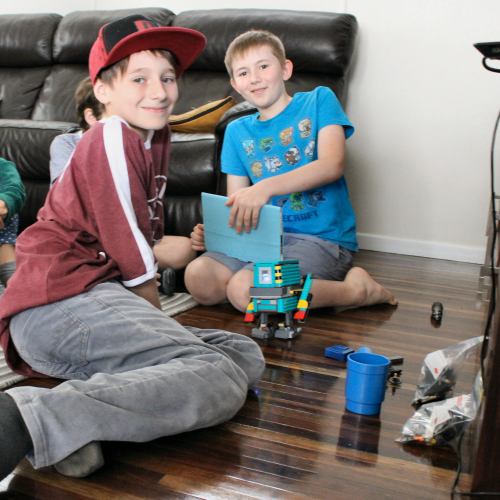 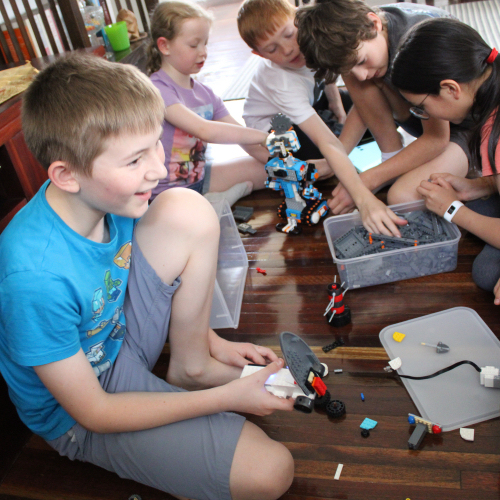 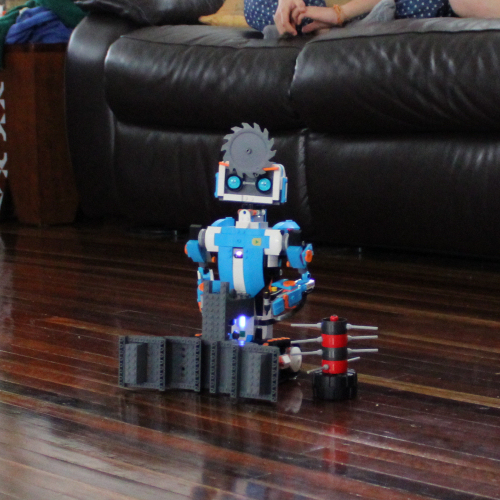 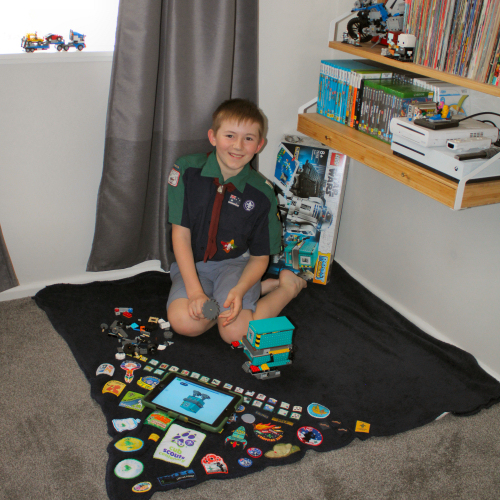 Oscar's final verdict is that while they are a lot of fun neither BOOST sets quite fulfil their purpose. As building sets they're interesting but that's not what they're really about, and his - along with the rest of the coding gang - opinion is that the original BOOST app is a bit too little simple, and LEGO should have stayed with the the visual format that MIT came up with for presenting Scratch coding. And if you think about it, that makes sense because Scratch uses interlocking blocks - just like LEGO does. You'd think that Scratch and BOOST are a match made in heaven, though somewhere along the way that connection got lost. There is a silver lining in this tale because Oscar received his technology badge for all the effort he put into this exercise. Congrats!


Even though 75253 Droid Commander has been recognised by the The Toy Association and nominated for a Toy of the Year Award in the STEAM category, this set has hardly taken the worlds of Star Wars or STEAM by storm. And despite the limited-time offer of a free polybag containing scaled-down versions of the three robots, sales of 75253 Droid Commander didn't take off. 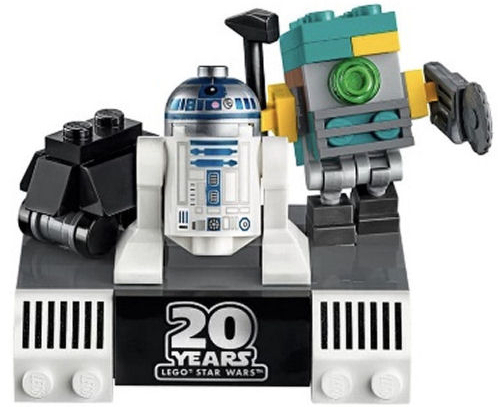 Should you want to encourage learning and development in a child's life or add this to your collection this set, priced $199.99, is available at the following retailers.

If it is 75222 Droid Commander polybag that has caught your eye you will need to look the secondary market - like eBay.com or Bricklink where it commands a similar price to its parent's MSRP - until LEGO decides to release any unused stocks.

In the spririt of disclosure LEGO provided this set for review while we provided our own opinion. Some of the links in this article may generate a small affiliate income which goes to help continue bringing up-to-date Star Wars collecting news to the community.

*Steve Geist, one of the lead designers on 75253 Droid Commander, provided the inside scoop on the use of teal, which "is the same colour scheme as Rock Raiders. I did that on purpose. This, here, is the 20th anniversary of Rock Raiders. he declared.
SEND