Mini Steps: Princess Leia Evolves
Posted by Jeremy on June 8, 2020 at 04:20 AM CST
From princess to senator to commander to infiltrator to general to mother to padawan to mentor, the career path of the most famous woman in the Star Wars galaxy has been as numerous as her wardrobe changes and his latest Ministeps column Kevin Downard looks at the revolutionary costumery of Leia Organa-Solo-Skywalker. 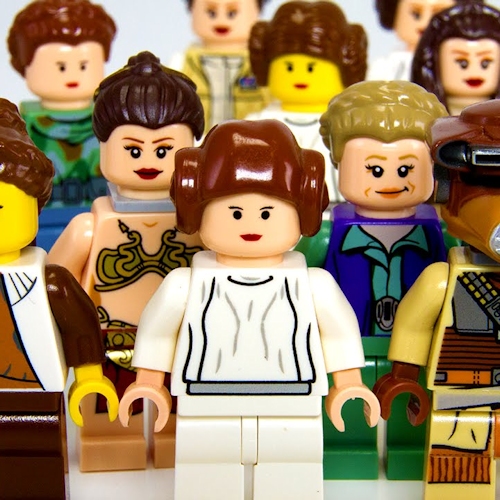 Being the first major character revealed in the Skywalker Saga, Princess Leia has been a fan favourite and pop culture icon since she first appeared in Star Wars in 1977. It wasn't until 2000 that this character became minifigured and since then there have been a total of 26 different versions in nine different outfits, and this article delves into each.


LEGO Star Wars fans were first introduced to Princess Leia in minifigure form in 2000 with the arrival of 7190 Millennium Falcon; dressed in the gauzy white outfit she was wearing when rescued from the Death Star, this inaugural minifigure featured a yellow printed head and her distinctive brown bun hair. Though this figure was only released in this set to the set it wouldn't be updated version until 2007 with the release of 10179 UCS Millennium Falcon, marking an eight-year gap in this minifigure adorned in this character's most iconic outfit. 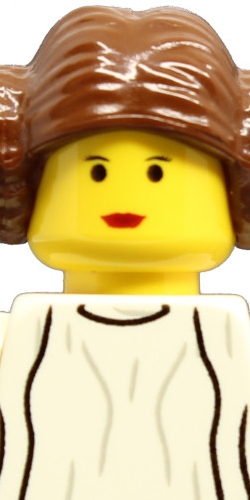 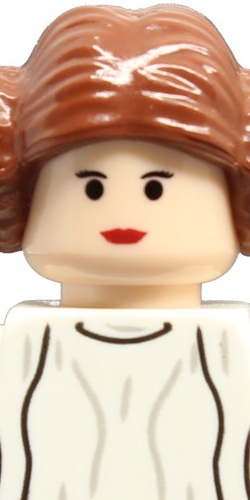 The overall print was identical, but she now had a flesh tone head and reddish brown hair. Additinally this latter version would show up in two more sets (10188 Death Star and 10198 Tantive IV) and a magnet pack. 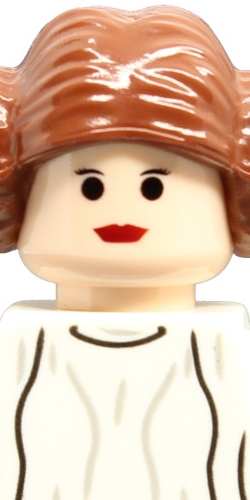 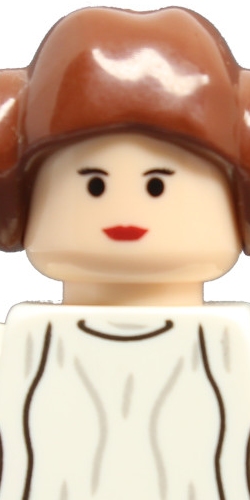 The updated white dress figure would go on to be found with two interesting variants. The less appealing of the two had a face print with large eyes - a trend later popularised with the minfigures based on the Clone Wars TV series - and was found in later copies of 10188 Death Star. The figure is overall the same, but the size of those eyes is exaggerated.

The second variant is the smooth-haired Leia. This figure was found in some early copies of set 10198 Tavive IV. Speculation suggests that a production error caused the hair element to turn out like a glob of chocolate. To date, this is the only molding error that has been found in regular production sets, though the exact number in existence is unknown it is believed to be in the hundreds. In true collector fashion, the demand for this error shot up and so did the price. While not as expensive as some of the exclusive minifigures this variant is definitely one of the most expensive LEGO Star Wars minifigures. 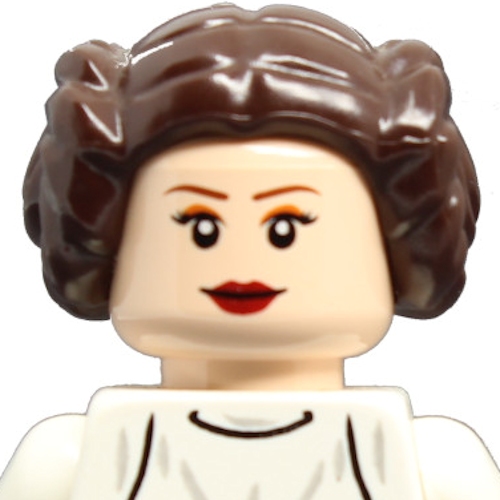 In 2011 in yet another Millennium Falcon (7965), the next A New Hope white dress variant arrived. While the body remained the same as the versions above, the head element produced for the Princess Tamina minifigure from The Prince of Persia theme, released the year earlier, was used. Lastly, the cherry on top (or rather buns on the side) was an updated mold for Leias hair.

Leias next evolution included the first update to the white dress torso by adding extra detail to the belt as well as including back printing. This version replaced the older Leia as the updated 75159 Death Star replaced 10188 Death Star. Additionally, this version added an updated face print. The next variant, found in 75229 Death Star Escape, would remain identical to this version with the exception of yet another new face.

The next iteration was the one that fans had been waiting for. Along with the updated 75244 Tantive IV Princess Leia was given a new printed white skirt element and printed white legs were added to this minifigures ensemble. 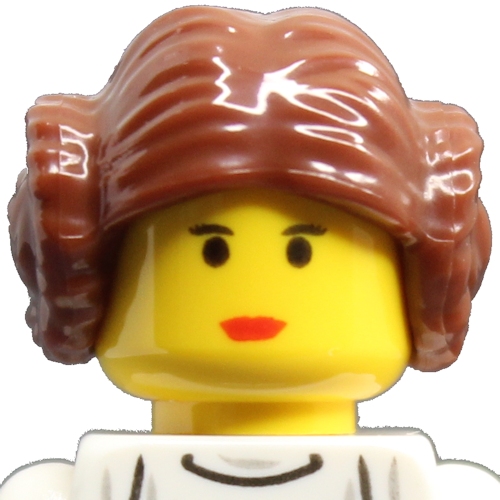 To round out Leias white wardrobe was a throwback to the original Leia. Celebrating the 20th anniversary of the Star Wars, LEGO produced six retro-styled minifigures. One of these was Princess Leia; with an almost perfect facsimile of the original 1999 version, this minifigure had the original hair element, yellow face, and original white dress torso (with the added touch of a silver 20th-anniversary logo printed on the back). The only thing LEGO couldnt capture was the original brown color of the hair! Curiously this A New Hope-attired minifigure was included with 75243 Slave I - 20th Anniversary Edition, rather than the more appropriate Bespin gown. 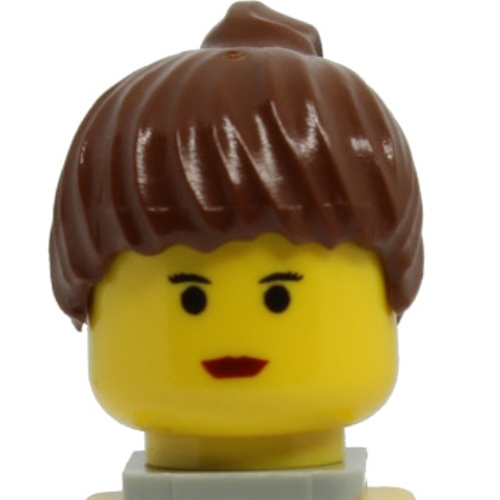 That completes the run of her white Senatorial gown, and the next outfit on the catwalk is the scantily clad slave outfit that Princess Leia was forced to wear during her servitude in 4480 Jabba's Palace. This all-yellow version of Leia came out in 2003 and was limited to this set. 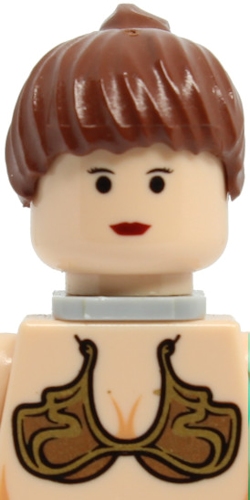 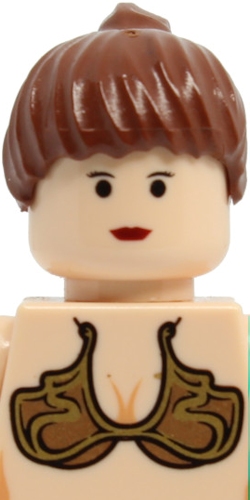 Receiving an update with 6210 Jabbas Sail Barge, Leia's skin tone changed from yellow to flesh, along with the hair element becoming reddish-brown. Like its predecessor, this version was exclusive to just the one set. After a three year gap, the next version was found in a magnet set along with Boba Fett and a Royal Guard. This minifigure had all of the same elements but lacked the neck bracket in its assembly, making it a variant. 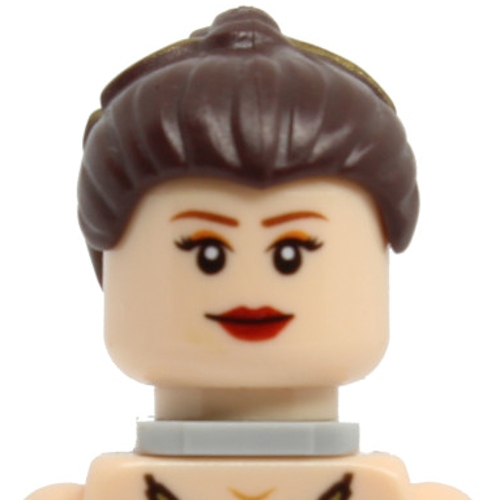 The final version of the bikinied Princess would come in just one set: the updated 75020 Jabbas Sail Barge; with new prints to the torso and legs, and while the hair piece was specifically sculpted for Leia and has never been used for any other minifigure - Star Wars or otherwise - this minifigure shared the head print with two other versions. 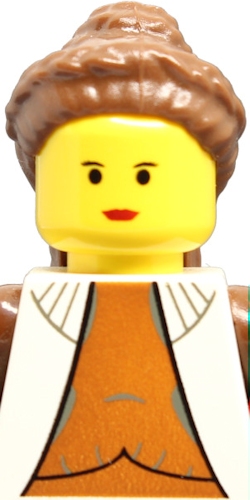 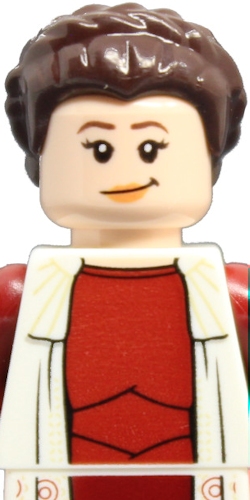 The third Princess Leia costume, which was revealed in 2003, portrayed in minifigure form was only ever found 10123 Cloud City, the next outfit for Leia was her Bespin gown. This original version featured the same yellow head as other early iterations as well as a brown hair piece first used on a Padme figure in 1999. However the torso graphic was highly inaccurate compared to the movie's costume, but given that it was still early days for the theme this was largely ignored.

When the Master Builder Series 75222 Betrayal at Cloud City was released in 2018, Leia received the only update to the Bespin gown print, which gave it a much more realistic appearance. LEGO once again took advantage of the new skirt mold, and the torso print was unique to this set, though the head and hair were recycled from previous Leia minifigures. 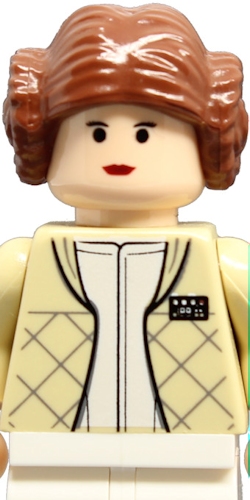 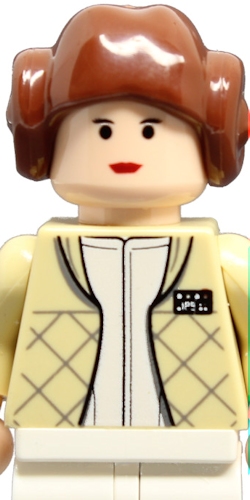 The next outfit we saw Leia in was her Hoth gear. Like so many other debuts, this version came with a new Millennium Falcon (4504) and was the seocnd wardrobe change in 2003. Also issued in 6212 X-wing Fighter, some issues of releases of this set saw another smooth hair element variant for collectors to chase.

The first update for the Hoth Outfit came in 2011 with the release of 7879 Hoth Echo Base; with a new torso print and white arms, the original tan torso element was retained. Trading the classic bun hair element for a braided hair piece completed the upgrade. This minifigure remained the go-to Princess Leia for all the Hoth sets until 2017 with the release of - surprise, surprise - a new Millennium Falcon (75192). This was the first time that Princess Leia in her Hoth outfit received a white torso with tan printing, and was given printed legs for the first time. The head came as a special print with a smile on one side and a breathing mask on the other. The following year the minifigure would remain almost entirely intact for 75203 Hoth Medical Chamber and 75222 Betrayal at Cloud City, except that the head was changed to one with a smile on one side and stern face on the other. 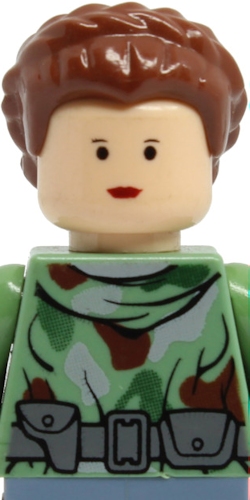 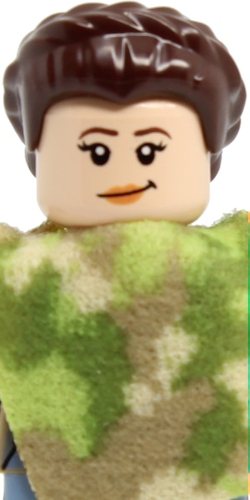 With the major outfits that Princess Leia appeared in winding down, there are only a few figures left to review. The first of these is the Endor Outfit that first came in 8038 The Battle of Endor, and was - chronologically - the first Leia minifigure to come with the braided hair piece. Featuring sand blue legs and a camo printed torso, the head element was the same as that used in other early Leia minifigures. To date this is the second least-updated minifigure when, in 2015, 75094 Imperial Shuttle Tydirium changed the camo-printed torso for a camo poncho made of cloth. 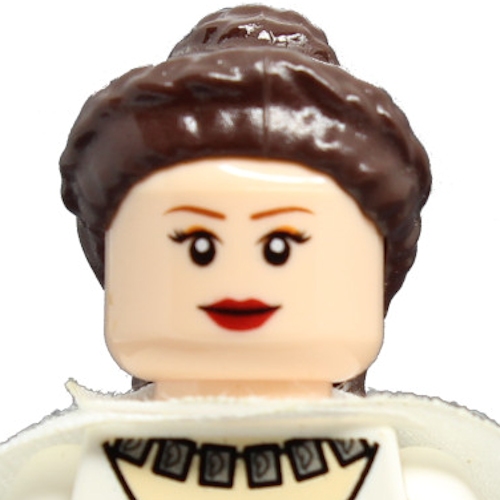 The sixth costume, which can only to be found in 9495 Gold Leaders Y-wing Starfighter, is Princess Leia in her white Celebration attire. She featured the same hair piece as the first Cloud City Leia but is the only minifig to have it in dark brown color. 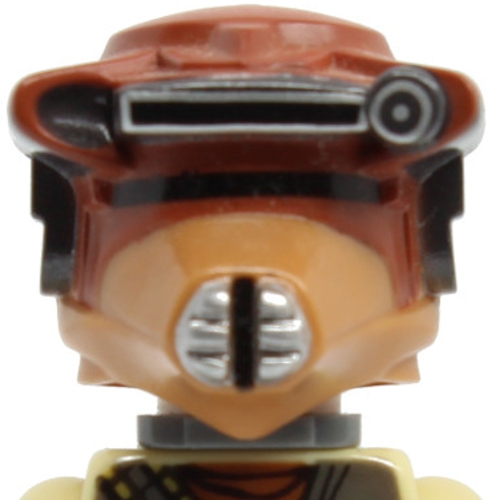 In keeping with Leia figures to only have one version so far is Boushh. Although not technically listed as a Leia minifigure, we all know who was under the helmet. She came in the updated 9516 Jabbas Palace in 2012 and filled a major gap when she was released. The helmet mold is remarkable and is another great example of how unique elements for the LEGO Star Wars theme can be. 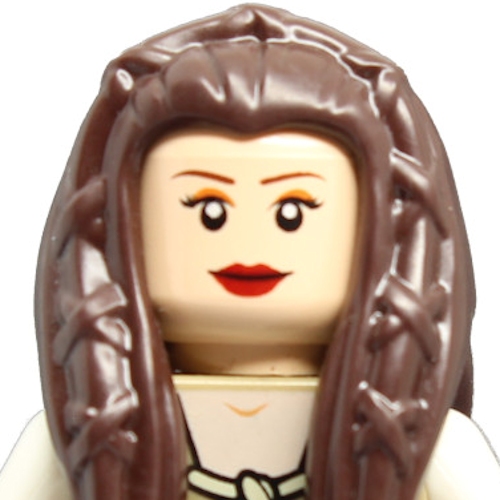 The only other Leia minifigure to have a one outfit wonder is the one worn during her time at Bright Tree Village on the Forest Moon of Endor during The Return of the Jedi. Appropriately she came in 10236 Ewok Village and is the only Leia to come with a cloth skirt. 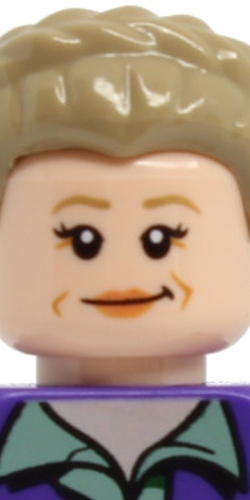 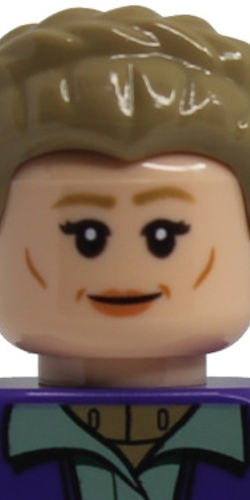 Our final version of Leia is her general outfit as she appears in the Sequel Trilogy; limited to only 75140 Resistance Troop Transport, Leia now had a lighter hair tone instead of the reddish-brown of her younger years. Surprisingly this version, released in 2016, was given an updated print in 2019 to represent Leia as she appeared in the Star Wars: Resistance cartoon series - with a turtleneck collar and less age lines. Included in just one set - 75240 Major Vonregs TIE Fighter - this minifigure was seen as a token inclusion to an otherwise forgettable addition to the LEGO Star Wars theme.

Existing in minifigure form for 20 years now, Princess Leia has had 27 different variants in nine different outfits. Covering 27 regular production sets and 2 magnet sets, the Princess Leia minifigure is nearly as unique as the actress who portrayed this gutsy character.

Are there any versions of Leia that are still missing? Do you think that we will get updates to some of these figures? Will Slave Leia ever make a return? Let us know your thoughts in the LEGO Star Wars Minifigures section of our forums! If you are an aspiring Star Wars minifigure collector you can use Kevin's LSW Collector app to help track your collection - and check out his Instagram account for inspiration!
SEND