BBTS Sponsor News: Batman, MLP Bishoujo, Dumb and Dumber, G.I. Joe, Toys Alliance, DNA Design, TBLeague, Diaclone, NieR, Fairy Tail & More!
Posted by Philip on September 30, 2020 at 04:10 PM CST
--------------
NEW PRE-ORDERS
--------------
Kotobukiya has two new statues out this week with the My Little Pony Bishoujo Sunset Shimmer and Flashpoint ArtFX Batman. New Pop! figures include those from Dumb and Dumber, Star Wars: The Clone Wars and Inspector Gadget. DNA Design has two upgrade kits for Earthrise Scorponok. Toys Alliance, maker of Acid Rain figures, has two new lines with Annex 2179 and Oblivion land set in the same 1/18 scale. 2B from NieR: Automata is now in chibi form with a Nendoroid figure. The next Pop Up Parade figure is Erza Scarlet from Fairy Tail. Trials of Mana is getting 3 two-packs of Bring Arts figures. TBLeague has awesome new 1/6 and 1/12 scale figures coming of Horus, Guardian of the Pharaoh and Anubis, Guardian of the Underworld. Be sure to check out all these and much more! 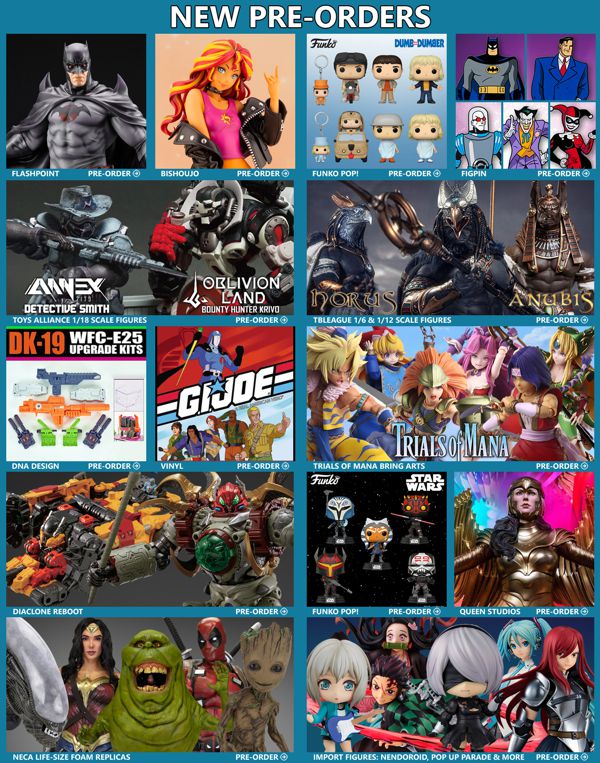 ------------
NEW ARRIVALS
------------
Tons of DC Direct figures are now in including those from the Batman: The Adventures Continue and DC Essentials lines. The Furai model kits of Drift from Transformers is here and the parts come color molded so no painting is required making this model kit ideal for beginners and experts alike. If you missed it the first time around, be sure to grab NECA's Friday the 13th Part 5 Ultimate Jason. Chucky is here! This Officially Licensed One-To-One Scale Seed of Chucky Doll is the most screen accurate Scarred Chucky Doll ever produced. Godzilla fans can now pick up the S.H.MonsterArts Godzilla figure from Godzilla Against Mechagodzilla. A bunch of War for Cybertron: Siege figures are stocked and ready to roll out including Springer, Starscream, Astrotrain and more! 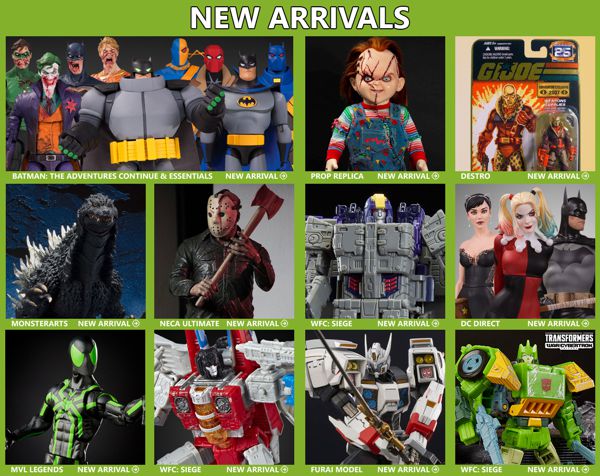