Funko Pop! Deluxe: Star Wars Battle At Echo Base Series - 6" Probe Droid, Amazon Exclusive
Posted by Dustin on August 5, 2020 at 05:53 PM CST
The Star Wars, Battle at Echo Base Funko Pop! Deluxe Series is a brand new set of exclusive combinable figures. All celebrating the 40th anniversary of The Empire Strikes Back, and the ice planet of Hoth. The Pop! Deluxe: Battle at Echo Base series will feature 6 brand new uinque figures, with combinable bases, continuing with the fourth figure in the series, 6" Probe Droid! This series will capture iconic characters and moments from the planet Hoth. The figures will feature bases that can be combined to nest together in any order you wish! When all the figures are combined, they will make for one cohesive side by side shelf display! These figures feature a level of detail not captured by original Star Wars Funko Pops! Each figure will be available for individual purchase, as they are announced. Figures will continue to be announced and made available throughout 2020. Start you Battle at Echo Base series today by securing the fourth figure, 6" Probe Droid, exclusively at AMAZON.com! 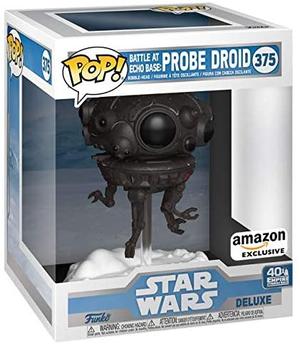