LEGO Offers Signed Maz Kanata Minifig
Posted by Jeremy on March 23, 2020 at 10:55 PM CST
If you're an autograph or LEGO minifigure collector you'll want to know that the LEGO VIP Rewards programme is currently running a sweepstake to win a limited-edition Maz Kanata minifigure signed by Arti Shah*. 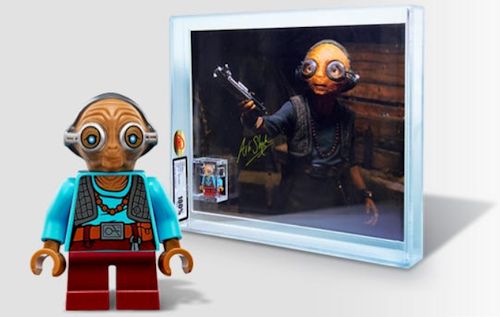 The minifigure, which can only be found in 75139 Battle on Takodana, comes in a UV resistant case that protects the minfigure and the signed print.

As per the previous sweepstakes - for a San Diego Comic Con 2012 carded Shazam! minifigure - entry will cost 50 points. Each VIP Rewards programme member is allowed a maximum of 15 entries, for a total of 750 VIP points. The sweepstakes is open until April 19th.

Only those in Canada (excluding Quebec), Estonia, France, Greece, Hungary, Republic of Ireland, Latvia, Lithuania, Luxembourg, Netherlands, Austria, Switzerland, Slovakia, Sweden, United Kingdom and the United States are eligible to enter. The offer is geo-fenced so if you visit the VIP Rewards page from outside of these countries you will not see the link.

LEGO is also running a double VIP points offer until March 31st, so get your orders in now and then spend your VIP points on Maz Kanata autograph sweepstakes.

*Arti Shah, the motion capture double was the live-action stand-in on set that allowed ILM to render in Maz Kanata, who in turn was performed by Lupita Nyong'o for all three Star Wars sequel trilogy movies. While Arti Shah's work as the pirate queen/Resistance sympathiser might be unrecognisable, her IMDB profile does note that she also played a power droid in The Force Awakens and Rogue One, though is uncredited.
SEND