LEGO UCS Star Destroyer: Pimp My Ride III
Posted by Jeremy on April 2, 2020 at 05:23 PM CST
What began as a simple exercise to spruce up the cavernous interior of the latest Ultimate Collector Series set - 75252 Imperial Star Destroyer - has evolved into a build that is as complex and detailed as the original's outer shell.

This latest set of instructions, printed in the 66th issue of Blocks Magazine, adds a south crew pit and a gap-filling bridge to the probe droid nook and north crew pit that the two previous issues have featured. 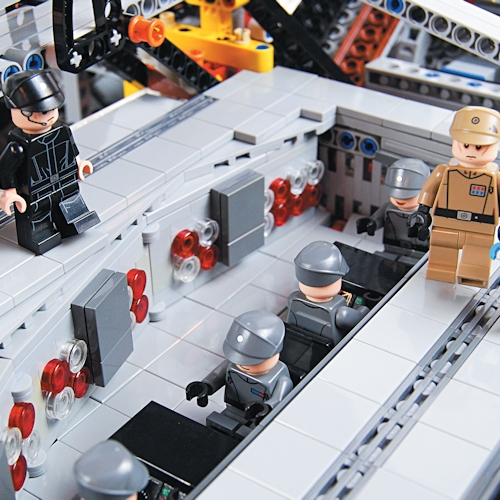 In a series of easy-to-follow photos, builder Daniel Kostanski shows how to easily add more sections to the interior, adding play value to this enormous display model. And if that's not enough Deputy Editor Graham's shows off his building skills when he takes on 75246 Death Star Cannon in the Rebuild Challenge and fails... again.

If you're down with the thought of upgrading your LEGO Star Wars sets - or even making your own custom builds - then checkout the LEGO Star Wars Customising (MOCs) area in our forums.

In next month's issue the Mod Squad will visit the other side of the Star Destroyer to add even more interior rooms. To get Blocks magazine delivered every month  ahead of the shops  visit www.blocksmag.com and check out the money-saving subscription deals available.
SEND

Recent Acquisitions - The Vintage Collection
Power Droid (Lars Homestead)
Phoenix Board #196: Next HasLab Project, Gonk Droids and Darth Maul's Disney + Series?
Is Anyone Else Out There Bothered by the Death of Uncle Owen and Aunt Beru?
K-2SO (Rogue One)
The next big ticket item?
Master Replicas Group Inc.