Retrospective's Perspective: The Original Trilogy's First DVD Release
Posted by William on September 21, 2018 at 12:00 AM CST
On this day in a galaxy far, far, away...


It seems to me that the Star Wars saga has always had a tumultuous relationship with home video. The first film didnt arrive on VHS until 1982, five years after its groundbreaking release. It only took The Empire Strikes Back & Return of the Jedi four years from their release dates; not just on VHS, but Laserdisc too. Throughout the 90s, we had plenty of re-releases, most notably the "One Last Time" box set in August of 95, courtesy of once-owned-by-Lucasfilms THX. The years 1997-2001 will be a time of infamy for Star Wars on home video. To kick off the blitz in 1997, we got the Special Edition re-releases (the less said about their changes, the better I feel), with VHS and Laserdisc releases arriving not long afterwards. The much-anticipated Episode I hit cinemas in 1999, sixteen years after the conclusion of the original trilogy, and a little more than six months after I was born. A home video release (and a Japan-exclusive Laserdisc) was inevitable of course, but in the year 2001, The Phantom Menace made history by being the very first piece of Star Wars media to be released on DVD, a format that was becoming popular with each passing year and leaving VHS in the dust. Despite this landmark, it only served fuel for the burning question asked by fans that only relied on bootlegs, Laserdisc transfers, and VCDs:

WHERE ARE THE DEEVEEDEES FOR THE ORIGINAL TRILOGY, LUCASFILM?!

In September of 2004, things would change.

As a young Padawan during the years of 1999-2004, I solely relied on the THX tapes to get my original trilogy fix. Of course, when I got to watch The Phantom Menace and Attack of the Clones after my fathers crusades to the nearby Circuit City, I only wondered where IV, V, and VI were to join I & II on the ol DVD rack. It wasnt until the year 2004 when I graduated to full-fledged Jedi Knight, in a sense. I remember the experience quite vividly: I was swinging away with an electronic Hasbro-saber in my room (typical for a 5-year-old, right?), when my mom calls me downstairs for something. That something was a wrapped box-looking package that I couldnt quite make out; a gift from my uncle. It wasnt until I returned to my upstairs bedroom that I lost my mind upon opening said package. A golden, shrink-wrapped set that contained stunning artwork of my heroes: Luke Skywalker (complete with a shredded 8-pack and a lightsaber), Captain Han Solo, Princess Leia, C-3PO and R2-D2. Next to them were the classic words that I had known all too well at that point, yet in a newer, more improved style: 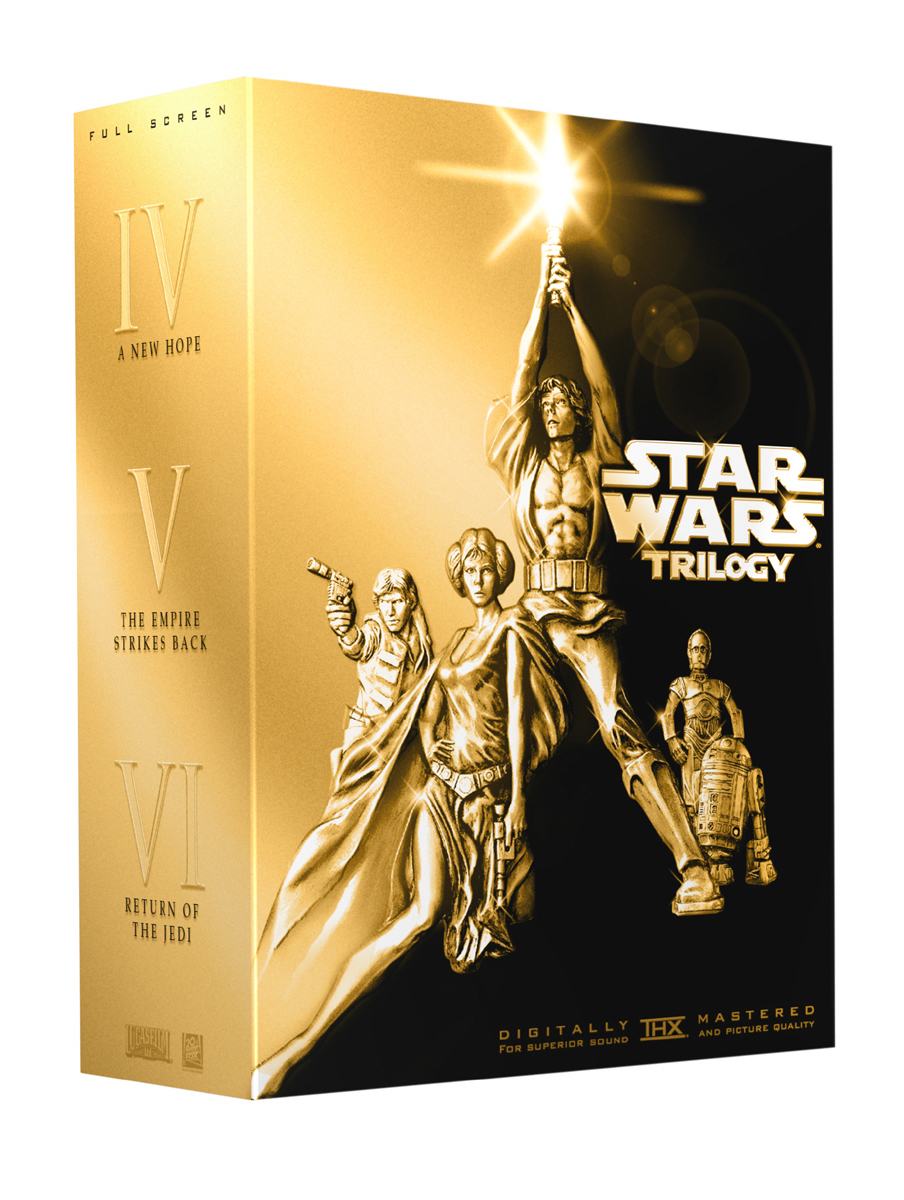 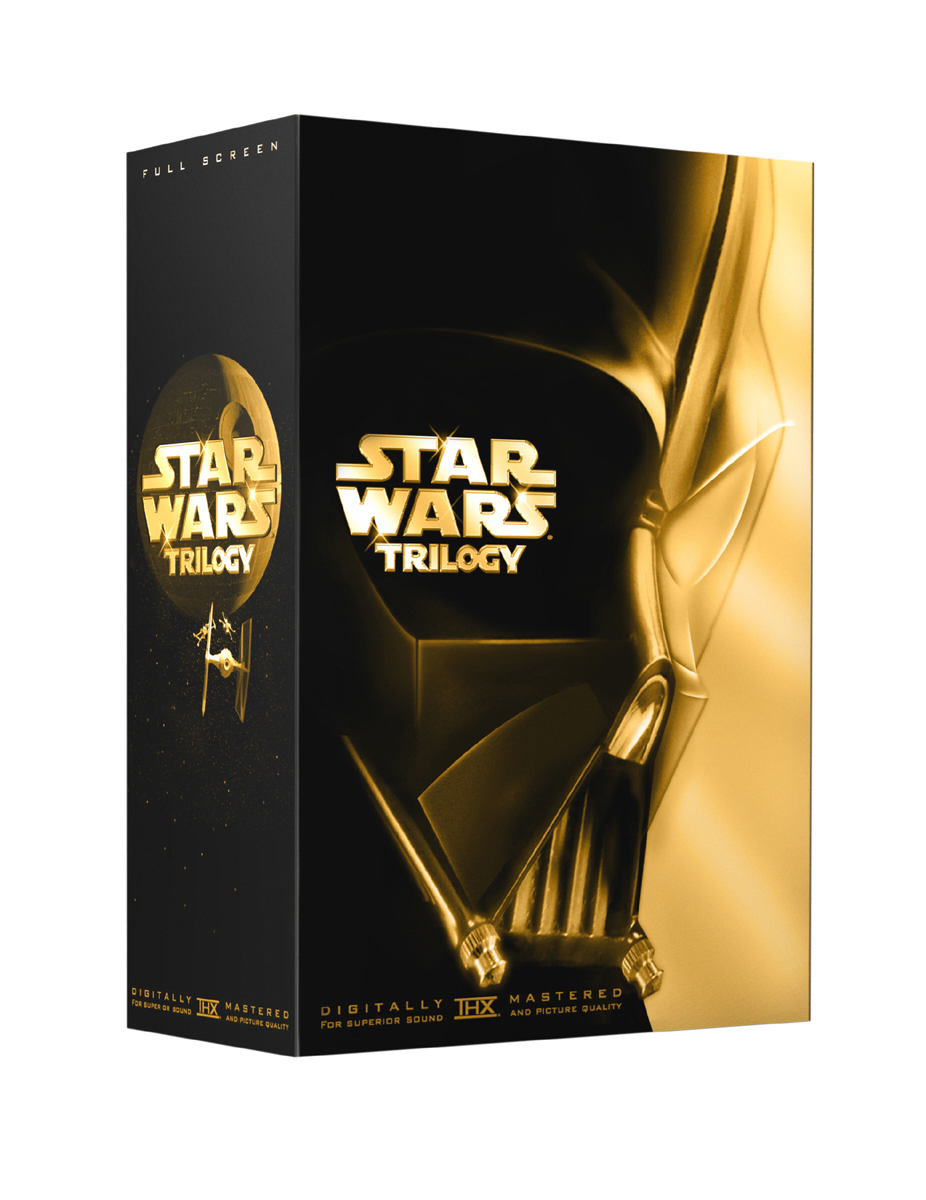 I inspected the box further and came to the second thing that distinctively caught my eye: Digitally THX Mastered (For Superior Sound and Picture Quality.) Today, I look at that banner with utmost respect, but in my childhood, a DVD with that banner on the bottom was a marker of death, and I frowned a little, knowing THAT Cavalcade trailer proceeding would not let up on my anxiety for a while. I looked at the spine. The large roman numerals proudly represented their respective movies and signified that these films were in my collection to stay, making their marks on the DVD shelf. I noticed that it said "FULL SCREEN" at the top of the spine, not comprehending (at the time) the fact that it was the inferior version compared to the widescreen release. I flipped to the other side. Darth Vaders mask seemed to be emerging from the box with its embossed visage. In his right eye, the trilogy logo was there once again, bold and proud. Enough inspection. It was time.

After getting past the plastic shield, I was met with not three, but four DVDs in one box. I pulled out all four; the artwork was vastly different from the THX tapes that I had known all too well. Main character with a lightsaber on the front, characters on the side, vehicles/set pieces in the corner, title/roman numeral in the top left. Standard formula for a great Star Wars DVD and yet Disney didnt use it for the new films, which I believe is bantha poodoo. 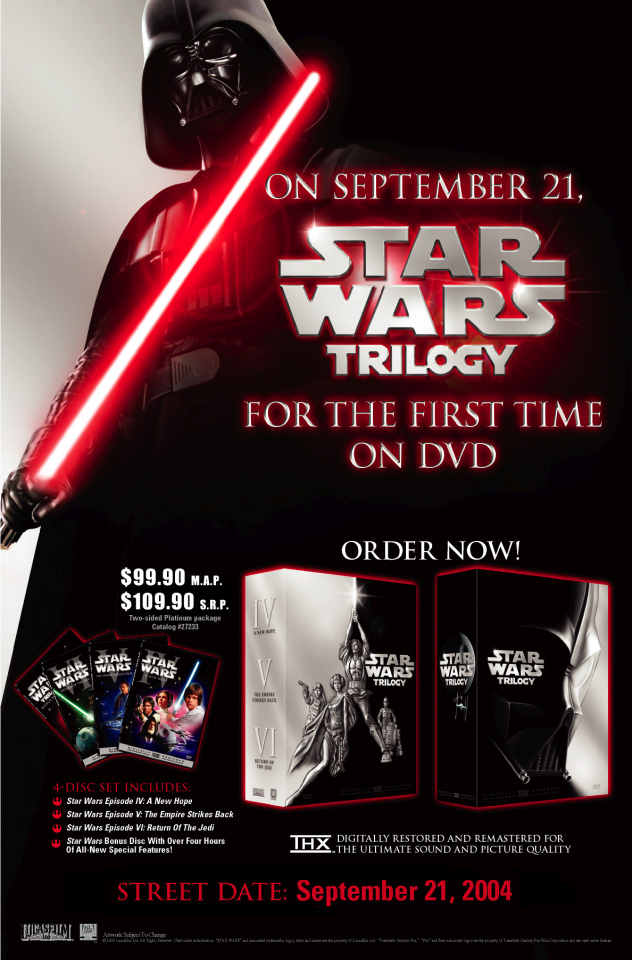 The last disc befuddled me, as it didnt have the roman numeral on the spine, yet still had the THX/Fox/Lucasfilm logos. All it had to differentiate itself from the other disc was "BONUS MATERIAL." On the front was, once again, Vaders face, yet his eyes were covered by something different: a collage of stills from the making of the films. I could make out the Return of the Jedi poster and Alec Guinness relaxing in the Tatooine desert. On the back was Luke Skywalker himself, standing next to some guy with a beard and wearing plaid. Since I had no idea how the concept of time worked, I did not know that I was staring at the Maker himself. This was surprisingly the first disc I put in my small yet capable DVD player. 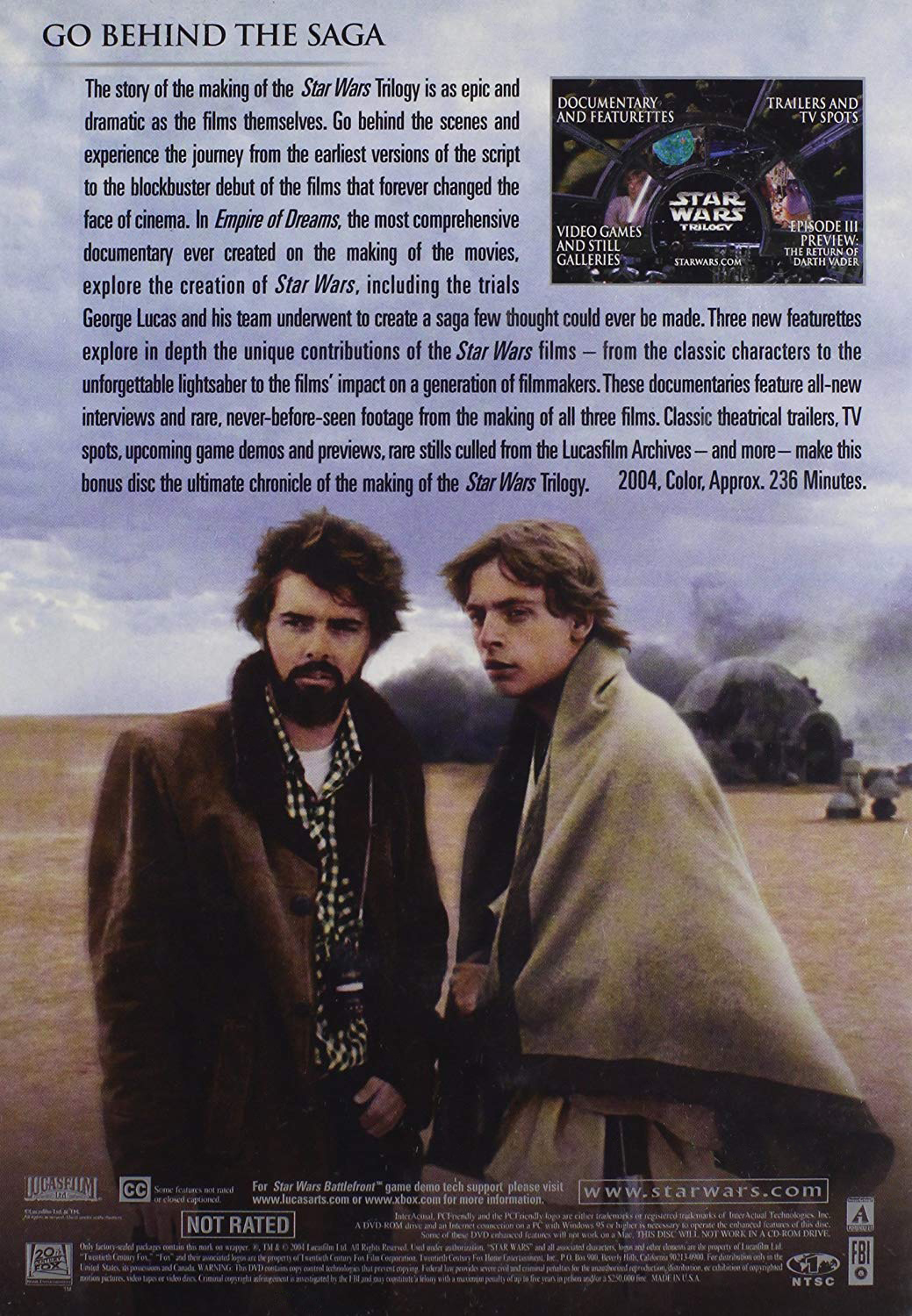 This disc was and still is very special to me for a couple of reasons. For one, it was how I first discovered that Episode III was coming to theaters, thanks to an exclusive featurette on the disc titled The Return of Darth Vader. The other reasonerr, reasons, happened to be the documentaries and featurettes. A history lesson from George Lucas, Mark Hamill, Ben Burtt and others on the creation of the lightsaber. A demo for Star Wars Battlefront (which could only be played on an original Xbox.) Fascinating photos from the production of the trilogy. A preview for the upcoming Episode III video game for PS2 and Xbox (I ended up with the awesome GBA version.) A two-and-a-half-hour-long story of how Star Wars came to be and the impact it has had on the world. This documentary also put a particular spotlight on Lucass struggles making the first film, which got so bad that he almost quit mid-production due to the stress it was giving him. It not only solidified my love for Star Wars, but for filmmaking in general. 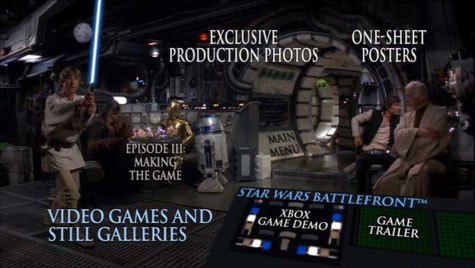 Digesting the content on this disc took a while for me, but I managed to get around to watching the new versions of the films. They had never looked better. Most of the changes I had spotted right away, like Episode IVs CGI Millennium Falcon and X-Wings, Ian McDiarmids Emperor in Episode V, the new Ewok celebration song and Hayden Christensens Force ghost at the end of Episode VI. Other subtle changes took years for me to spot, like Temuera Morrison replacing Jason Wingreen as the voice of Boba Fett. When I discovered the world of the internet for the first time a year later, it surprised me to learn that other fans didnt sit well with these changes and demanded that the original, pre-1997 versions be released. In 2006, thats what happened. Well, sort of. I missed out on these releases as LEGO Star Wars II was the new hotness at the time, and I later found that they were just low-quality letterboxed transfers of the 1993 Laserdiscs. But hey, Harmy's Despecialized versions are a thing!

Whatever version of the films you prefer, there is no denying that the 2004 Trilogy DVD set was a monumental step for Star Wars. It may not have been the release we wanted, but it was the release we sorely needed. As for me, I stuck with these versions and relied on them near-religiously until 2016, when I finally caved and bought the Complete Saga's Blu-ray set. If that doesnt say a lot as to how awesome this release was, then Im not entirely sure what will.
SEND