DK: LEGO Star Wars Ideas Book Review
Posted by Jeremy on August 28, 2018 at 03:21 PM CST
The concept of combining LEGO and print is nothing new - the first publication by The LEGO Group was LEGO Idea Book (set number 238), printed in 1966 by LEGO Books. It was a photograph collection of instructions that took the reader through the steps to construct simple models.

Since then both LEGO, DK and a number of other publishers have helped inspire builders to think out of the box by developing new techniques and designs of their own through a number of books - but the area of LEGO Star Wars has been left relatively untouched. It wasn't until 2013 when Build Your Own Galaxy: The Big Unofficial Builder's Book was released that LEGO fans had something to reference for new ideas.

On September 4th that's about to change again when DK releases their LEGO Star Wars Ideas Book, and Rebelscum was given an advance copy for review. But before we reflect on our thoughts here is what DK has to say about their new publication:

"Find a galaxy full of LEGO Star Wars ideas to buildfrom activities and art, games and challenges, to practical makes and your very own inventions!

This book features 200 imaginative play and building ideas, from LEGO projects that take just a few minutes and a handful of bricks, to builds to keep you occupied for hours. Set up a game of LEGO Star Wars skittles, create a pencil pot shaped like your favorite Sith or Jedi, build a fleet of tiny TIEs, design Darth Vaders family tree, and customize a podracer. Challenge a friend to take on a rathtar, mix up your minifigures, stage your favorite movie battle scene with LEGO Star Wars bricks  and much, much more! LEGO Star Wars Ideas Book is packed with a family friendly range of activities to inspire every LEGO Star Wars fan. What will you build?"

That's a big, fat loaded question, and thankfully this book is big and fat, and loaded with great ideas. 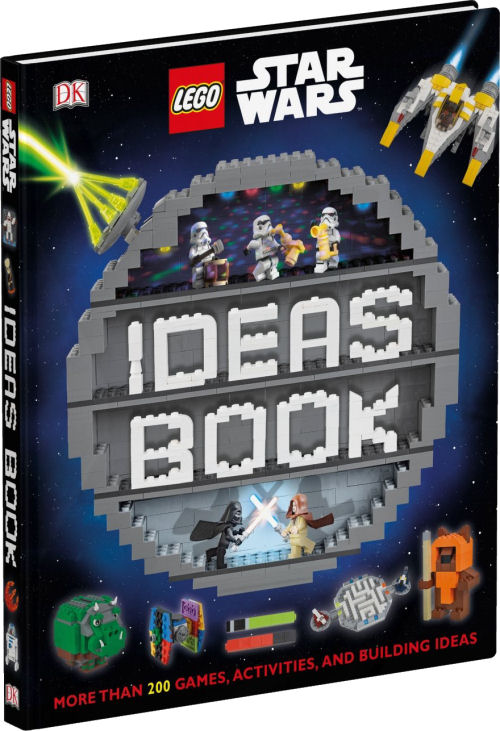 Inside the hardbound covers is plethora of building fun that encourages LEGO brick users to take a step away from the more traditional build-by-instructions that Star Wars fans have been spoon fed since 1999. From start to finish the LEGO Star Wars Ideas Book is packed with an array of builds - including vignettes and dioramas, mini vehicles, interesting character renditions, alternate build suggestions and games.

The book opens up with a guide to the variety of LEGO bricks and terminology that will be used throughout, and a soft introduction to the contents. And then, unlike most crafting, modelling or building books (of any genre) the LEGO Star Wars Ideas Book it doesn't start simple and ramp up to more complicated builds. There's no baby-stepping here, and the material contained inside it is a motley array that will keep readers turning the pages to find out what's next. (And hidden away there's a couple of cute Easter Eggs that will put a smile on the faces of of die-hard Star Wars fans.) 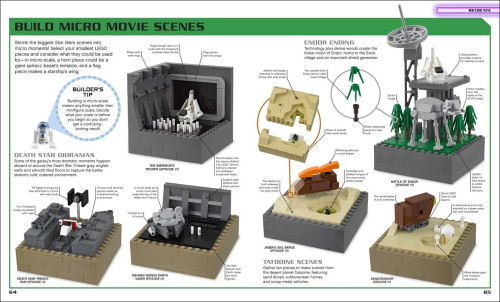 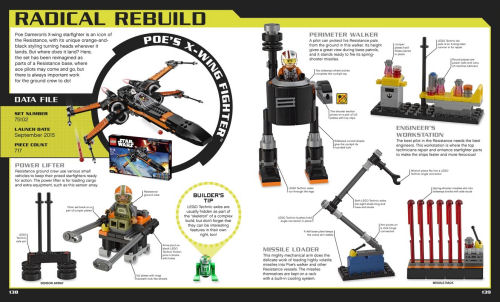 And there is nothing within that is so difficult that a youngling couldn't master - the target age group is 7 to 10 years after all. Don't expect a series of step-by-step lesson though because this book is about inspiring not instructing, and shares out tips and tricks to help LEGO fans develop their own skills.

And to prove it Rebelscum turned the book over to two budding brick builders - OB1 (aka Son of LEGOscum) and Luke (yes, really!) - to road test.

After three hours of building they produced their own creations: (from left to right) a launch pad complete with anti-Separtist seeking rocket, a micro Ewok Village, an X-wing pilot training simulator and a space pirate swoop bike!

Going in I was expecting something different though. When I first broached the concept of a guide to building LEGO Star Wars accessories for adding extra detail to MOCs to DK, I had been reading The Lego Ideas Book which they had just published and my head was full of thoughts of building intricate Mos Eisley dioramas, snow-bound Rebel bases and expansive Imperial hanger displays. There are plenty of examples of how to greebly up your displays however, so don't go discounting the book on my initial assumption.

But looking back it's easy to see that a book full of vaporators, brick built dianogas and laser turrets wasn't going to anywhere near as colourful or attention grabbing as it needed to be. As much as I'd like to have a reference to increasing the depth to my builds DK's vision was far superior and they've come up with an awesome collection of constructions for kids and grown-ups to enjoy.

Special thanks to the crew at DK Australia for providing Rebelscum with a copy of this book.
SEND