LEGO: Star Wars Turns Four Plus
Posted by Jeremy on March 8, 2019 at 02:07 AM CST
Cast your mind back two decades and conjour up the blockiness of the original LEGO Star Wars sets that were released in 1999. Chunky and square, they were like an Eastern Bloc breakfast cereal, but - just like the Iron Wall - time saw big changes to the skills of the LEGO Star Wars design team, the assortment of pieces that they could use and the expectations of their consumer audience.

As the theme evolved, the complexity and number of pieces increased so that most sets bearing the LEGO Star Wars logo had an entry-level skill requirement that meant most builders' entry ages were heading towards double digits.

With an estimated 11 to 13 million four to seven year olds in the US alone, there was an untapped market and LEGO, with the new LEGO Star Wars 4+ line, has found a way to inspire a new Star Wars generation - just like they did 20 years ago. 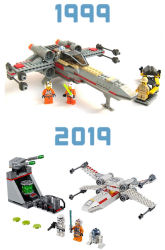 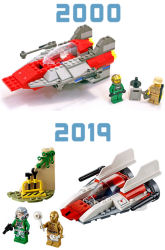 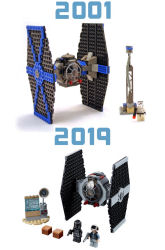 Intitially launched as the Bricks & More subtheme in 2009, and then rebranded as Junior in 2014, the new 4+ title continues to act as a transition from DUPLO to the regular System-scale sets.

Billed by LEGO as "designed to build confidence, age appropriate for 4-7 year-old builders, pre-packed bags, beginners elements, and simple guides to build and play" we decided to put their claim to the test and recruited our youngest reader - Ben (aged 4) - to see if his skills were up to the job of building these three brand new sets.

Kids are much luckier these days; the same sets that had their releases spread over three years have been made available in one drop. And so in order of increasing complexity, Ben spent a couple of days assembling 75237 TIE Fighter Attack and 75277 Rebel A-Wing Starfighter, before moving on to 75235 X-Wing Starfighter Trench Run.


As luck would have it Ben arrived wearing a First Order Stormtrooper costume and decided that the 4+ TIE Fighter Attack (75237) would be the first one he would tackle. The punchy graphics on the box appealed to Ben, who was keen to find out what the new wing panel pieces were like. The chunky pieces made the set a fairly easy one to build, which Ben was able to do without any help. And there were enough small pieces to give the model detail, but not so much that it became difficult for our young builder's still-developing fine motor skills - and this helped to keep his attention for the hour it took him to put the set together. 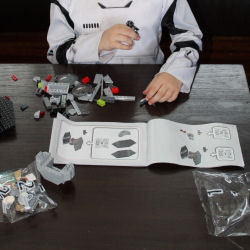 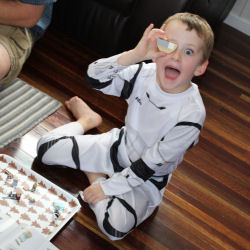 What Ben didn't know was that the cockpit was a single element too, which made the spaceship easy to assemble and the single piece panels made the finished model surprisingly sturdy - even in the hands of a 4+ year old. His only sticking point on this set - which he described as "easy to build" and "really fun" - was orientating the printed round tile on the outside of the wing panel. After letting him ponder the instructions for a few minutes, gentle coaching helped him to work out how the element should be placed. 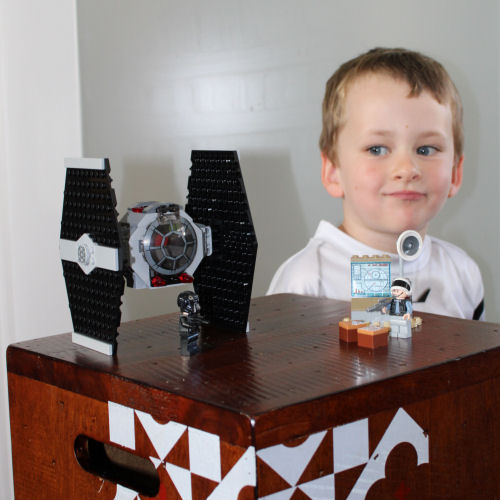 Once completed, Ben pushed the structural integrity of the set to its limits with a series of power dives and banked curves, and the connector studs helped to keep the wing panels where they should be. The small controlcenter accessroy and Rebel soldier didn't stand a chance.

This set is available now at Target, Walmart and LEGO's shop@home, and has an RRP of $19.99.


The lure of red bricks was too much for Ben to handle, and the next set he selected was Rebel A-Wing Starfighter (75277), with its vegetation-draped service station and two minifigs.

Again, the big elements - particularly the single-piece base of the ship - made it an easy build for small hands and it took Ben an hour to put this 62 piece nippy, delta-shaped starfighter and small workshop together. This set was a little easier to build than the previous set and looking back it would have been a better point-of-entry for our 4+ builder. 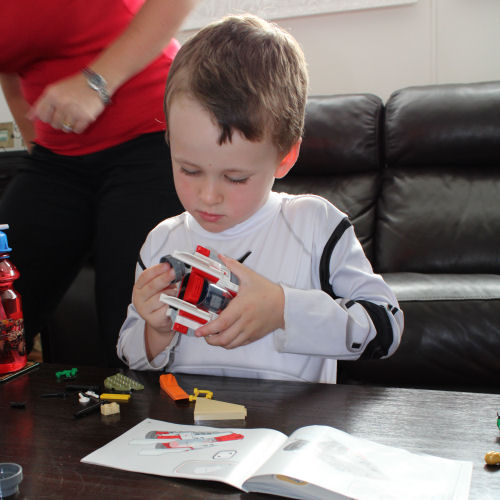 Like the rest of the Juniors/4+ subtheme, the high big:little piece ratio meant it was easy for Ben to put together, though he did have to get help from his Mum because he was having trouble interpretting the instructions. The number of smaller pieces was just enough to give the set the right amount of detail to keep Ben engaged. 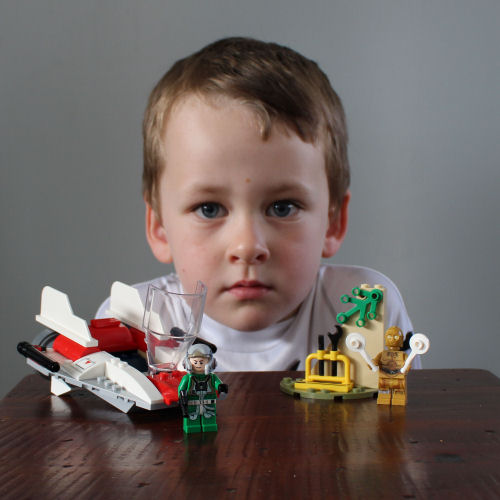 The inclusion of the C-3PO minifigure and the tool bench encouraged Ben to play out a short hanger scene before he started running around the room, making rocket engine noises and Pew-pews. The opportunity to swoosh showed off the fact that the size and shape of the A-Wing is perfect for a small child's hand.


Saving the largest set for last, and donning his Poe Dameron flight suit costume for the occasion, Ben finished off the 4+ trilogy with the 132 piece 75235 X-Wing Starfighter Trench Run set.

Comparing it with the original 1999 release, with 250 pieces, the 4+ version has pretty close to half the parts. While the chunky, simplified elements do lend credence to these designs being made for young builders, the deficit in the detailing is a shame. That said the addition of a Death Star turbo laser turrent adds a factor of play that can only be measured in smiles. And they're more valuable than any bricks per dollar calculation.

Ben got stuck into this set with gusto, though its larger size meant that his patience and ability to squat-build were going to bve put to the test. The first section of the build sees the construction of the turret, which, as his concentration began to lapse and he started getting silly, he opted for an impromptu break. After a quick run around the room, with his TIE Fighter and A-Wing sets engaged in a dogfight to the death at the end of his arms, he soon settled down again. 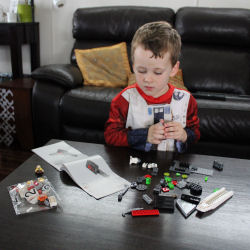 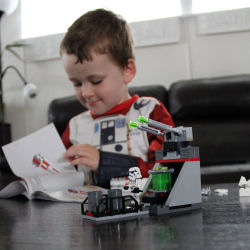 Fully enjoying the effort he put into assembling his favourite Star Wars ship, he did find that the instructions were a little overwhelming. Perhaps it was the thickness of the booklet or the knowlegde that he would have to concentrate for longer made him figgity after an hour or so. 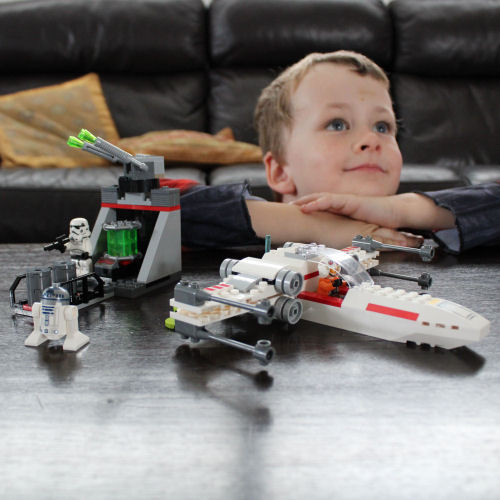 A murmured comment picked up during the build expressed Ben's concern that the instructions should easier to follow. Taking a moment to ponder the lad's wise words it raises the question "why didn't LEGO simplify the instructions as well?" Ben said he thought some puzzeles or comics in the booklet would have been fun too.

If this set interests the younger builders in your unit, or even yourself, head to Walmart, Target or LEGO's online shop to pick up yours for $29.99.


Any of these new LEGO Star Wars 4+ sets are a great entry point that have quick start elements for young builders to get to grips with and come with a small scene feature and an extra minifigure for play - making for an awesome introduction into the LEGO Star Wars galaxy, so if you have a son or daughter, nieces or nephews or even young grand-children then look no further.

From box to table to play, these sets take less time to build than it takes C-3PO to get to the point!

Rebelscum would like to extend a special thank you to Ben G, and his parents Matt and Kath, for helping us put these bricks together and sharing his thoughts on the experience. Enjoy your new LEGO sets Ben!
SEND