LEGO: The Legend Of Threepio's Gold
Posted by Jeremy on March 13, 2019 at 08:56 PM CST
It was 2007 - the 30 year anniversary of the first Star Wars movie - when a giveaway for five 14 carats, solid gold C-3PO minifigures was innocuously slipped into the LEGO Magazine that was issued in March/April 2007. The announcement, printed on the back cover page of the magazine, teased that details on how to win this prize would be forthcoming in the next issue of the LEGO Magazine. 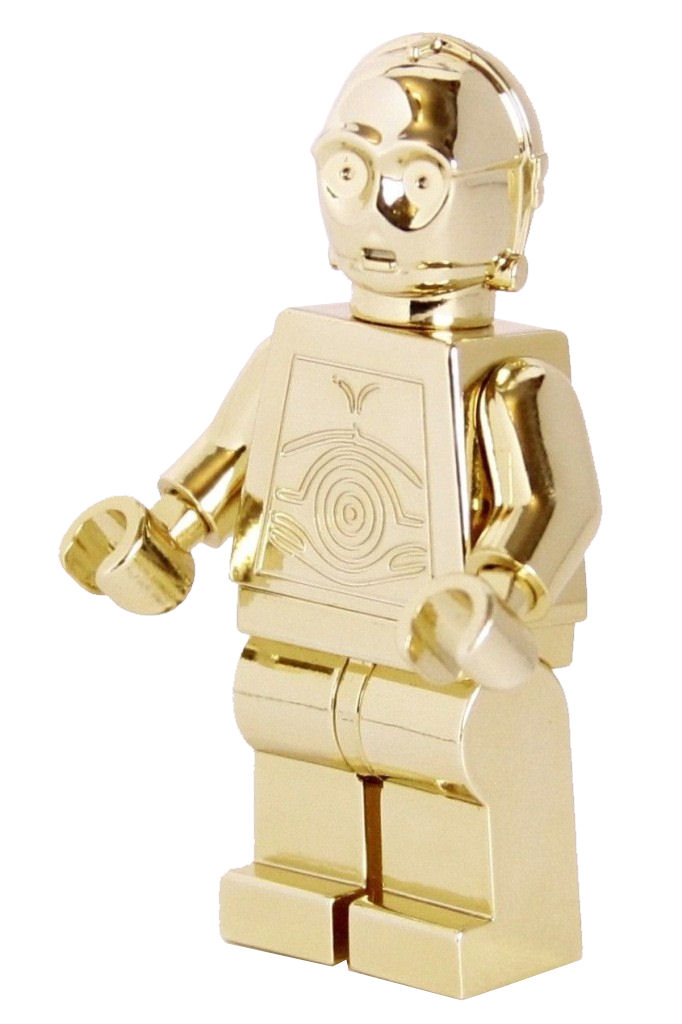 In the May/June issue the terms of the giveaway were laid out - all you had to do to enter was send a letter or postcard with your name, age, address and phone number to a PO box in Enfield, Connecticut (where the US offices of LEGO were situated) and sit back and wait until December 2007 when the randomly selected winners would be contacted. The following two issues issue (July/August and September/October) included reminders that the sweepstakes were still on.

Running concurrently, and also marking the 30th anniversary of Star Wars, was a pack-in giveaway for a polybagged, vac-metalled plastic version of the C-3PO minifigure. This Charlie and the Chocolate Factory luck-of-the-draw prize caused a frenzy that saw collectors taking weighing scales to toy aisles in the hope of detecting the 3 to 4 gram difference that this minifigure would add to a boxed set's weight!

"THE HUNT IS ON! For a limited time only, special edition gold metallized C-3PO minifigures have been hidden in 10,000 random boxes from the new 2007 LEGO Star Wars collection. Will your next set be one of the lucky winners?"

The offer for the plastic protocol droid was only run in the US and Canada (as the packed-in version), and Europe with an unknown distribution mechanism. However in Australia, where laws about sweepstakes prevented LEGO from randomly including them in the 2007 collection, they were given away as part of a mail-in through the countries LEGO Magazine. Only a hundred of these were made, making them the second rarest version of the C-3PO minifigure. 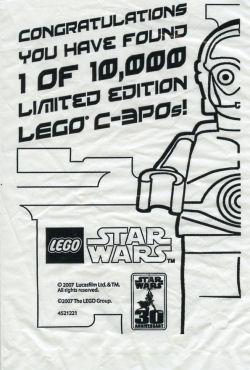 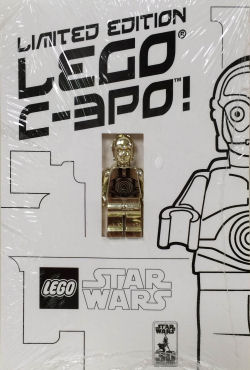 It's a matter of public record that Andrew Hoffmann, Christopher Giancola, Elizabeth Jacome, Jason Masey and Chris Melchin took possession of over a thousand dollars worth of gold late in 2007 (though there names were announced in the Jan/Feb 2008 edition of the LEGO Magazine).

Nearly a decade later it emerged that the Australian minifig (left) was different to the one released in North America (right), creating three variants - polybagged North American, polybagged European and carded Australian - and a new hunting frenzy. 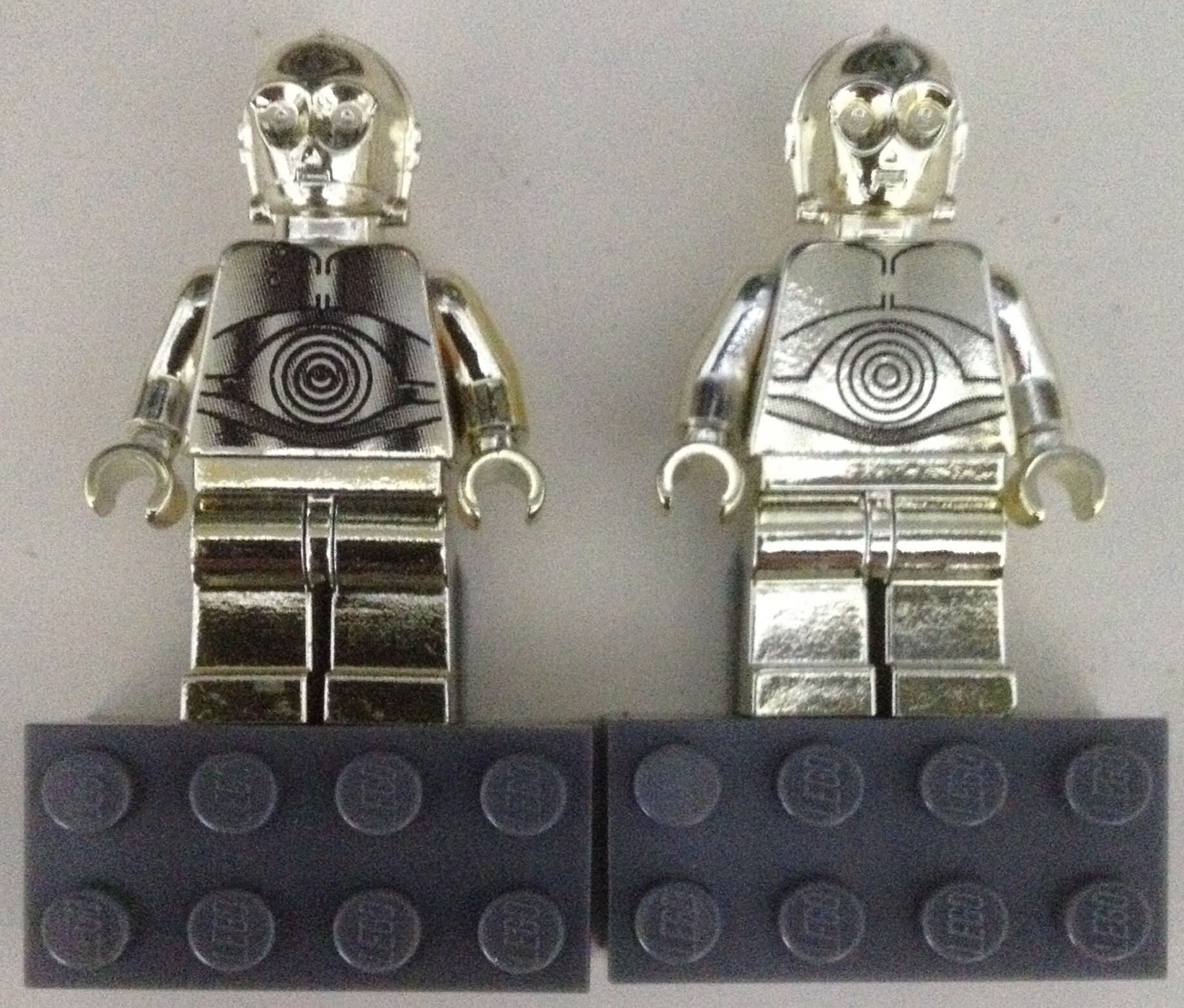 For minifigure collectors, like the guys at minifigpriceguide.com, both these limited and considerably-more limited edition minifigures have become holy grails. Over time a couple of the owners have outed themselves - no doubt being contacted by hundreds of collectors with purchase enquiries as a result - but until a few days ago none have come up for public sale, until now.

The asking price is obviously ludicrous - five minutes of simple research tells us that the minifigure would weigh a calculated 57 grams (a plastic/ABS C-3PO minifigure is 3 grams and gold is x20 heavier than plastic) and at today's gold value the material value is US$1400.

But then there is the intrinsic value that comes with it being a) extremely rare, b) a licensed Star Wars product and c) made by a globally identifiable brand. Community estimates put the framed minifigure's value at a significantly more conservative US$25,000. While the auction is nice to look at we all have to be honest and accept that it won;t sell, so a new becnhmark price won't be set, and all it really does is serve to draw attention to the other items the seller has listed.

Meanwhile the more common polybagged version can be bought for US$500 to $600 and the hard-to-find Australian giveaway will set you back triple that.

All photo credits go to minifigpriceguide.com who have a series of well-researched articles on all three of these exclusive minifigures.
SEND