The Art of (LEGO) Star Wars: macroLEGOuniverse
Posted by Jeremy on November 16, 2019 at 10:58 PM CST
It's hard to imagine a time when Star Wars wasn't part of mass culture. It's even more fantastical to think that our beloved space opera wasn't even on the pop culture radar when Marvel Comics artist Howard Chaykin, commissioned by a fledgling Lucasfilm (known as Star Wars Corp at the time), painted the very first Star Wars poster as part of a guerilla marketing campaign to help promote an indie sci-fli flick. The poster, known then as Star Wars Corp. Poster 1" but today called "The Chakykin", was sold at San Diego Comic Con in 1976 for a mere $1.75 and is one of the most famous posters in movie history.

Jump forward four decades and hundreds of theatrical posters later, to an age when a proliferation of graphical skills has given fans a grassroots means of showing off their talents and to help to the Star Wars franchise in their own way. The differing mediums that gifted Star Wars enthusiasts are able to employee to express their passion is impressive as they are creative, and none more so than Daniel Jamieson - aka macroLEGOuniverse - who has been producing incredibly accurate and high quality renditions of Star Wars movie posters using nothing more than LEGO as his milieu.

Daniel came across the first LEGO Star Wars movie posters when they were released as part of a LEGO promotion during Star Wars Celebration Anaheim in April, 2015. To mark the return of Star Wars to the big screen in the form of The Force Awakens - which was released in December of the same year - LEGO transformed the Special Edition and Prequel Trilogy that Drew Struzan had painted decades previously into minifigure versions. 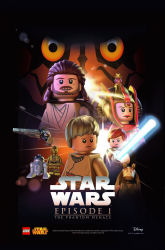 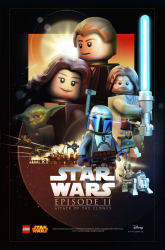 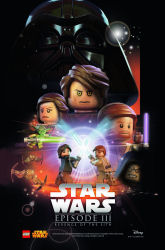 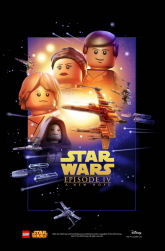 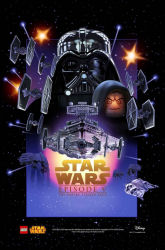 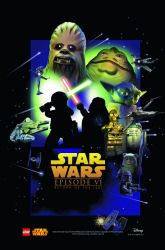 Later, in 2016, as part of the May The 4th Be With You celebrations LEGO released a version of The Force Awakens movie poster as a gift with purchase. Since then there have been no further follow ups, despite three (and soon to be four) new Star Wars movies making their debut.

Recognising that there was more work to be done, Daniel stepped forward. But the route wasn't as linear as you'd expect.

Amazingly, Daniel's big break didn't come through his LEGO Star Wars movie posters creations. It was his Snowtrooper Attack stop-motion movie submission for the Golden Brickie Awards, a competition run by LEGO UK that invited families to make their own original LEGO Star Wars creations, in 2014. Daniel won the Overall Prize and with it a years supply of LEGO bricks. This, he says "really got things going" in terms of the scale and scope of models he could build. 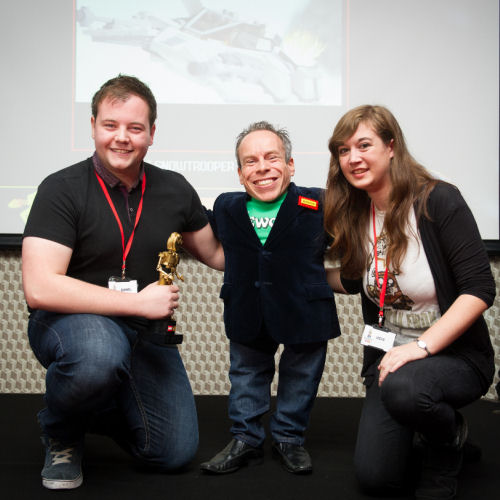 His first poster was The Force Awakens which he made for his own enjoyment and to add a new dimension to what he was posting on social media. The poster was a steep learning curve and Daniel found himself learning a whole raft of new skills.

"Photographing and digital modelling the featured characters was just the foundation. Recreating the colour and brush style across these posters was the most important element, and after that, the next most difficult and - often unnoticed - part was recreating all the typography to be accurate in detail and sharp in resolution."

Understandably proud of his effort he posted it to his Facebook and Instagram pages. This decision to go social proved to be a wise one because his work was noticed by LEGO, who reposted his The Force Awakens poster on their Facebook page. This helped him get new followers on his own social media channels, as well as bring his work to the mainstream LEGO/Star Wars blogosphere. 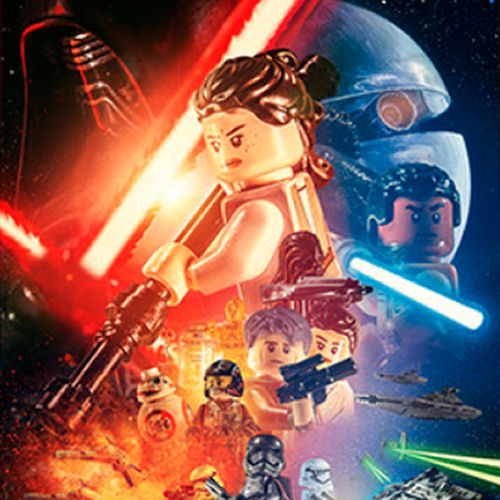 Loving the vibe that Lucasfilm and Disney was spreading around for the debut of their first Star Wars Story - Rogue One - which featured heavily at Star Wars Celebration Europe III in 2016, Daniel's next project would be the movie's teaser poster. This was his first attempt at digitally modelling elements, such as the Death Star, with real LEGO elements. This lead on to Daniel's first piece of commercial work - a commission by the then-editor of Blocks Magazine, Rob Paton, who asked Daniel to provide some still shots and an alternate cover based on the theatrical poster for the their January 2017 issue, which covered the LEGO Rogue One sets. 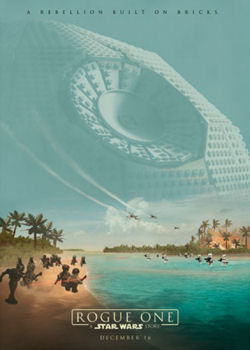 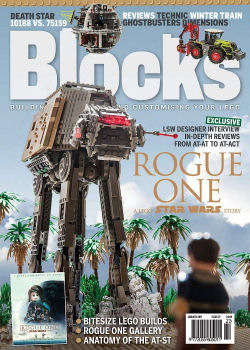 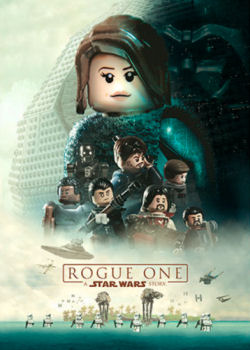 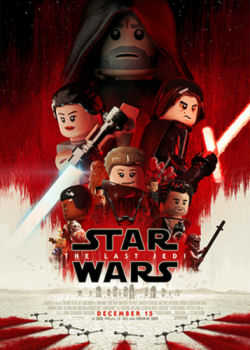 When the poster for The Last Jedi was released Daniel knew he had to give it his special treatment. "I thought the artwork was actually great, really striking red and white symmetry, so wanted to recreate that" he shared with Rebelscum, but he felt that the Solo: A Star Wars Story posters were pretty standard, "and making a LEGO version would have felt like just going through the motions, and seemed like what any followers I had might have expected, so to go against that I wanted to make what would be fun, and that was three at once" so Daniel chose the Original Trilogy movies as his next jumping off point.

Wanting to avoid redoing Struzan's work, and still make an attempt at the classic artworks that were so iconic, Daniel decided to look at other artists who had used LEGO as their palette. Noting that some attempts had already been made at the original theatrical release poster which Tom Jung painted, Daniel was inspired to look to the work of Tom Chantrell, whose more dynamic art would be better portrayed in LEGO form. Coincidentally, LEGO chose to depict the Chantrell poster as part of their LEGO Star Wars 20th Anniversary display at Star Wars Celebration Chicago earlier this year.

Looking for his next project, Daniel decided that for his version of The Empire Strikes Back movie poster he would create a facsimile of the dream state work that Roger Kastel had provided in his 1980 "Gone With The Wind"-style theatrical release poster. Daniel's third project was, needless to say, the Return of the Jedi theatrical release poster and, because it featured a collage of characters, he chose the underrated Japanese artist Kazuhiko Sano's "B Style" work to replicate. 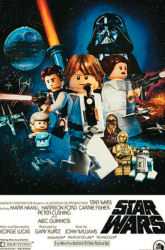 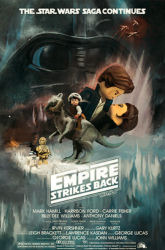 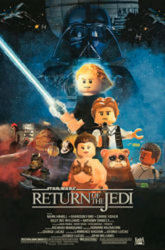 With all the attention Daniel has received since his break out his only follow-up commissioned work was to produce a cover illustration for Brick Fanatics Magazine's big LEGO Star Wars 20th Anniverssary edition in May, 2019, and - amazingly - he has never done any work for LEGO. Asked where he'd like to take his skills Daniel told us "My goal right now is just to get some form of LEGO Star Wars poster made for LEGO, either for VIPs or as a promotional giveaway." so if anyone from LEGO is reading this feel free to contact Daniel.

Once the reveal of the poster for the next Star Wars movie - The Rise of Skywalker - took place Daniel got to work. After an estimated 50 hours worth pf photography, digital manipulation, blending and editing Daniel shared his LEGO version of the final poster in the Skywalker Saga. 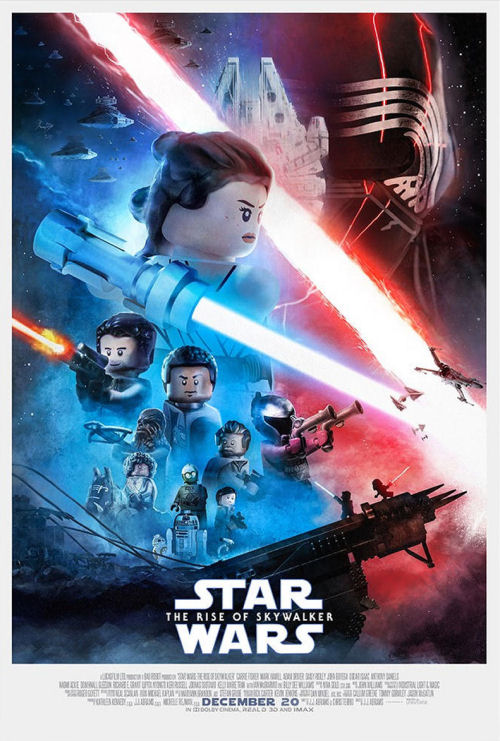 Having recovered from his Herculean effort to finish the poster to the standards his fans expect - and hopes that one day LEGO, Lucasfilm or Disney will take note of - Daniel took time to explain the creation process to us:

"All of my poster reworks are a mix of photographing, rendering and painting in Photoshop. Photographing figures is the best way to get an image of a character that looks believable, but sometimes you need a character that hasn't been released yet in LEGO form or maybe needs a pose that isn't possible in photography. For that I would use Mecabricks, an online LEGO building platform to create or edit a character model that can be furtherr edited in Blender. For example, in the Return of the Jedi poster, Luke's hair has a distinctive swish from the wind that wouldn't exist on any figure, so the best way to achieve this effect was to manipulate the hair on a digital model of Luke and drag out the surface of the hairpiece to be accurate, then fix up with Photoshop." 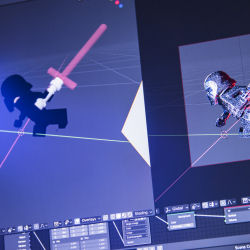 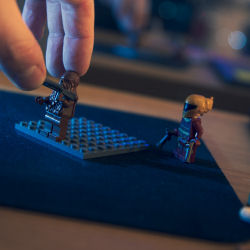 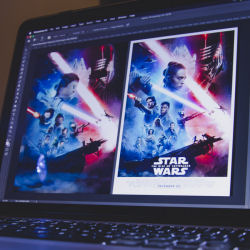 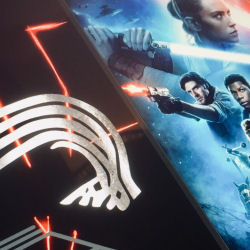 "Generally the process is to arrange all the characters in the correct positions on the poster, blur and paint them with Photoshop to look accurate, then build up any background and graphic design elements as accurately as possible versus the original poster, and work it all together. In the Rogue One Teaser I used the sand and sea from the original poster in my poster as an experiment to include some realism, which looked good, but I wouldn't want to do that going forward, it's best to remake everything, not only for a more pure effort but also so that it's very sharp when printed. All of the original trilogy posters were completely redone. I would also remake all the text on the posters, so again they would be sharp and accurate when printed."

Fans of LEGO Star Wars toys and Star Wars poster collectors who want own copies of Daniels's work can visit his online shop - macrolegouniverse.com - where he sells both A4 and A3 prints of his posters. For those interested in adding the collection of Star Wars movie posters that LEGO have released to date, check eBay.com where copies regularly turn up for around $10.
SEND