LEGO: The World Of BB-8
Posted by Jeremy on December 6, 2018 at 07:24 PM CST
Fans of Star Wars have always had a soft spot for the droids of the galaxy - the inquisitiveness of R2-D2, the ineptitude of Separatist battle droids, L3-37's no-nonsense approach and the admirably low centre of gravity of the Gonk droid are great examples. But perhaps one droid has captured our attention more than any other.

It was November 28th, 2014 when BB-8 made his debut in the trailer to The Force Awakens, and since then he's secured a place in the Star Wars pantheon by appearing in two (plus one upcoming) Star Wars movies, two TV series, a video game, any number of animated shorts, two (and an upcoming) novelisations and a comic series.

is none other than the subject of this deep dive into the LEGO BB-8 builds. 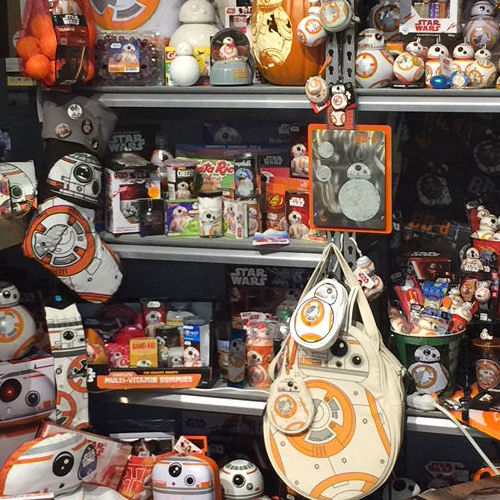 Photo credit: Rancho Obi-Wan
Making his first appearance in a LEGO set, the BB-8 droid figure could be purchased in 75102 Poe's X-Wing Fighter in 2015. Since then this rolly-polly character has arrived in nine more sets - including one that is entirely in the first person (or first droid as the case may be) - a watch, an advent calendar, as two brick-built versions, a key chain and an LED torch.

The focus of this review are those builds that are BB-8, rather than the BB-8 as an ancillary character in the persona dramatis of the set.

The first of which is the last Star Wars Bricktober Make & Take held at branches of Toys "R" Us in the US, and later followed up by a overseas tour in Canada, France, Germany and the United Kingdom.

The simple and free Make & Take events invited children to collect the required 39 pieces and a set of instructions from totes set up in a designated build area, where they could make the set. And because LEGO provided the pieces to Toys "R" Us at no cost, attendees could take their build home with them.


The completed model was very simple - a basic and blocky structure with some round plates on the side to create the illusion of BB-8's round body, and a dome on top for the head unit. Without any printed pieces or stickers the completed model wasn't a particularly exciting set for collectors but a great chance for children to own a BB-8 that was a bit bigger than the pea-sized one that came with the available LEGO sets.

To add this set to your collection you can use the part list in the instructions above and Bricklink to buy up the parts for around $5, or head over to eBay, where it is available - with original instructions and baggie - for around $9.

The second BB-8 offering fromLEGO was a Gift With Purchase (GWP) during the May The 4th Be With You 2018 celebrations that LEGO held in their brand stores in the USA. 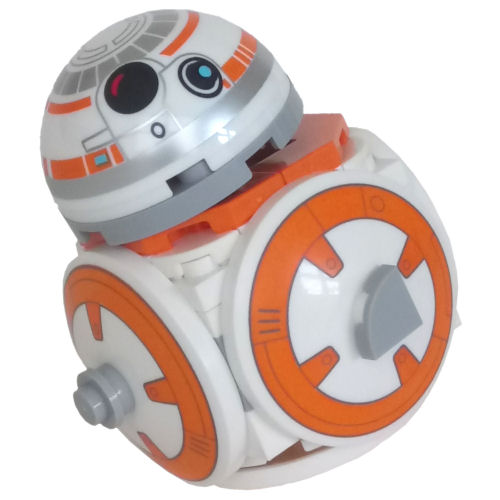 Though the main draw was the new 75181 Y-Wing Starfighter, its $200 price tag didn't compare to the free (with $75 LEGO Star Wars purchase) brick-built 40288 BB-8 polybag. The dished plates, printed details and overall correctness of this build had kids entranced, and those with the previous year's Toys "R" Us version soon had a new favourite.

Only officially available at LEGO brand stores during the May 4th (through 6th) weekend, it isn't a hard one to add to a collection with both Bricklink and eBay offering them at $9 and $25 respectively.

Though it arrived amidst a certain amount of consternation eminating from the AFOL crowd, it proved to be popular and those who wanted it branded with the Ultimate Collector's Series badge soon - because of the complexity of the build, display stand and data plate - toned their murmurings down to a background level and got on with the build. 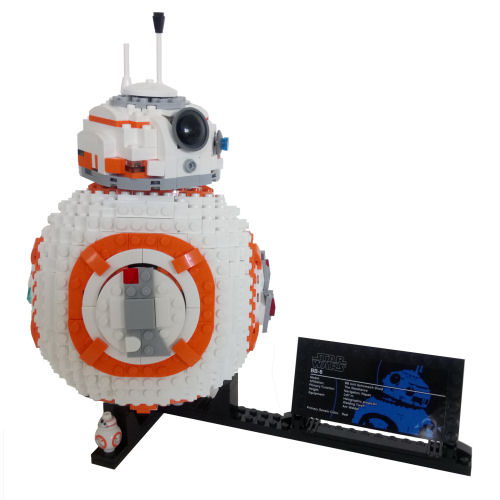 However the UCS reference isn't an easy one to escape because if you've been into LEGO Star Wars building for long enough you will have come across three previous sets that are akin to this set: the 7194 Yoda and 10018 Darth Maul busts and 10225 R2-D2 statue.

If you suffered through the first two aforementioned sets you'll recall the difficulty in followingthe layered construction through the instruction manual. Thankfully this set is not as mindwarping, and while 75187 BB-8 has nearly half the parts as the Darth Maul and R2-D2 builds, it packs in four times as much detail and with it's mechanisation is much more rewarding as a result.

The core of the construction is a Technic frame that houses the mechanisms that allow for the set's motions and allows five panels and the head to attach to. Crucially the build makes use of colour referenced bricks throughout so that you can keep the build orientated correctly, a technique any time-travelling LEGO set designers should take back to the early 2000's and retcon into the two earliest character sets.

All told it takes around four hours to put it together so you can enjoy the two action features - the bobble-head and the flame thumb, both of which are pretty nifty. This set looks great on display (when the sloped bricks don't comr off) and the spinning head and pop-out limb are great for when you wantto show this set off. And if you really want to make this little guy pop then look to Light My Bricks, who have a lighting kit (which we will be reviewing soon) that really brings the set to life.

If none of the above catch your eye there are also a number of ancilliary items that can help you feed your appet(BB-)8 for this mischievious droid. 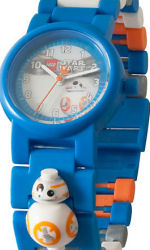 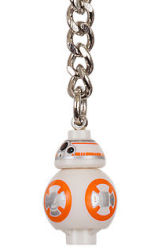 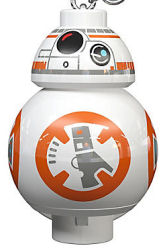 Some of the links in this article use affiliate schemes to help to support Rebelscum's ongoing effort to bring the best LEGO Star Wars collecting news we can, at not cost - but great benefit - to you.
SEND