Twenty Years Of LEGO Star Wars Celebrated At Fan Expo
Posted by Jeremy on August 30, 2019 at 07:53 AM CST
Where ever it has been 2019 it has been the 20th anniversary of the release of the first LEGO Star Wars sets, and this month the celebration moved to Toronto, Canada for not one but two special events.

To mark the 20th birthday of the LEGO Star Wars license, LEGO released five commemorative sets with limited edition minifigs at the start of April, 2019, then they put out the party pies and fairy bread at their Star Wars Celebration Chicago booth in April, and again in May when both Munich in Germany and Sydney, Australia held special May The 4th Be With You parties.

Since then LEGO fans have been letting the cake and jelly settle in their tummies - until Toronto played host to twin events last week.

In advance of the annual Fan Expo Canada, which ran over the weekend of August 19th and 25th, LEGO Canada re-unveiled the world's largest collection of minifigs at Union Station. Initially revealed at Star Wars Celebration in Chicago, this gave fans another chance to see what 36,440 stormtrooper minifigures arranged in the shape of a stormtrooper helmet looks like. Hashtagamazing! 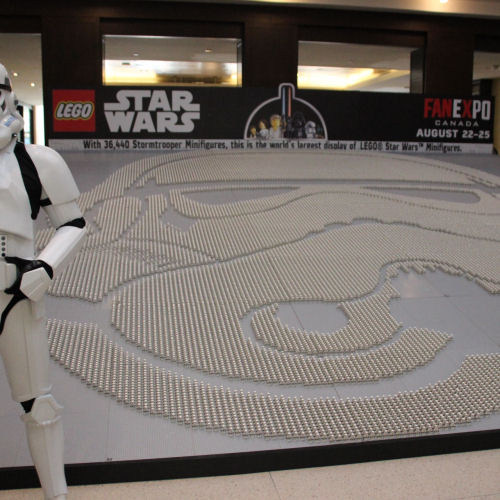 Image courtesy of The LEGO Group
It gained so much attention from commuters and Star Wars fans that a squad stormtroopers from the 501st Legion stormtroopers had to be deployed to ensure the security of their minifigure brothers.


During the Fan Expo Canada convention, which saw fans from all continuities and universes gather at the Metro Toronto Convention Centre for a full week of festivities, LEGO put on a Star Wars-centric show that turned heads and drew crowds.

While the centrepiece of their booth on the main floor was the life-size, brick-built Millennium Falcon cockpit that appeared at the premiere of Solo: A Star Wars Story - and was inexplicably lacking from the LEGO floor space at Celebration - it was the presence of Michael Lee Stockwell who made a real impression. 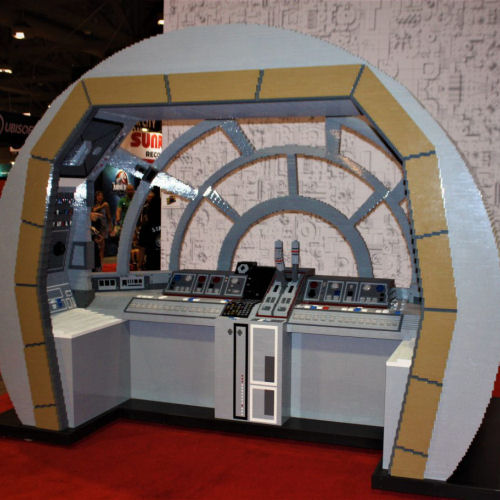 Photo credit to That Hashtag Show
Michael, who is originally from Canada and travelled from Denmark to make a special appearance at the event, took time from his busy calendar to answer a few quesitons. Having worked at LEGO for 13 years - and spent most of the last decade on the LEGO Star Wars team - he credits his career to realising a need to be able to express his creativity. For most this would have meant an education in art or graphic design, Michael studied jewelry arts and goldsmithing which lead to a 20 years as a jewelry designer. While he never expected to work for LEGO he was quick to grab the chance when an opportunity popped up that allowed him to combine his design skills with his most cherished childhood toy.

Explaining his transition from bracelets to bricks further, Michael commented that his move to the LEGO Star Wars design team came about when they were looking for someone who could not only design sets but also drive the development of new elements. Since that day he has worked on a number of milestone projects, including 75192 Millennium Falcon and the crowning glory of the 20th Anniversary edition subtheme - 75243 Slave I. 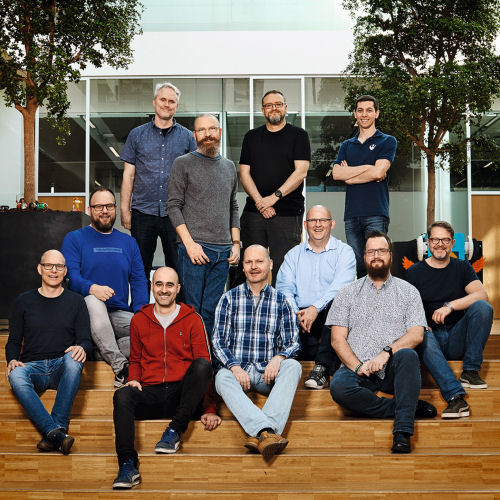 Image courtesy of The LEGO Group
The group of designers and builders who worked on the 75192 Millennium Falcon team, led by Hans Burkhard Schlömer, each brought their own skills to the round table. The original design by Jens Kronvold Frederiksen was seen as the blueprint for scale and his legacy of experience was essential, but when it came to constructing the support frame for the largest and heaviest of Star Wars sets they had to seek help from the Technic group to create a framework with the structural integrity needed to support the approximately 2500 extra pieces that were used in the update. No-one wanted a repeat of the drooping skeleton the original UCS Imperial Star Destroyer suffered from. The lessons learned from this fix are still paying off.

Regarding his work on the Millennium Falcon team, Michael's expertise as a master of elements helped add an essential and original touch to the finished model. "I remember that Hans was looking for the ideal element to complete the Falcons round radar disk. After studying the reference photos, I ran down to our element stock and came back with the hat from the Ninjago Sensei Wu minifigure. All it required was a colour change, and we had the perfect detail."

Michael can also be credited with the minifigure scale porg that came with the set. As development work on 75192 Millennium Falcon was drawing to a close, stills from the production of The Last Jedi arrived at LEGO just in time for Michael to have a lightbulb moment and realise that the top dome of the BB-8 droid was a perfect match for the tiny inhabitant of Ahch-To.

So while Michael might not have had a huge amount of influence on the final version of the world's biggest LEGO Star Wars set, it's fair to say that his detailing added to the model's finishing touches. The opposite can be said about his involvement in this year's version of Slave I though, because his proverbial finger prints are all over the design of this model. 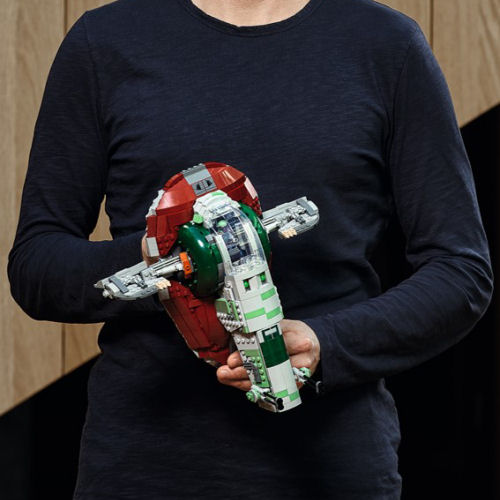 Image courtesy of The LEGO Group
"Whenever we develop a model that we have done previously we always start from scratch. We gather consumer feedback from previous models, consider if there is any new functionality we would like to incorporate or are there any new elements needed? We discuss our design ideas with Lucas/Disney and very importantly we regularly put the model in the hands of children for testing.

We also developed a new building element in a left and right version that allowed me to create the shape of the lower rear fuselage.

I put a lot of effort into improving the aesthetics, to closer match reference, but at the same time I focused on creating a stable model and an enjoyable building experience."

Being a "huge fan" of Boba Fett's vessel of choice, Michael was very pleased to be asked to be in charge of the set's re-design. Particular attention was paid to getting the balance of between aesthetics and playability just right - and one new feature fulfilled a big part in his goal.

Collectors who own the original Slave I that Kenner released as part of The Empire Strikes Back collections in 1981 will recognise a particularly useful design feature that Michael fully accepts was inspired by a nearly 40 year old toy.

"The idea for the handle came out of one of our so called kids tests where we could see that children found it challenging to swoosh the model and trigger the missiles at the same time. One of my design colleagues told me that the original Kenner toy had a handle on the back. This prompted me to design a handle that would fold out of the way when the ship is 'landed' or displayed." 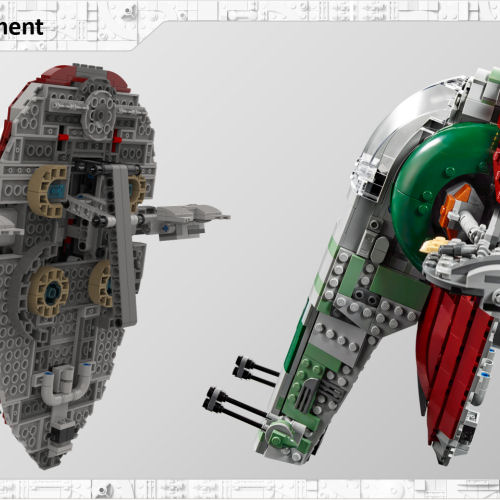 Image courtesy of The LEGO Group
With the advancing build techniques and new elements being created, some fans worry that LEGO Star Wars sets will become so evolved that one day there won't be a way to improve them? Michael doesn't share this fear though.

"We are continually finding new ways to put these bricks together, and new elements are continually being developed and added to this fantastic System. This just increases the number of potential combinations. We are always trying to push the boundaries of creativity and imagination as it relates to discovery and play. Were always going to try to create the best experience for the young and the young at heart. That combined with the fact that the Star Wars galaxy is still growing convinces me that we wont run out of ideas any time soon."

Speaking of new ideas, Michael is tight lipped about what his dream LEGO Star Wars project is. All he would say is that "if I tell you, I could end up spoiling a surprise, but as you know there is a big movie just around the corner Lets see if something new pops up!" There's spoilers and there's spoil sports and Michael errs on the side of the latter!

Reflecting on the opportunities he has had and the luck that has brought him to where he is today, Michael is very understated about his abilities and skills. Instead he prefers to focus on what LEGO is able to deliver, saying that "where LEGO Star Wars is concerned, it is amazing that we are able to give so many children and fans a fantastic Star Wars experience through our LEGO models."

With all the attention the 20th anniversary of the LEGO Star Wars license has received during 2019, Michael's most cherished experience of the year is surprisingly sentimental.

"Going home to Ontario, Canada for the Canadian celebration of the 20th Anniversary of the LEGO Star Wars collaboration is definitely a highlight for me! Bringing the celebration back to Canada is kind of like a coming home party for me. The LEGO Star Wars collaboration started 20 years ago, but it has been a huge part of my life for the last 12 years. Now I get to share it with LEGO fans at home in Canada!"