AU News: LEGO Announces Special May 4th Event
Posted by Jeremy on April 22, 2019 at 04:38 PM CST
For the first time ever, Jens Kronvold Frederikson, LEGO Star Wars designer for 20 years, will be flying down under from LEGO HQ in Billund, Denmark to be a part of this epic occasion, treating guests to a once in a lifetime opportunity to meet and build with a real-life LEGO Star Wars designer.

And all it took was for the LEGO Star Wars line to turn 20! 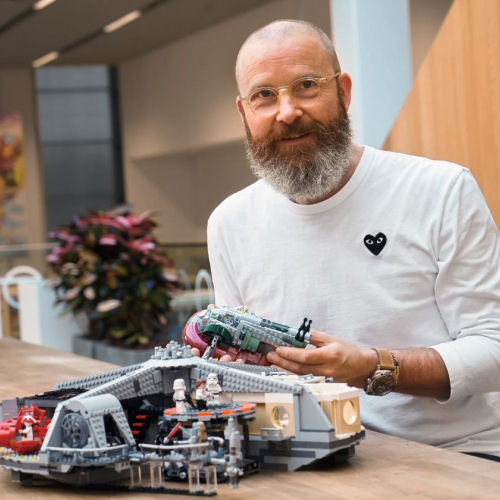 Also appearing is Ryan McNaught, the only Certified Professional Builder in the Southern Hemisphere who has been the primary builder to the weekend's surprise reveal.

In an action-packed weekend, kids (and grown-ups!) will have the chance to help unveil the secret LEGO Star Wars model, play along with Jens in creative workshops and tour his studio, view historic LEGO Star Wars products, battle it out in LEGO Star Wars trivia and build an exclusive mini LEGO model to take home.

Young and old Jedi are encouraged to don their favourite Star Wars costumes for the chance to win prizes for best dressed. Die-hard fans can also go in the running to win LEGO Star Wars prizes across the weekend.

Join forces with members of the 501st Legion on Saturday to lay the final piece of the model at 2pm and raise your lightsabers to toast to 20 years of some of the greatest battles ever built.

Previous big LEGO builds that Australia has played host to was a giant Death Star in 2017 and an over-sized Millennium Falcon in 2015. It seems that with this new addition to the calendar there's a two year cycle, and we're predicting a titanic Tantive IV, for no other reason thn that's what we want to see!

Rebelscum caught up with Jens during Star Wars Celebration Chicago and pumped him for details. The only comment he would commit to is "LEGO is keeping it very secret" - so secret that maybe Jens doesn't know?

And if all of this isn't exciting enough for you, there's a chance to win the latest UCS set - the impressive 75192 Millennium Falcon!
SEND