AU News: More May 4th Events From LEGO
Posted by Jeremy on April 28, 2019 at 11:50 PM CST
This weekend sees the annual May The 4th Be With You event and is one of the highlights of the LEGO calendar, and this year - with a very special event being hosted by LEGO - is no different.

What can LEGO retailee's expect this coming weekend? The good news is that - in the main - LEGO is bringing in the same May 4th Be With You experience that will be enjoyed in North America and Europe, with the launch of this year's big direct-to-consumer set, the opportunity to earn double VIP points, the stupendous 40333 Battle of Hoth GWP model, reductions on selected sets and an exclusive art print for VIPs.

The only scheduling difference is that LEGO stores in Australia will not be hosting the mini-scale Tantive IV make & take for children. This is only because the three LEGO outlets in the country are not brand stores, but certified stores run by third parties which LEGO is not always able to accommodate for in the same way as they can guarantee the calendars of the brand stores directly operated by LEGO. 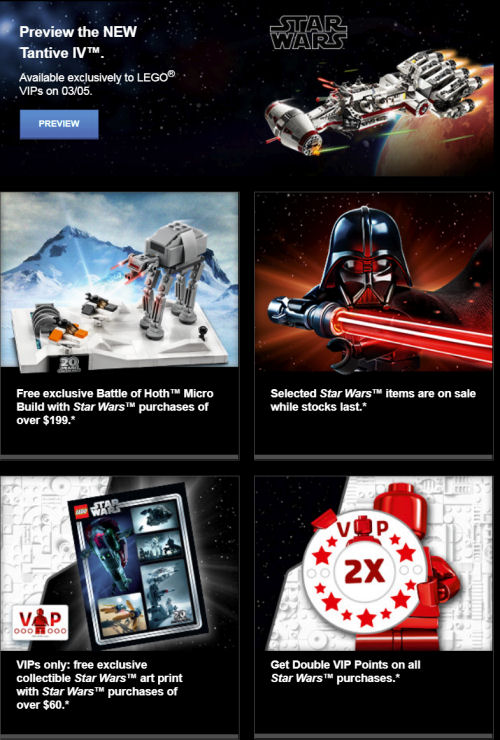 That's not the only downer though, because a number of eagle-eyed recipients of a recent LEGO mail blast have noted that the minimum spend to receive the exclusive 40333 Battle of Hoth set and 20th Anniversary poster is out of skew with the rest of the world. The requirement for Australians to spend AU$199 (the equivalent of US$140) instead of US$75 to receive 40333 Battle of Hoth, or AU$60 (approximately US$42) rather than $35 for the poster is due to a phenomenon known as Australia Tax - a practise that LEGO, along with many other retailers, has been complicit in.

For a long time Australian fans of LEGO Star Wars have been reliant on the planning and coordination of US shipping centres, where orders originating in Australia, New Zealand, and parts of South-East Asia were fulfilled from. That all ended late in 2018 when LEGO opened a dedicated Asia-Pacific distribution centre on the island continent, with the promise of faster shipping times, better quality stock and options - as well as equality when it came to promotions in what locals hoped would be an end to the unfair Australia Tax practise.

Sadly the opening of this new hub came after the Australian recommended retail price for 75192 Millennium Falcon was set at $1300, which was the equivalent of US$1000 at a time when the same model had an $800 tag in the US.

It was expected that these disparities would be ironed out as a result of a domestic warehouse, and local pricing and shipping rates would fall closer in line with other LEGO regions. While many shoppers have noticed that orders have arrived in a shorter time and in better condition, and returns have been handled more efficiently, the continuation of Australia Tax has meant that customers in Australia nd New Zealand are often paying more than those in North American and Europe.

Instead they are running their own programme of events between May 4 to 5th:

75212 Kessel Run Millennium Falcon will be 30% off
75244 Tantive IV will go on sale
all LEGO products will earn double points on this certified stores independant VIP programme
the 501st will be present to ensure all loyal cizitens of the Empire behave appropriately!

No confirmed plans yet

No confirmed plans yet

We have reached out to the management at the Bondi Junction store in Sydney and the LEGOLAND Discovery Centre in Melbourne, as well as LEGO Australia's public relations office and will share any updates to the domestic schedule.
SEND