LEGO: 75252 Mystery Set Teased
Posted by Jeremy on December 24, 2018 at 12:49 AM CST
Readers may remember that the speculative 2019 list we posted in October included an unknown UCS set of the same number that we expected to be released in May.

Information just made available by Hungarian toy retailer Kockashop throws a bit more light onto this set - including the piece count. 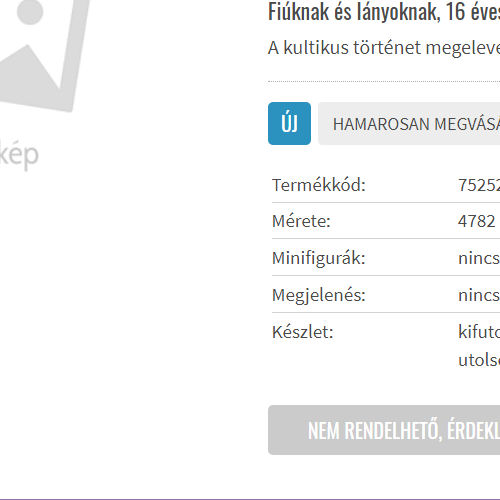 For those of us who don't speak Magyar a rough translation of the text is as follows:

For boys and girls, 16 years old
The cult story unfolds ...

Follow the story of the Republic and the Empire, play your favorite scenes, your battles from the movies and become part of this truly legendary story! Many of your favorite characters, a LEGO vehicle, you will definitely find your favorite among them! Do you have a lightsaber?

The cryptic description is almost certainly a placeholder so no clues can be gained from it. However the 4782 piece count, which puts it in the upper 25% of Ultimate Collector Series sets (which you can learn more about in our recent article), is believed to be accurate. The more sleuth-like reader will realise that sets like 10030 Star Destroyer, 10143 Death Star II and 10121 Super Star Destroyer are in that bracket too.

Fans have seen part counts increasing with the most recently re-modelled UCS sets like the 75144 Snowspeeder (16%), 75181 Y-Wing Starfighter (31%) and 75192 Millennium Falcon (45%) so a detailed spacecraft of the Imperial variety might appear on shelves in October, which is a traditional time of year for an UCS set to be released.
SEND