LEGO: May The 4th Be With You Promo in Hungary
Posted by Jeremy on April 22, 2019 at 06:53 PM CST
The annual celebration of all things Star Wars has always been a big event on the LEGO calendar ever since they first started running special promotions in 2009.

More often than not LEGO has featured polybags and small builds, with the occasional early bird VIP shopping opportunity and gift with purchase for online orders. This year - being the 20th anniversary of the LEGO Star Wars line - they are adding a ninth item to the subtheme which already includes five sets, a clock and watch as well as a convention exclusive from last week's Star Wars Celebration in Chicago - which is periodically available through Target.com for REDcard holders. 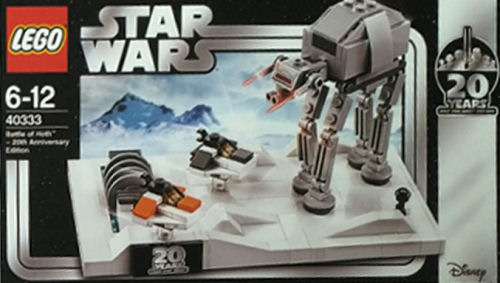 This exclusive 40333 Battle of Hoth - 20th Anniversary Edition set, which depicts mini-scale vignette of the pivotal Battle of Hoth from The Empire Strikes Back, has been discovered in a LEGO store calendar from Hungary.

As noted by Brick Fanatics, who alerted us to the news, "Theres no word yet on just how or when the promo will be available in most territories. However, the Hungarian calendar  which can be found at Budapests Certified LEGO Store  says it will be free with LEGO Star Wars purchases above 14,999 forints (around £40, or $52) for the entire month of May."

Typically May The 4th Be With You promotions run for two days - five at the most - but the translation indicates it will run for the entire month!
SEND