LEGO Star Wars Video Games Spinoff
Posted by Jeremy on September 3, 2019 at 04:20 AM CST
It's been nearly a year since LEGO Star Wars All-Stars animated TV series streamed on DisneyXD and with no home release on the horizon it was looking like LEGO had finally given up on the format. However a trade catalogue unearthed by Fantha Tracks suggests this may change with a spin-off series attached to LEGO Star Wars: The Skywalker Saga coming next year. 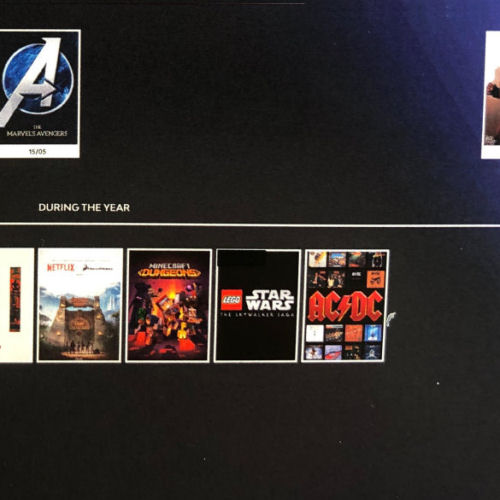 The image above, taken from a catalogue that was distributed at a licensed merchandise trade fair in August, show a timeline of a number of key intellectual property releases during 2020. Tucked down on the bottom line, marked 'during the year' is a black rectangle with the familiar logo that was first displayed with the LEGO Star Wars: The Skywalker Saga Press Release following the games announcement during E3.

It's roundly believed that the next LEGO Star Wars video game, which will encompass all the main films (and will exclude Solo and Rogue One) that tell the tale of the Skywalker family, will be released in April or May and will not require a year-long licensing campaign. Hence the belief that there will be a TV series. Muddying the waters somewhat are the other IPs on the line are a variety of video games and TV series, and comments that Wil Film and Bill Motz/Bob Roth will be involved is purely conjecture at this point.
SEND