LEGO Star Wars Mosaic All But Confirmed
Posted by Jeremy on May 17, 2020 at 07:58 PM CST
Since making its first appearance at the rumour mill last month, the expected 18+ Darth Maul mosaic has taken another step towards factuality with a listing on a Slovakian model shop's website. 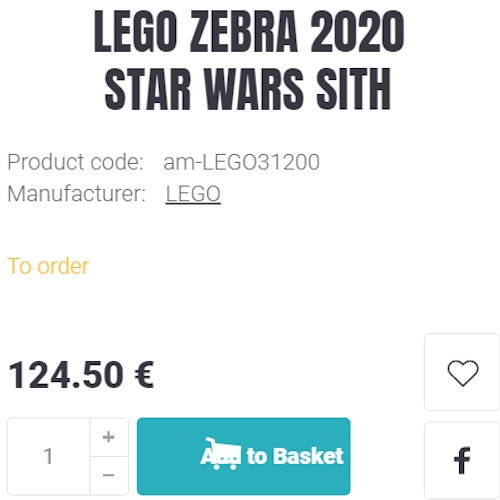 Like the surprise news of 75318 The Child, which also came through the addition of a placeholder page on the Modely website, Svet Modelov in downtown Koice currently has a listing for 31200 LEGO Zebra - Star Wars Sith on their website. Interestingly the original rumour, initially reported by Brick Fanatics, had this mosaic down as a depiction of Darth Maul. However, the Svet Modelov page names it as "Sith" and further searches for Zebra - being the codename for the new 18+ mosaic theme - has the other mosaics in the line listed with very obvious names, suggesting that the Star Wars mosaic might be a combination of characters instead of a singular visage.

The word that LEGO is adding a range cross-IP mosaics has some fans scratching their heads - so it is worth remembering that LEGO has a long history with Star Wars mosaics.

Their first, in 2005, was a cross-promotional tie-in for Revenge of the Sith and M&M chocolates. Though technically not a mosaic, in 2008 a group of LEGO employees assembled 35310 clone trooper minifigures into a miniature Grand Army of the Republic to capture the record for the world's largest display of LEGO minifigures.

After a two year gap LEGO invited attendees of Star Wars Celebration V in 2010 to help assemble a massive mosaic that marked the 30th anniversary of The Empire Strikes Back and then in 2012 the LEGO May The 4th Be With You event included virtual mosaics that encouraged fans to upload pics of their LEGO Star Wars creations. It wasn't until 2016 that the next official Star Wars mosaic building event occured at the LEGO Star Wars Days weekend (April 30th to May 2nd) held at LEGOLAND Windsor.

Check out the completed mosaic from LEGO Star Wars Days - it's made from over 70,000 individual LEGO bricks! pic.twitter.com/qFKqzVlwYE

What do you think of the decision by LEGO to create an adults-only Star Wars sub-theme? You can share your thoughts over in our discussion forum.
SEND