LEGO: The Child Is Coming
Posted by Jeremy on May 12, 2020 at 03:58 AM CST
Since the world was exposed to The Child, the break out star of The Mandalorian, every licensee has been scrambling to catch up with the bandwagon - and LEGO, no doubt after seeing the plethora of custom builds on the Internet, got word out that not only would they have a minifigure of The Child included with 75292 The Razor Crest but a BrickHeadz version in 75317 The Mandalorian & The Child - both in time for The Mandalorian's second season.

It appears that there is also a larger scale version coming! 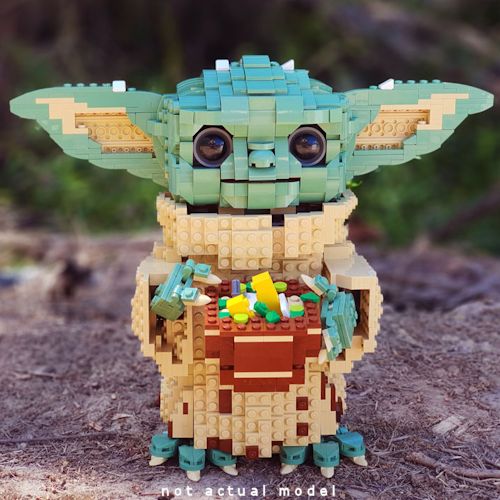 The rumour mill started turning a week ago when word began to circulate that a display set similar to the recently released 75255 Yoda was in the works, and now Slovakian verified LEGO re-seller Modely has added a listing for 75318 LEGO Star Wars - Dítě to their website. A quick trip to Google translate reveals that dítě means baby or child in Slovak.

Aside from the set number and this tidbit of info the only other piece of information is the Eurozone price of 75.42, which is roughly equivalent to $80. If this conversion is accurate it puts 75318 The Child piece count at around 1650.

When this set - if it is real - is due out is a question that doesn't have an answer yet. If you can't wait then head over to Rebrickable.com and check out Allouryuen's alternate build (shown above) of 75255 Yoda, which is currently available through the LEGO website.
SEND

Boba Fett (from The Book of Boba Fett)
Phoenix Board # 216: Andor is great, Happy Thanksgiving.
Recent Acquisitions - The Vintage Collection
The next big ticket item?
My Pop-Up Playsets
DeAgostini / Altaya is back with a new ships & vehicles subscriber line (so far, only in France)
Jazwares Star wars Micro Galaxy Squadron