LEGO Italy Calendar Confirms Battle Of Endor GWP
Posted by Jeremy on September 10, 2019 at 04:46 AM CST
It wasn't long ago that pics of the Endorian version of 40333 Battle of Hoth - 20th Anniversary Edition first immerged and collectors began to speculate on the double-u's of its distribution.

And now, thanks to Mattonito RLOC who found the LEGO store calendar for October, we have the details. 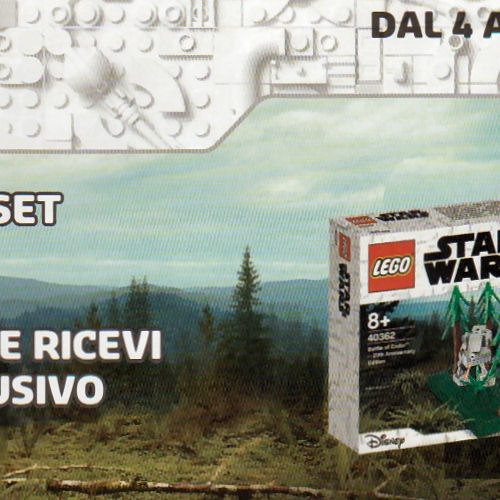 What: a 197 piece limited edition set of the Imperial bunker on Endor

Where: LEGO retail stores (brand and certified) and online

Why: to mark the official launch event for The Rise of Skywalker merchandise

So we've only got confirmation that this giveaway is taking place in Italy, but there is absolutely no reason to suppose that it won't be available in the rest of the globe's regions that LEGO operates retail outlets in. So if you are worried you'll have to resort to the secondary market or call in favours then you can breathe.

We'll be back with more news on this - and any other LEGO Star Wars promotions - as we receive updates.
SEND