Unlike the gala release event that took place for the launch of 75192 Millennium Falcon, the debut of The Devastator occurred at lunchtime on a Sunday.

"I was relieved for those lining up that the LEGO Store held this event at midday rather than midnight and that the weather was good for it." said Graham, packing his cagoule away for the day. 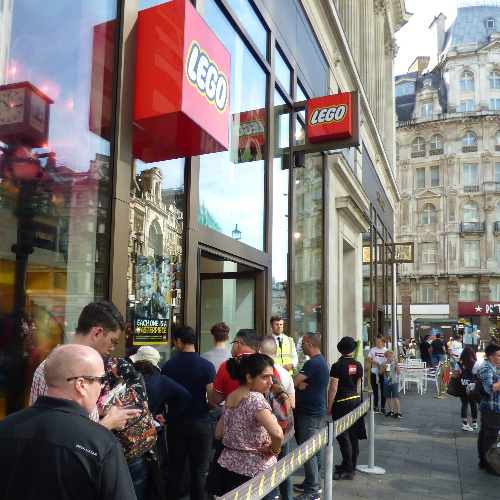 Outside the London store VIP shoppers, who started lining up on Friday, were kept under control by UK Garrison members of the 501st Legion in an area cordoned off along the pavement. At the stroke of noon they were ushered through the doors and into the ground floor where they collected their 75252 Imperial Star Destroyer, a complimentary mystery box of LEGO Star Wars polybags and a 40336 Newbury Juice Bar from the brand new Hidden Side theme.

Graham, sporting a knitted v-neck sweater, commented that "the turnout was good for this one considering that it is quite an expensive purchase" with shoppers not only able to pick up the £649.99 set before anyone else in the world, but meet the man responsible and get his golden mark on their purchase and a limited edition certificate of authenticity. 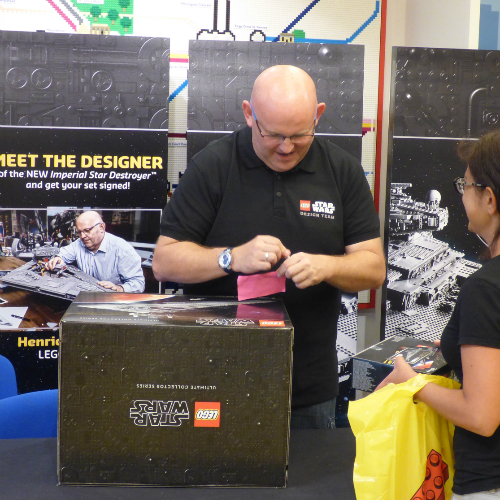 While the focus might have been on the Star Destroyer, the real star of the show was Henrik Andersen, one of the senior designers on the LEGO Star Wars, who had flown over from Billund just for the occasion. Asked what his favourite aspect of the latest version of the Empire's grey triangle of stellar destruction his response was immediate:

"I really like the way we managed to get so many details on the model, especially all the asymmetric details, the docking bay, differentiated laser cannons, super detailed bridge, the dome on the underside and a detailed docking bay."

Those wanting to get their set signed and pick up the certificate of authenticity to prove they'd spent £650 of their money on the 75252 Imperial Star Destroyer were directed towards Henrik who was taking time to chat with shoppers, as well as pose for photos, while he directed his gold Sharpie across the box's surface. 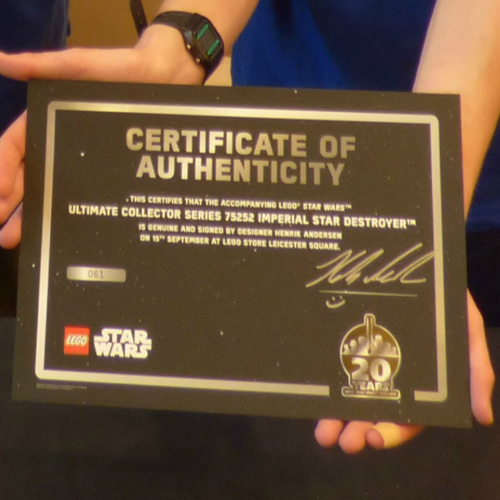 Despite the hype the set has received and the advance notice that the London store's launch party was afforded not all of the specially stocked two hundred sets sold, with around 25% of the initial stock left for Thursday, September 18th - the official VIP launch day. Many shoppers were put off by the size and weight of the box - which was practically the same as the 75192 Millennium Falcon set that came with cardboard wheels and a handle - knowing that they would have to lump it across the city on London's public transport system.

With flared trousers covering his leather sandals, Graham shared that "No matter what the pricetag is, LEGO Star Wars fans like big, beautiful models." before heading off to the Underground to do some train spotting. 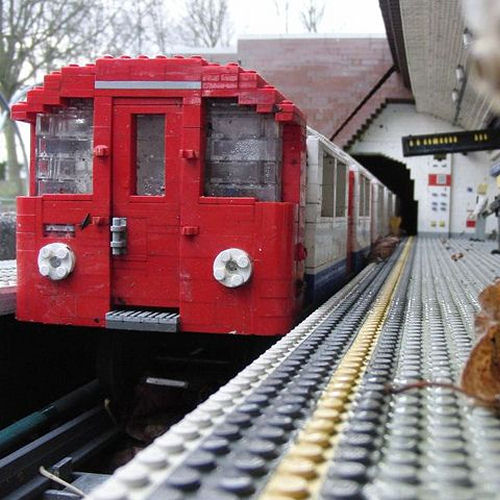 The too-bulky-for-public-transport 75252 Imperial Star Destroyer will be available on Thursday, September 18th for VIP Rewards members and on October 1st for everyone else.

Save yourself the trouble of carrying this set across the parking lot to your car and order it through LEGO.com to get it carried to your front door by someone else - for free! Doing so will save you a bill from the chiropractor and using the links provided will help to keep Rebelscum providing you awesome LEGO Star Wars news at no extra cost.
SEND